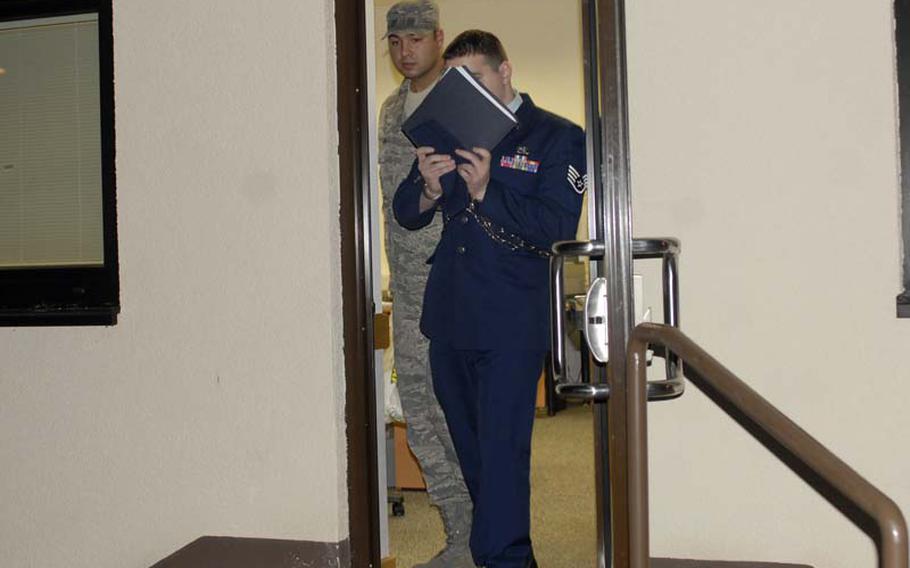 RAMSTEIN AIR BASE, Germany &mdash; An Air Force staff sergeant who posed online as a trusted baby sitter to troll for victims was sentenced to life in prison without parole on Friday after pleading guilty to multiple counts of raping and molesting three girls, two of them preschool age.

Staff Sgt. Joshua Adam Smith, who had advertised baby-sitting services to the Kaiserslautern military community and proclaimed his compassion for children in an online forum, told the judge he had sexually assaulted the girls &mdash; then ages 3, 4 and 7 &mdash; over the last year.

Military prosecutors had argued that life behind bars was the only way to stop Smith from sexually abusing young children.

In an unsworn statement before sentencing, Smith told the judge, &ldquo;I am disgusted by myself&rdquo; and he said he &ldquo;didn&rsquo;t know how to stop it&rdquo; on his own.

Molesting his young victims became easier when the children didn&rsquo;t tell on him, he said.

&ldquo;It became easier to justify for the next time when nothing happened,&rdquo; Smith said as he cried during his statement.

Eventually one of them did tell.

The mother of one victim, who was 7 years old when Smith began molesting her last year, tearfully testified that Smith baby-sat her daughter four times.

&ldquo;She came to me one day in April while we were getting ready for a family outing and told me her concerns,&rdquo; she said. They went directly to the military police.

Smith was apprehended April 30 and has been in custody since then.

&ldquo;I want to say how very proud I am of my daughter for coming forward so he can be put away,&rdquo; the mother said after the trial.

Smith was expected to be jailed immediately at the military&rsquo;s confinement facility in Mannheim, until Air Force corrections system officials determine where he will serve the rest of his sentence, military officials said.

During Friday&rsquo;s proceedings, the 27-year-old communications and navigation systems technician said he grew up in a military family, the second oldest of six children. He said his father, a career Navy man, was often absent from home and his mother had trouble managing the large family. Smith said that he became involved in &ldquo;sex play&rdquo; with his siblings at the age of 10. He has been &ldquo;sexually obsessed with young children for a while,&rdquo; he said. &ldquo;I know I need to get help.&rdquo;

Smith was painted as a study in contrasts. Forensics psychologist Rex Frank, who testified for the defense, said Smith was introverted and shy, yet was able to strike up a quick friendship with the victims&rsquo; mothers and earn their trust.

The mother of the 7-year-old testified that she first came into contact with Smith a year ago, when she posted an ad for a baby sitter on ramsteinyardsales.com. She initially ignored Smith&rsquo;s reply offering his services.

&ldquo;He was a guy, a single airman, I figured he had better things to do than baby-sit,&rdquo; she said. Smith actually has two sons and is separated from his wife.

But then someone named &ldquo;Yvonne&rdquo; contacted her via an online &ldquo;chat,&rdquo; saying she should consider using her baby sitter &mdash; Joshua Smith. She took the advice, not knowing that Smith was using &ldquo;Yvonne&rdquo; as an alias to provide references for himself.

Statements in court revealed that &ldquo;Yvonne&rdquo; was Smith.

He also started a thread on ramsteinunderground.com about the benefits of using male baby sitters. He did this &ldquo;to dupe parents, to groom parents, to bring them into his fold,&rdquo; said lead trial counsel Capt. Christopher Goewert.

Smith also lied online about working at the child development center while he was stationed at Offutt Air Force Base in Nebraska, according to prosecutors.

That false information helped sway the mother of Smith&rsquo;s 3-year-old victim to hire him as a baby sitter, after she too placed an ad on ramsteinyardsales.com.

&ldquo;It&rsquo;s hard to find an adult baby sitter and someone who has a background in child care,&rdquo; the mother testified Friday. She was pleased when Smith told her that he and her daughter &ldquo;did a lot of reading, ABC&rsquo;s, hide-n-seek.&rdquo;

Two of the mothers and one of the fathers spoke in court of the effect that the sexual abuse has had on their daughters and their families.

&ldquo;She will not go upstairs alone, she will not use the bathroom alone, even if I can see her,&rdquo; said the mother of the 7-year-old. &ldquo;She would rather wet her pants or the floor rather than be alone.&rdquo;

&ldquo;I worry that she&rsquo;ll never be the same,&rdquo; she said.

Parents of two of the victims exchanged a tearful hug in the courtroom after Smith was sentenced.

&ldquo;That&rsquo;s what I wanted,&rdquo; said the mother of the 3-year-old. &ldquo;There&rsquo;s a chance he might have done it again.

&ldquo;You&rsquo;re just kind of standing back for the rest of your life hoping she won&rsquo;t remember.&rdquo;

Officials did not reveal whether they suspect Smith of having molested other children at Ramstein or on other bases where he has been stationed, including Incirlik Air Base in Turkey and Offutt.

Air Force records indicate that Smith joined the Air Force in 2001 and arrived at Ramstein in December 2007.