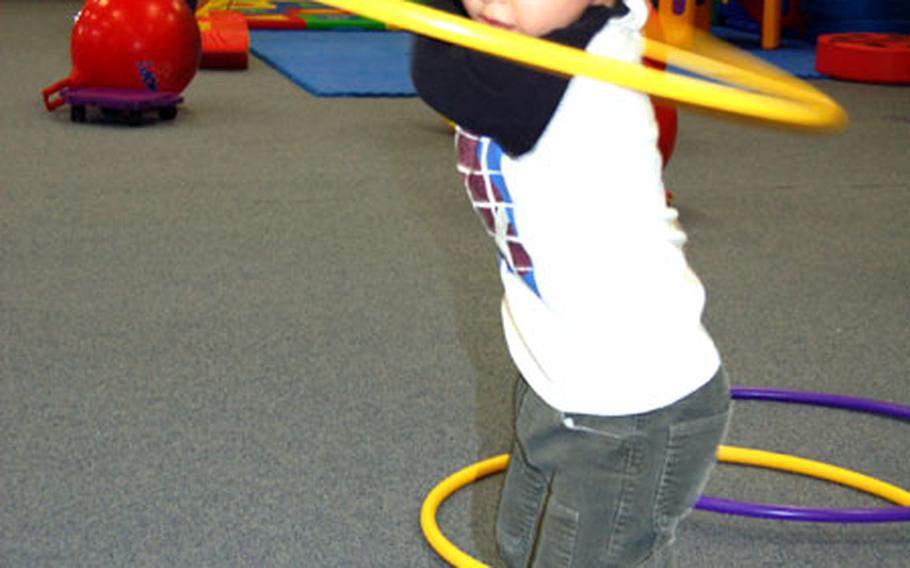 Ryan Clyncke, 2, plays with a hula hoop at the Yongsan Garrison Child Development Center. The center recently received notice that it had received accreditation by the National Association for the Education of Young Children. (Jimmy Norris / S&S)

YONGSON GARRISON, South Korea &#8212; In a world filled with plastic dinosaurs, giant bouncy balls and Dr. Seuss books, most of the people in Yongsan Garrison&#8217;s Child Development Center have little on their minds other than nap time.

Mohn said the CDC staff members recently learned they earned their National Association for the Education of Young Children accreditation.

She said the Jan. 3 notification ended a yearlong process of applications, inspections and hard work.

&#8220;NAEYC accreditation demonstrates to families, whether military or civilian, that we are meeting national standards for quality child care,&#8221; Mohn said.

During the process, the CDC went through a self-assessment and on-site inspection.

NAEYC accreditation is awarded to facilities that meet or exceed standards in 10 categories, including positive relationships, curriculum and effective teaching approaches.

Within the 10 categories, facilities are judged on 400 criteria.

The Yongsan CDC underwent a two-day inspection in October.

Even though CDC didn&#8217;t receive notification for almost three months, Mohn said there was no nail-biting during the wait.

Eight of the center&#8217;s 16 classrooms were inspected. The lowest-scoring classroom received a 96 percent and the highest received 100 percent.

Mohn said the scores put Yongsan&#8217;s CDC among the highest scoring in the Department of the Army.

She said the inspector was especially impressed with the center&#8217;s indoor playroom, the CDC T-shirts worn by the staff to show unity and the unusually high number of male staff members working there.

About one in four staff members at the CDC is male, something Mohn said is very rare in Department of Defense day-care facilities.

One father whose children are in CDC said he likes the care better than when he hired a nanny and tried off-post day care.

He said he thinks the accreditation process is a major contributor to his satisfaction with the CDC.