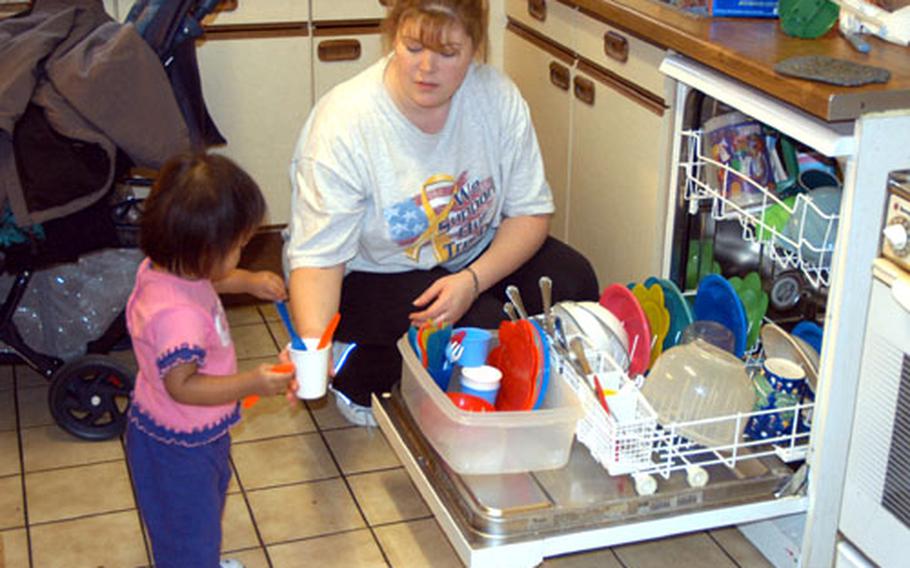 BAMBERG, Germany &#8212; Bamberg&#8217;s Child Development Center and Family Child Care Program knows how difficult it is to find a babysitter.

The center operates with only half of its 20 positions filled, and it will lose nine of its 11 family caregivers when 1st Infantry Division returns from Iraq and goes on block leave in February, according to Lily Markey and Elizabeth Marriott.

Markey is the Child and Youth Services coordinator and Marriott is the acting Family Child Care director and trainer for the 279th Base Support Battalion on Warner Barracks.

She attributes the shortage, in part, to fallout from the summer permanent change of station, or PCS, season; the time of year when many families move to new assignments to avoid taking their kids out of school midyear.

Other contributing factors, she said, include families going to the States while their soldiers are deployed to Iraq.

Currently, organizers are planning for the 1st ID&#8217;s return and impact of losing all but two of their workers.

Child and Youth Services in Bamberg currently has 42 children registered for day care, and there are nine children on the waiting list.

If a baby boom hits Bamberg when the more than 1,000 soldiers from Warner Barracks deployed to Iraq reunite with their families, as it has in other military communities, there could be many more infants added to the waiting list, Markey said.

To become a child-care provider in one&#8217;s own home, a person must submit to a background check. The check looks primarily for any instances of spousal or child abuse in an applicant&#39;s past. There is a credit check, but that is not necessarily a deciding factor in an applicant&#8217;s hire.

In that instance, a quality review board comprised of representatives from the Judge Advocate General&#8217;s Office, Provost Marshal Office, Social Work Services and Child and Youth Services convene to determine whether the results warrant refusing employment, Markey said.

At home, child-care providers can care for up to six children with no more than two infants and no more than three children under age 3, Marriott said.

All family members in the home over age 12 have to go through a background check as well, Marriott said.

Allison Tucker has been a child-care provider since 2002, but took a one-year break while her husband was deployed.

Her living room is sectioned off to accommodate children, and all guests who visit while she has children over have to sign a log sheet.