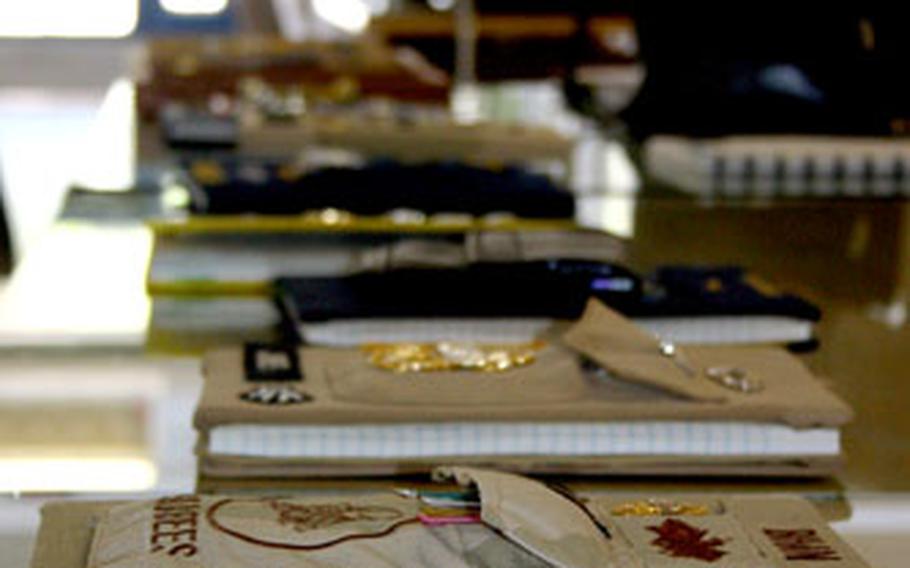 An enduring tradition of the promotion from E-6 to E-7 in the Navy includes the keeping of a “charge book.” One after another, selectees’ decorated charge books stretched across a cafeteria table at the Naval Station Rota, Spain, CPO academy site on Camp Mitchell. Inside, presumably, are words of wisdom chiefs penned to their understudies. (Sandra Jontz / S&S)

An enduring tradition of the promotion from E-6 to E-7 in the Navy includes the keeping of a “charge book.” One after another, selectees’ decorated charge books stretched across a cafeteria table at the Naval Station Rota, Spain, CPO academy site on Camp Mitchell. Inside, presumably, are words of wisdom chiefs penned to their understudies. (Sandra Jontz / S&S) There&#8217;s no pressure like having the entire Navy watch to see if you make the grade, says prospective Chief Petty Officer Monish Bhan.

&#8220;This really all kind of depends on us,&#8221; he said last week of a historic attempt by Navy leaders in Europe to launch a Chief Petty Officer Academy.

Being among the first &#8212; a plank owner, in Navy terms &#8212; for a program that Bhan said he wants to see succeed drives the 16-year veteran to work that much harder.

The Seabee is among 82 sailors in Europe leading the Navy&#8217;s prototype of a multisite Chief Petty Officers Academy.

It was the first week of the formalized and structured training program for the soon-to-be chiefs. This year, the Navy promoted 4,744 of the 19,870 eligible petty officer first classes.

Much has changed in the two decades since Clouse and Evangelista pinned on their golden anchors. Today, sailors are building navies, not sinking them, Evangelista said.

It&#8217;s not to say that prospective chiefs of the past didn&#8217;t receive formalized training. For years, those selected for the coveted leap from E-6 to E-7 boned up on topics such as career development, writing evaluation reports, counseling subordinates, and how to carry out a chief&#8217;s retirement ceremony.

They learned how to spot a troubled young sailor and where to turn for help, and how to balance their personal checkbooks.

But they did all that on their own time.

Normally, during the six-week transition period, selectees trained and studied at night while working at their regular jobs during the day.

Now, for the final three weeks, those in Europe go to school for a curriculum other chiefs deemed relevant for developing enlisted leaders.

&#8220;You&#8217;re getting ready to go through a significant change, and I&#8217;m not just talking about your uniform,&#8221; Clouse, Command Master Chief for Navy Region Europe, told the four selectees on their second day of classroom training at RAF St. Mawgan. &#8220;Our performance is what we&#8217;re responsible for and we need to hold each other accountable.&#8221;

The pair did not visit a sixth academy site, aboard the submarine tender USS Emory S. Land, homeported in La Maddalena, Italy.

Some parts of the curriculum can be tailored to meet specific needs of the various commands, said Senior Chief Petty Officer Allen Keller, the academy director in Stuttgart. Some class work centers on the ins and outs of working in a joint-service environment, including recognition of rank insignia of sister services.

The idea wasn&#8217;t embraced by all, especially naysayers who feared tinkering with tradition would eventually kill it.

Gone are the days, they say, of initiations punctuated with drunken behavior and hazing.

Chiefs serve as technical experts and as leaders with administrative duties. Their uniform changes, and they shed the &#8220;cracker jack&#8221; uniform with white Dixie cup covers for the khakis, similar to those of officers. The process from &#8220;blue shirt&#8221; to &#8220;khaki&#8221; is steeped in tradition.

And much of it remains.