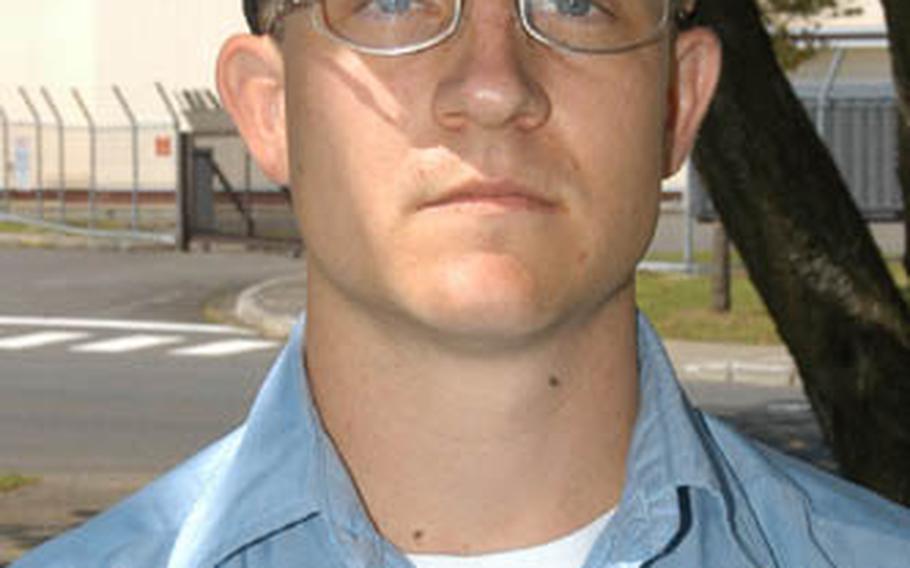 Petty Officer 1st Class David Baker, a sailor at Naval Air Facility Misawa, is one of more than 300 chief petty officer selectees this year for the Navy in the Pacific region. Most commands are holding induction ceremonies Monday and Tuesday. (Jennifer H. Svan / S&S)

The Navy was a chance for an 18-year-old from southwestern Pennsylvania to make something of his life.

Baker took hold of the opportunity and hasn&#8217;t let go.

Now 28, Baker is one of more than 300 sailors across the Pacific region who will pin on the rank of chief petty officer at induction ceremonies early next week.

"It&#8217;s a whole slew of emotions all at one time," said Baker, a mine production officer for Mobile Mine Assembly Unit Twelve at Misawa.

Baker, a Navy search-and-rescue swimmer for five years, knows the first time he slips on those chief&#8217;s khakis will feel a bit like walking in someone else&#8217;s uniform.

Navy enlisted leaders in the Pacific say transitioning to chief petty officer is the biggest career milestone in the Navy.

For all shore-based and afloat commands in mainland Japan, Okinawa, Guam and Singapore, 331 sailors were selected for chief, according to Sibal, an advancement rate of 33 percent &#8212; compared to the Navy average of 20 percent &#8212; and "the highest it&#8217;s ever been."

In South Korea, the Navy has five advancing to chief in a ceremony scheduled for Monday, according to Naval Forces Korea officials.

During the six weeks spent preparing for their new job, selectees sweated through extra physical training, pitched in to do community service, and pored over books on Navy regulations, standards and history. At Misawa, nine selectees will help out Saturday at the base&#8217;s annual Special Olympics.

"This sailor comes to you with all kinds of financial problems," Sibal said. "What are you going to do?"

Baker was struck by just how much chiefs are supposed to know and do, above and beyond typical work duties. "You&#8217;re expected to get out of your office, know your sailors&#8217; names, their families, their kids, what their personality traits are," he said.