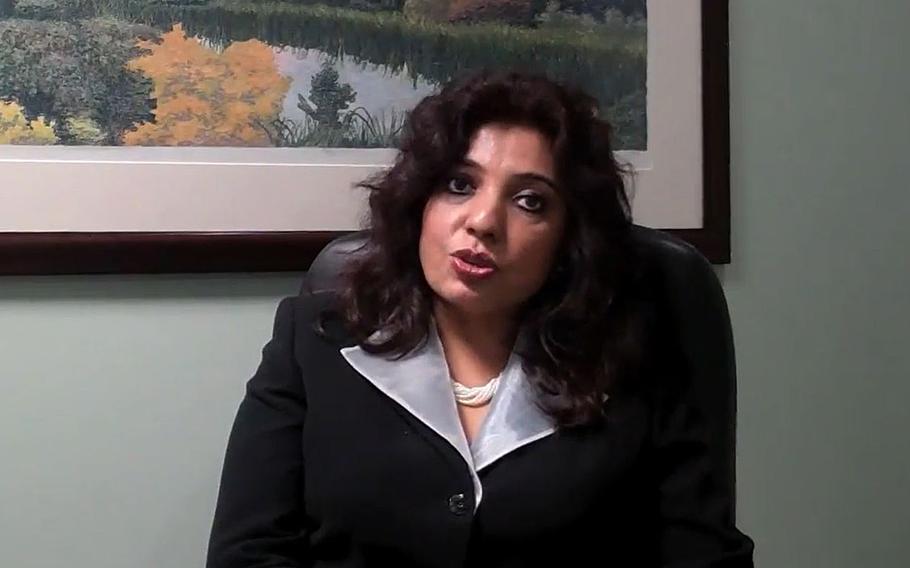 A screen grab shows Dr. Poonam Alaigh as seen in a July 2011 video post. According to a report on Friday, Oct. 6, 2017, Alaigh was to resign her post as the VA's acting undersecretary for health. (YouTube)

Dr. Poonam Alaigh, the acting undersecretary for health since May, sent a message to VA employees last week informing them she was resigning for family reasons.

“I have made the difficult decision to step down,” Alaigh wrote. “I want you to know that it has been my greatest honor to serve [VA Secretary David Shulkin], each one of you and all of our veterans. As I prepare to now leave Washington, I thank you sincerely for what you have helped us to accomplish.”

Alaigh will be replaced by Dr. Carolyn Clancy, who will take the position in an interim role. Clancy has been with the VA for more than 10 years and will now oversee a health system comprising more than 160 medical centers and 1,000 clinics that serves 9 million veterans.

The job switches hands during a time when the VA is wrangling with significant changes on how it delivers health care. The VA and Congress are expected to introduce proposals this month to overhaul the Veterans Choice Program, which allows some veterans to seek care in the private sector.

In addition to the undersecretary for health, the chiefs of the VA’s two other sectors – benefits and cemeteries – are also temporarily filled.

In March, the VA established a search commission to find a permanent undersecretary of benefits, responsible for overseeing 60 regional benefits offices that distribute billions of dollars each year among more than 4 million veterans. The commission was expected to find a person to fill the role by April 20, according to a VA news release.

Similarly, the agency created a search commission in April to find an undersecretary of health. The VA reported it would find one by May 22.

“Our primary goal is to find the right permanent official for these critical leadership roles, rather than simply fill for expedience,” he said.

Cashour insisted the VA was on track to fill the positions faster than former President Barack Obama did after he took office in 2009. Obama nominated Robert Petzel as VA undersecretary of health in November of that year, and he was appointed in February 2010.

The first permanent undersecretaries of benefits and memorial affairs under Obama were sworn-in June 6, 2011.

On Sept. 1, President Donald Trump nominated Randy Reeves as the VA undersecretary for memorial affairs. The person in that position manages the National Cemetery Administration and the country’s 135 veterans cemeteries.

Reeves – a Navy veteran and executive director of the Mississippi Veterans Affairs Board -- was questioned by the Senate Veterans’ Affairs Committee on Wednesday and he must be confirmed by the full Senate before he can take the position.

Trump nominated Thomas Bowman to the VA’s No. 2 position June 21 and the Senate confirmed him Aug. 3 as the new VA deputy secretary.