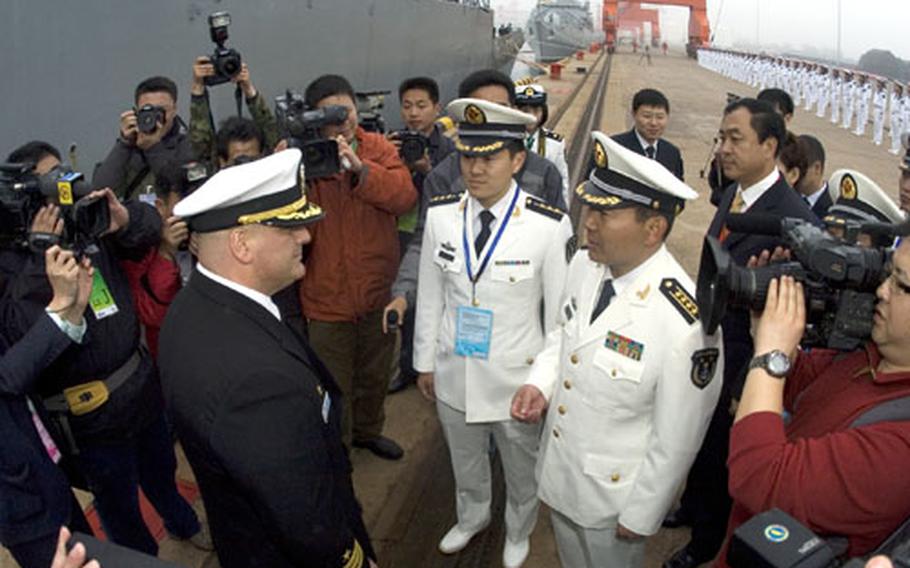 YOKOSUKA, Japan &#8212; The Navy&#8217;s top officer and one of its forward-deployed destroyers arrived in China this week to participate in the International Fleet Review, a 7th Fleet spokesman said Monday.

Fitzgerald sailors &#8220;will engage in professional exchanges&#8221; with the Chinese, participate in sports and meet sailors from all over the world, according to a 7th Fleet news release.

The Fitzgerald, skippered by Cmdr. Richard Dromerhauser, is assigned to Destroyer Squadron 15 and operates as part of the U.S. 7th Fleet, based in Yokosuka, Japan.

The visit comes following an incident in March where five Chinese ships shadowed a U.S. civilian-run ship, which prompted criticism from U.S. leaders. A U.S. destroyer was deployed in response as a preventive measure.

Roughead&#8217;s visit is seen by some Asia research institutions as a step toward preventing future confrontations.

Roughead has previously visited China and has known top Chinese officer Adm. Wu Shengli for the past two years, a Navy spokeswoman told Stars and Stripes earlier this month.

More than 20 nations are expected to send about 40 warships to participate in the fleet review, according to the news release.

The fleet review celebrates the 60th anniversary of China&#8217;s navy since it was formed under communist leader Mao Zedong&#8217;s rule.

The U.S. did not fully recognize Mao&#8217;s government and his armed forces until 1972, when President Richard Nixon traveled to China and reversed decades of policy in support of Taiwan&#8217;s nationalists as the mainland&#8217;s legitimate authority.