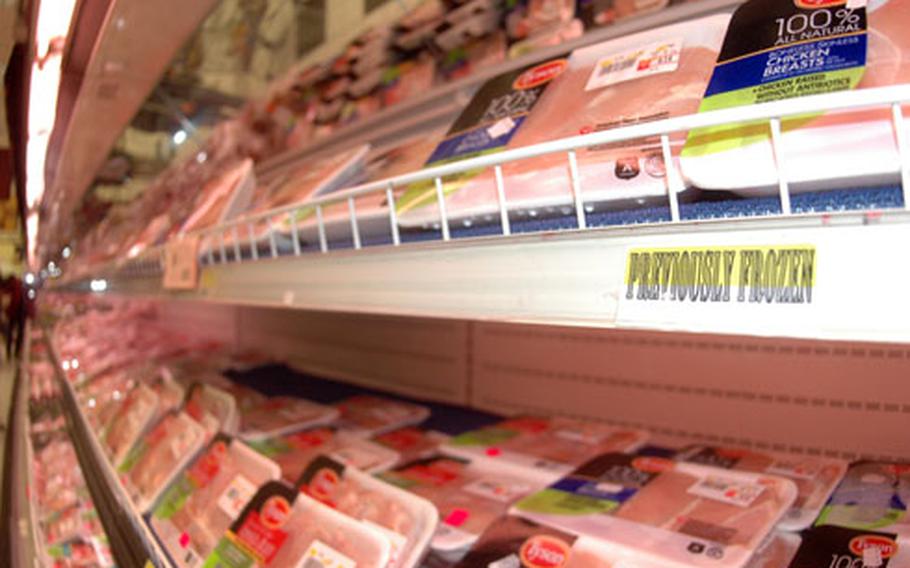 Buy Photo
The commissary at the Navy base in Naples, Italy, stocked its poultry aisle with pre-frozen chicken after officials suspended the contract with Arena Chicken following a failed inspection last month. (Sandra Jontz/Stars and Stripes)

NAPLES, Italy &#8212; Fresh chicken may be off commissary shelves in Italy a little longer than expected.

Arena Chicken, the supplier of fresh poultry products for commissaries in Italy, failed an inspection Oct. 7, and a reinspection scheduled for Nov. 7 has been postponed indefinitely.

Europe Regional Veterinary Command officials met with Arena plant officials Nov. 3 to clarify what the company needed to do prior to the next inspection.

"ERVC officials are awaiting the company&#8217;s action as a result of the Nov. 3 meeting," said Phil Tegtmeier, vet command spokesman.

Following the failed inspection, Arena filed a "corrective action response," which outlines their plan to deal with discrepancies. The proposal "did not fully correct the problems noted in the original audit," Tegtmeier said.

The contract between the Defense Commissary Agency and Arena Chicken was suspended after last month&#8217;s failed inspection, which was caused by a lack of quality control procedures when inspecting slaughtered chicken.

There is no date set for reinspection as ERVC officials said it is up to the company to "request a reaudit" when it is ready.

The October inspection was the second time this year the Arena contract was suspended after a failed inspection. In February, traces of coliform bacteria, which could have indicated sewage or animal waste contamination, were found in the water used to wash chicken parts that have been plucked and gutted.

DeCA officials in Germany said the Arena chicken plant, which has supplied fresh poultry to Italian commissaries since 2002, "has been a reliable and responsive company to work with." Nonetheless, DeCA is looking for alternative sources for fresh poultry.

"There are two other fresh chicken companies we believe to be capable of meeting our poultry needs in Italy, but the processing of approval and contracting is a large and time-consuming task," said Geri Young, spokeswoman for DeCA Europe.

DeCA has also spoken with French suppliers but, Young said, "due to transportation timelines, the most that company could help would be commissaries in northern Italy."

In the meantime, Italian commissaries will make do with increased supplies of frozen chicken.

"We are confident the (Arena) plant is working to correct the deficiency in order to get back on line with the contract as quickly as possible," Young said.