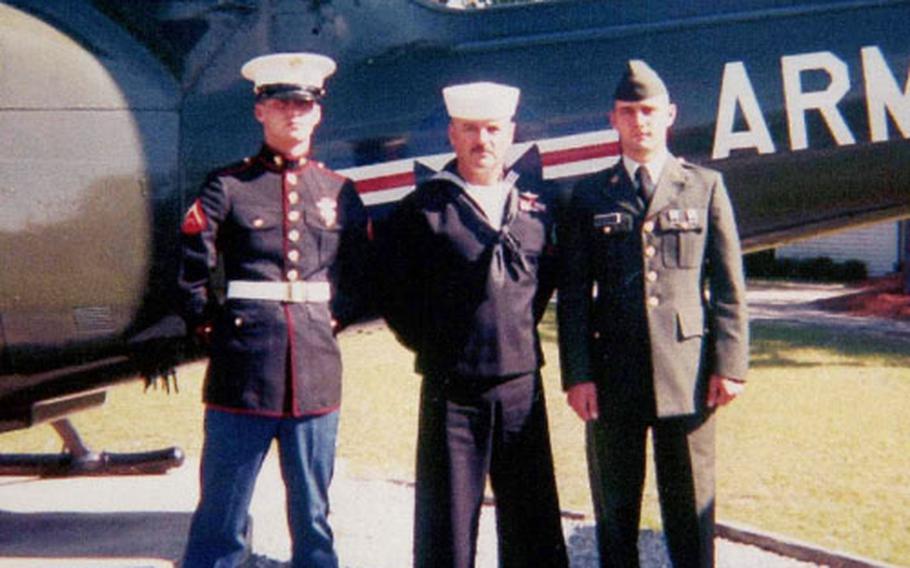 But Uncle Sam has given Petty Officer 2nd Class Mark Kerridan, a Chicago policeman, an opportunity to serve his country again.

For Kerridan, 48, a Navy reservist and a big White Sox fan, it&#8217;s also something of a family affair.

His son, Jason, a Marine lance corporal, is now in the thick of things in the Middle East, and another son, Mark Jr., is an Army private recently mobilized in Illinois.

Kerridan himself was activated last November as part of the continuing war on terrorism. He&#8217;s one of 9,875 Navy reservists ordered to active duty as of Wednesday, according to Pentagon figures posted to the Defense Link Web site.

But when his orders read Misawa, Kerridan had to search for an atlas.

Since January, Jason had been in Kuwait with an artillery unit with the 2nd Marine Division at Camp Shoup, 25 miles from the Iraqi border.

Son Mark is a private who graduated from combat engineer school at Fort Jackson, S.C., Nov. 12. Dad went there for the graduation and proudly stood in uniform with Mark and Jason.

His 853rd Combat Engineer unit has just been mobilized, but Kerridan said his son&#8217;s unit hasn&#8217;t received orders yet.

Kerridan will be in Misawa until September. While his pay scale isn&#8217;t what it would be if he stayed on the force in Chicago, it&#8217;s a sacrifice he accepts.

Kerridan says this is a good time to be in uniform serving the country.