Getting it down on paper. The blossoming of cherry trees in northern Okinawa draws artists as well as photographers. (David Allen / S&S)

Getting it down on paper. The blossoming of cherry trees in northern Okinawa draws artists as well as photographers. (David Allen / S&S) 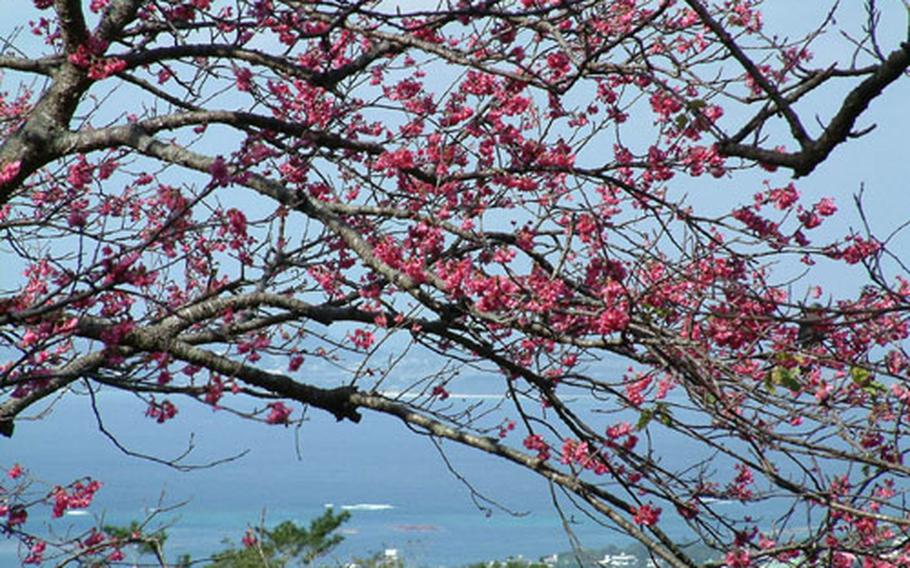 Mount Yaedake in Motobu is awash in cherry blossom pink, with more than 7,000 trees lining the winding 4-kilometer road to mountaintop. It&#8217;s a sure sign warmer weather is on its way.

Months before the cherry blossom party season, called hanami in the mainland, the year&#8217;s first cherry blossoms attract tens of thousands of tourists from throughout Japan.

And unlike the mainland&#8217;s hanami time, where the bright buds last but a few days, Okinawa&#8217;s cherry trees keep their blossoms for weeks. They are a hardy species known as Hikan-sakura and sport blossoms that are a darker pink and a bit smaller than those seen in mainland Japan.

In northern Okinawa, it&#8217;s a time for gatherings of friends for picnics in the park, festivals and slow romantic walks under a canopy of pink.

Last year, more than 230,00 people attended the Mount Yaedake Cherry Blossom Festival, which runs from now until Feb. 11. An equal number attended the annual festival in the nearby city of Nago, where 20,000 cherry trees blanket the hill leading to the ruins of Nago Castle.

The Nago festival will be held Jan. 31 to Feb. 2 and features parades, street dances, the Miss Cherry Blossom pageant, a karaoke contest and dozens of game, food and drink booths.

Cherry blossom time has been a cherished ritual in Japan since the seventh century, revered in poetry, songs and paintings. In mainland Japan, where the trees blossom in late March and early April, it&#8217;s a time of picnicking and partying, where the sake flows freely and everyone&#8217;s considered a friend.

The Okinawa festivals are no different. The advantage here is that the flowers last long enough for a leisurely return to a particularly lush stretch of cherry trees that might have been lost in the haze of last evening&#8217;s revelry.

Sakura, Japanese for cherry tree, means &#8220;blooming&#8221; and is believed to be derived from the name of Princess Kono-han-sakuya-hime. Legend has it she glided down from heaven and landed on a cherry tree.

Another version of the story is that the princess planted Japan&#8217;s first cherry tree on Mount Fuji. The cherry blossom is considered to be the national flower.

The cherry trees on Yaedake in Motobu hail from a more recent era. They were planted between 1963 and 1965 after an American commander of a communication station atop the mountain asked the local mayor if there was anything the U.S. military could contribute to the community.

With the help of the American-Ryukyu Friendship Committee, 1,200 trees were planted along the road winding to the top of the mountain. The U.S. military donated $20,000 for the project.

To attend the Nago Cherry Blossom Festival, take the Okinawa toll road to the Nago exit and travel along Highway 58. Turn right at the sign to the city business district and follow the crowd to the fun.

To attend the Mount Yaedake festival, continue through Nago on Highway 58 and turn left on Highway 84 and follow the signs.