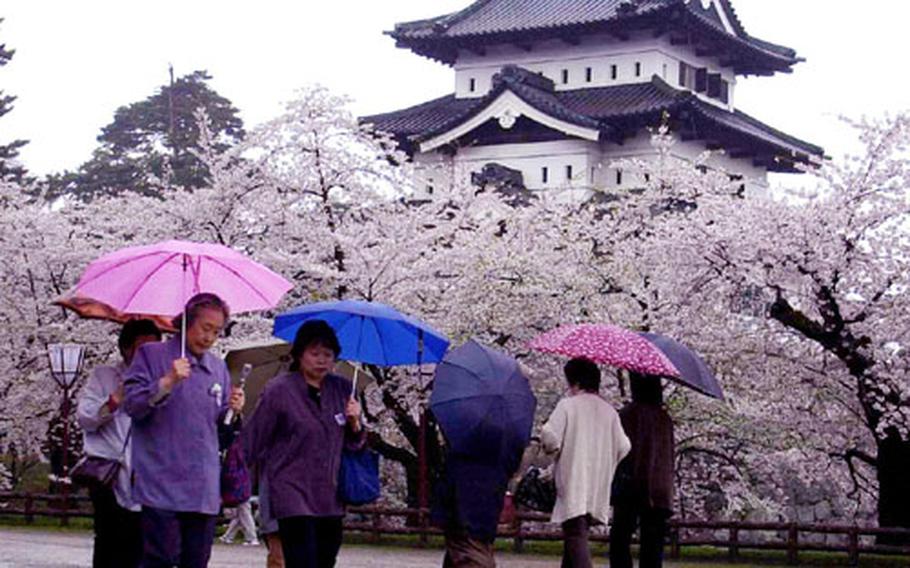 As seen from a portal of Hirosaki Castle, spectators stroll across a bridge spanning the castle moat Saturday in Hirosaki, Japan where 5,000 cherry trees are in full bloom. (Wayne Specht / S&S) Spectators fill a bridge spanning the Hirosaki Castle moat in a previous bloom to catch a glimpse of some of the 5,000 cherry blossom trees in full bloom. Share your pictures with us by emailing tibbetts.meredith@stripes.com. Photographs may be used in print and on the web. By submitting content, you are granting Stars and Stripes a non-exclusive license to use your content in its newspaper, in print or in digital format, or in any other commercial manner of its choosing. You further warrant that you own or control the copyrights to the content (text and/or image) you are submitting and that its republication by Stars and Stripes will not violate the intellectual property rights or privacy/publicity rights of any third party. (Stars and Stripes) 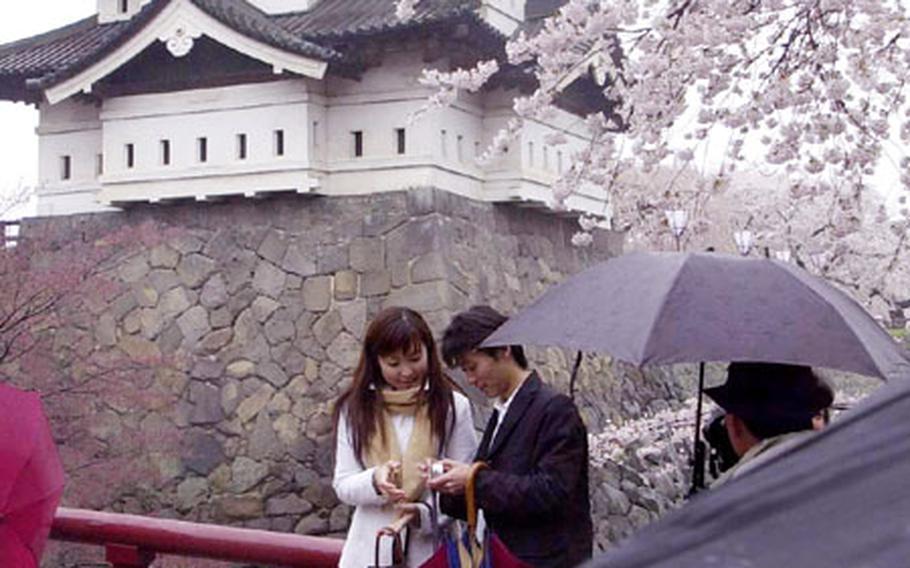 A couple examine a digital camera photo of themselves taken in front of Hirosaki Castle in northern Japan Saturday during the city&#39;s annual cherry blossom festival. (Wayne Specht / S&S)

Despite chilly temperatures and persistent rainfall, thousands of visitors viewed the blossoms, called sakura, growing on the grounds of Hirosaki Castle in the heart of the city.

The original Hirosaki castle was constructed in 1611, and rebuilt in 1810 after it was destroyed by fire. Hirosaki&#8217;s cherry blossom festival lasts until May 4.

&#8220;They&#8217;re very pretty and remind me of how crab-apple trees looked each spring back in Wisconsin,&#8221; Trisha Rieth of Misawa Air Base, Japan, said. It was her first time visiting the castle.

While Rieth and her family drove to the festival, a chartered passenger train brought several hundred Misawa troops and their families from the base 65 miles east of the city.

Each spring, the cherry blossom-blooming front migrates from southernmost Okinawa to Hokkaido in the north, signaling the seasonal rite of spring.

Japan has more than 400 varieties of cherry trees, according to the Japan National Tourism Organization.

The Japanese cherry tree does not yield fruit, leading some observers to reason that since it does not have to produce a market crop, it is a born aristocrat &#8212; its single purpose to be beautiful and nothing more.