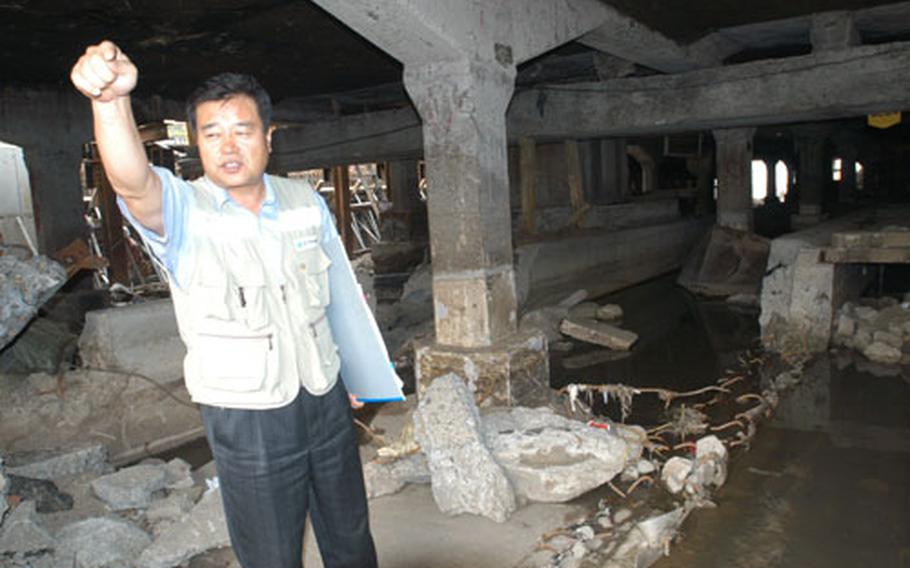 Na Hyung-Gean, director of Seo Yeong Engineering Co. Ltd., stands next to the sewage line that ran underneath Cheongye Street in place of a natural stream. Seoul city is restoring the stream in a massive $313 million construction project designed to increase green space and alleviate a bleak concrete cityscape. (Jeremy Kirk / S&S)

Na Hyung-Gean, director of Seo Yeong Engineering Co. Ltd., stands next to the sewage line that ran underneath Cheongye Street in place of a natural stream. Seoul city is restoring the stream in a massive $313 million construction project designed to increase green space and alleviate a bleak concrete cityscape. (Jeremy Kirk / S&S) 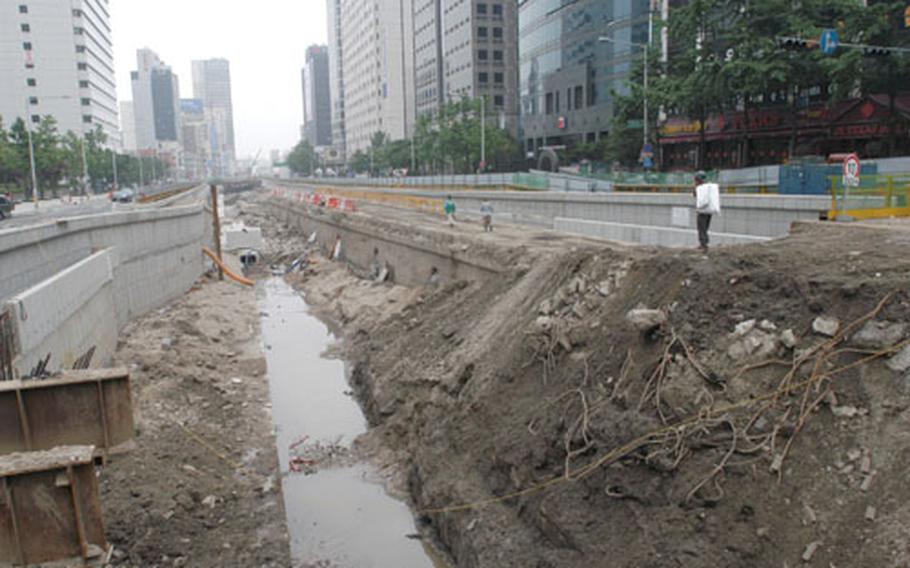 Seoul is restoring a formerly natural flowing stream in a massive $313 million construction project designed to increase green space and alleviate a bleak concrete cityscape along Cheongye Street. The project, scheduled for completion by September 2005, involved razing an ugly, deteriorating elevated highway running through the middle of the city. (Jeremy Kirk / S&S)

SEOUL &#8212; The northern part of South Korea&#8217;s capital could be called the antithesis of urban planning: cramped buildings, narrow nameless streets and an overload of traffic, people and pollution.

In the name of &#8220;progress,&#8221; comfort seemed to become an afterthought as South Korea rose from a poverty-stricken country to the world&#8217;s 13th strongest economic power.

But now, quality of life is the driving Zeitgeist, so much so that Seoul Mayor Lee Mung-bak staked a successful 2002 election campaign on a bid to restore a stream that once flowed through downtown.

The $313 million Cheongye Stream project, which runs behind the U.S. Army&#8217;s Far East District Compound, is the city&#8217;s bet as a linchpin for impressing foreign tourists, reducing congested downtown traffic and revitalizing what had been a bleak concrete cityscape. It&#8217;s set for completion by September 2005.

Other flourishing green projects include the circular grass lawn in front of City Hall that replaced a congested rotary.

And city officials say they want to turn the 630-acre U.S. Army headquarters at Yongsan Garrison &#8212; the real last large tract of green space on the city&#8217;s north side &#8212; into a Seoul-style Central Park when the United States hands it over in 2007.

In the early 20th century, the Cheongye Stream &#8212; fed by fresh natural waters flowing down from Bukhan and Namsan mountains &#8212; ran through the city&#8217;s middle. But it also became a convenient way for Seoul to discharge sewage and garbage, while seasonal flooding made it a festering health hazard.

After the Korean War, the stream was simply covered by tons of concrete. Eventually, an elevated highway was built.

But the sewage water still ran underneath, slowly eroding the masonry and costing the city millions annually to maintain, said Na Hyung-gean, director of Seo Yeong Engineering Co. Ltd., one of the contractors on the projects.

The damage was becoming so severe that the entire elevated highway would have to be closed for two years to repair.

And the eyesore did little to solve Seoul&#8217;s growing traffic congestion, officials said.

Photo renderings of the nearly completed project show a lush, tree-lined stream. At just a block down from Chongno Street, an area with some of the priciest retail real estate in Seoul, Cheongye Road may be poised for incredible growth.

The stream itself, once again exposed, won&#8217;t come from mountains, Na said. Instead, the city will send Han River water through a treatment plant, making it clean enough to drink before pumping it into the culvert.

Closed sewage lines will run underneath the road, along with unconnected storm drains, Na said. The project is flood-proof, able to maintain proper drainage from a 200-year storm.

Drivers aren&#8217;t wanted on the two-lane, one-way streets that will run on either side of the stream, so the city plans to beef up public transportation to head-off traffic.

The knee-deep, slow-moving water, stocked with fish, will eventually drain back into the Han River, Na said. A dirt stream bed will be lined with deeper concrete bedding.

Many of the thousands of business owners along Cheongye Road initially opposed the project, saying years of construction would kill their livelihoods.

To date, no businesses have closed, and the city has regularly met with owners to address their concerns, Kim said.

Ko Tae-chung, owner of a small sports store across from the project, said the city&#8217;s promise of clear air and a better atmosphere remains to be seen. He endures sluggish business.