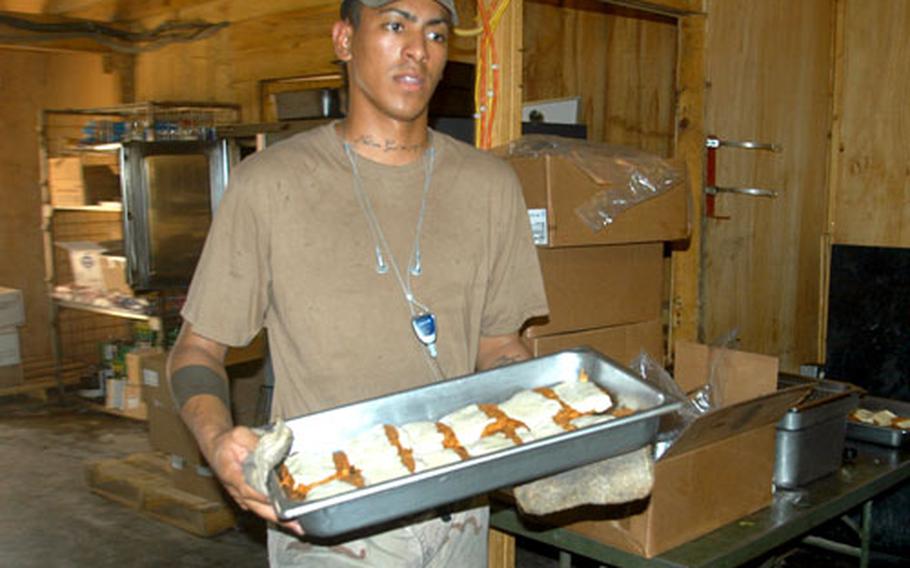 Spc. Robert Dominguez carries a tray of chicken Parmesan from one of the ovens Saturday at Forward Operation Base Lagman near Qalat, Afghanistan. (Jason Chudy / S&S)

Spc. Robert Dominguez carries a tray of chicken Parmesan from one of the ovens Saturday at Forward Operation Base Lagman near Qalat, Afghanistan. (Jason Chudy / S&S) 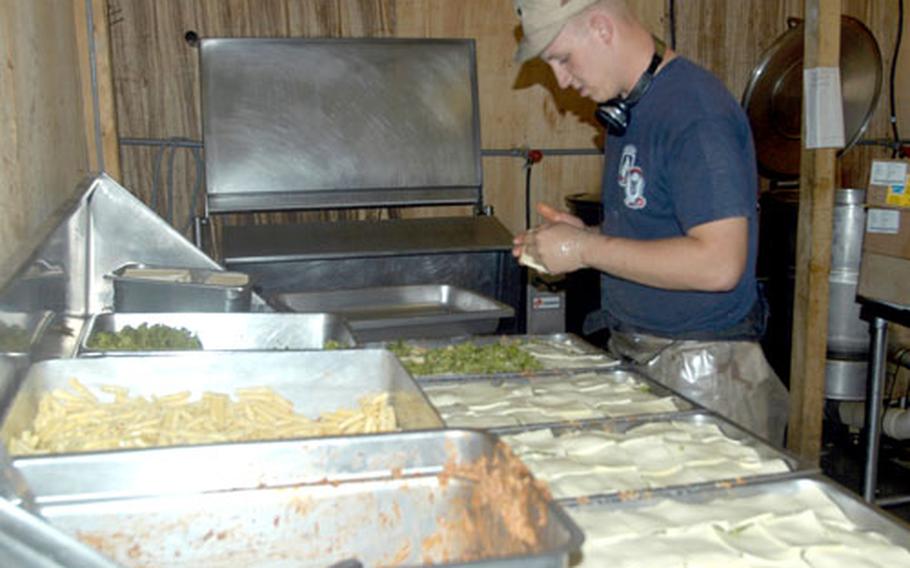 Spc. Nick Krueger lays slices of cheese on pans of baked ziti at Forward Operation Base Lagman. The base has won raves for its dining facilities. (Jason Chudy / S&S)

QALAT, Afghanistan &#8212; A large, wooden building with a cement floor may never qualify as a fine restaurant, but that doesn&#8217;t mean that the food can&#8217;t be really good.

Soldiers running the Forward Operating Base Lagman dining facility have taken standard Army chow, added a few personal touches, and made it, according to some, the best place to eat in southern Afghanistan.

On the surface it wouldn&#8217;t seem difficult to please someone who has been eating Meals, Ready to Eat for an extended period of time. But the cooks say that&#8217;s not the point.

And that caring comes across to the 800 or so soldiers and civilians who eat at the facility. Sgt. John Winden, a mechanic with the Nevada Army National Guard&#8217;s Company D, 113th Aviation Regiment, has eaten at a handful of facilities in southern Afghanistan and said that Qalat&#8217;s dining facility stands out for its food.

The dining facility&#8217;s popularity, Winden said, is especially strong among his unit&#8217;s fuelers.

Henry said that it&#8217;s not the ingredients that make the Qalat dining facility the &#8220;in&#8221; place to eat among the military camps. They get the same food as everyone else. It&#8217;s just lots of little things that, taken together, make Qalat stand out.

He listed everything from receiving top marks for cleanliness and hygiene from preventive medicine inspectors to the fact that their eight Army cooks and handful of Afghan workers come from a variety of cultural backgrounds.

Their baked ziti may not be like that served in a restaurant near their Vicenza, Italy, home base, but then they&#8217;re definitely not in Italy anymore.

Supplies have to be trucked from Kandahar each week. It&#8217;s a few-hour trip along a highway that has seen its share of roadside bombs and land mines.

Henry said that his cooks understand it&#8217;s not just their suppliers that face dangers outside the base. Their fellow soldiers face the same thing &#8212; if not worse &#8212; during their missions.

So, when a unit comes rolling in after normal meal hours, the dining facility&#8217;s soldiers will make sure that they, too, are fed. Henry said this is a fairly regular occurrence.