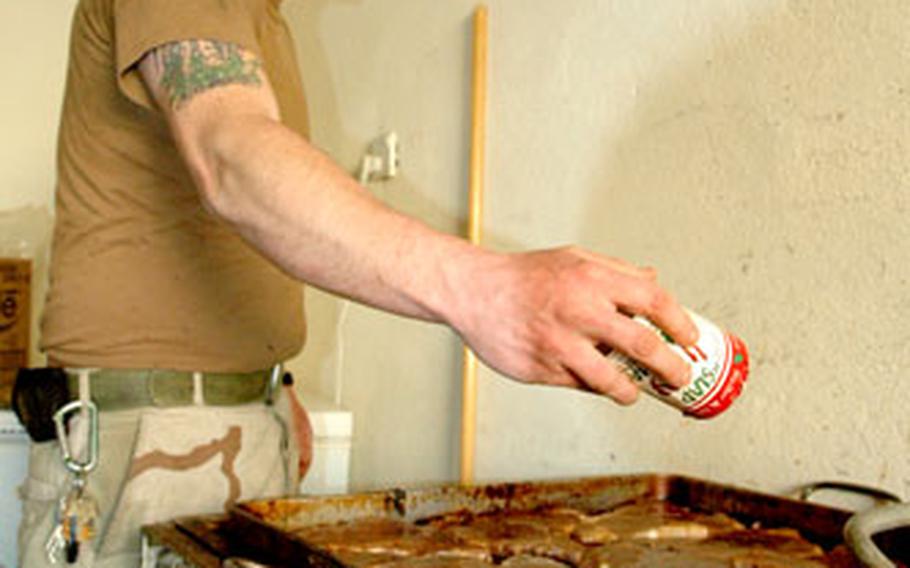 Sgt. James Smith pours seasoning over sizzling steaks at Border Fort 22 in Iraq, beside the international boundary with Syria. As the outpost’s sole chef, he says he gets more appreciation for his work than he would at a forward operating base. (Monte Morin / S&S)

In a small, weather-beaten fort overlooking the Syrian border, 23-year-old James Smith is living his dream of owning a small home-style restaurant.

The only trouble is, his customers eat for free.

Smith &#8212; a sergeant in the 3rd Armored Cavalry Regiment&#8217;s First Squadron &#8212; is the sole chef at Border Fort 22, a stone-and-concrete outpost in northeastern Iraq. For the past two weeks, Smith has served up three squares a day to 35 Tiger Squadron soldiers and Iraqi Border Patrol trainees at the remote location.

As the one man who can stop their stomachs from rumbling, Smith may well be the most popular soldier at Fort 22. His cooking prowess and ability to improvise meals and whip up special requests has even won him renown in outlying camps.

Standing in a cramped, sweltering outbuilding Nov. 28, Smith sprinkled seasoning on a pan of sizzling T-bone steaks and prepared to deep-fry a cache of frozen lobster tails. The cook said he much preferred to work on his own along the border than in a state-of-the-art dining facility in a forward operating base.

Border Fort 22 is just one of a string of rustic outposts that stud the once-lawless frontier. Situated between the Sinjar Mountain Range and a vast prairie to the south, the fort looks like something out of the comic strip &#8220;Croc&#8221; and its world of lost Legionnaires and barren landscapes.

It is actually the second deployment in which Smith has found himself cooking along the border. During the invasion of Iraq in 2003, Smith was a cook in the 101st Airborne Division and prepared meals in Rabiyah, a border crossing further north. He also worked as a cook in Afghanistan.

Working as a cook at Border Fort 22 does have certain benefits. While soldiers and trainees sleep on cots in cramped, unheated corridors inside the fort, Smith sleeps in the back of a spacious transport truck.

When temperatures dip into the 40s, Smith fires up one of the portable burners that are used to heat enormous kettles.

Of course, there are also drawbacks to the job.

On Monday, Smith let out a heavy sigh when a fellow soldier invited him to play football with a group of other men in a dusty lot beside the fort.