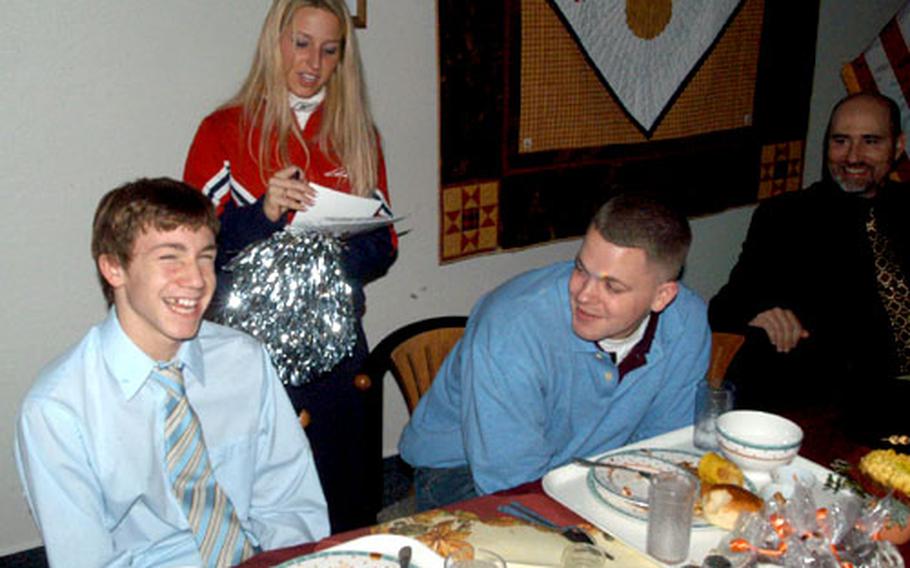 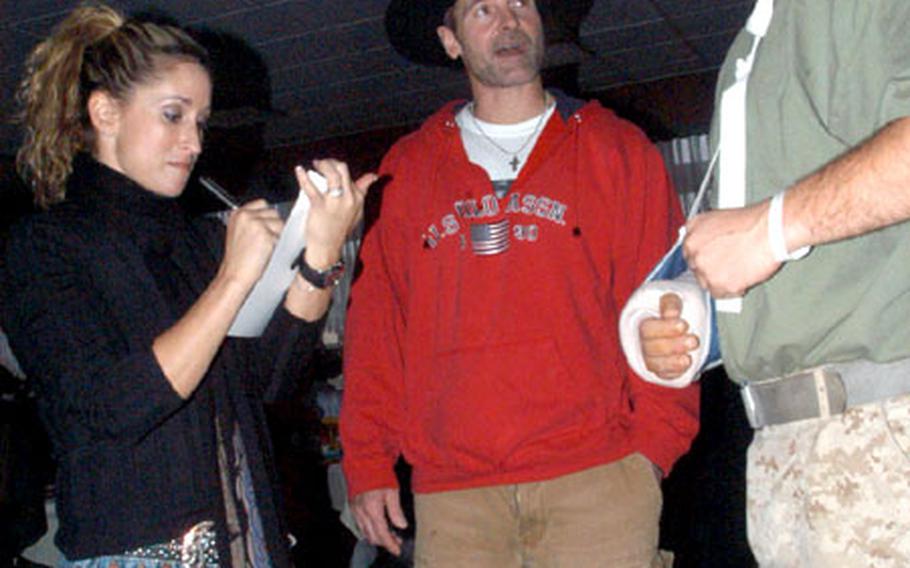 Heidi Newfield, left, and Keith Burns, center, of the band Trick Pony sign autographs for Cpl. Jeff Lovas of Company E, 2nd Squadron, 11th Cavalry Regiment Thursday at Landstuhl Regional Medical Center. Lovas, who was in his second tour in Iraq, was wounded while removing soldiers from his Humvee after it was struck by a roadside bomb on Sunday in Rawra. (Charlie Coon / S&S)

LANDSTUHL, Germany &#8212; Ira Dean walked out of the intensive care room. Inside, a ventilator making deep-sea sucking sounds was keeping a soldier alive.

Playing music and cheering at football games while getting paid and being adored, well, it&#8217;s a pretty good gig. Standing at the bedside of someone burned head to toe puts it in perspective for celebrities who spent part of their Thanksgiving at Landstuhl Regional Medical Center.

Trick Pony, John Popper of the band Blues Traveller, and four members of the New England Patriots cheerleading squad passed through Landstuhl on their way to the war zone &#8212; they weren&#8217;t sure where they were going &#8212; as part of a tour sponsored by the Air Force Reserve Command and U.S. Air Forces in Europe.

They brought greetings from the States. A little touch of home, they said, for guys who&#8217;d otherwise be lying in a hospital bed all by themselves.

Cheerleader Cara Orazietti, from Seymour, Conn., said that after going to a few more bases and the war zone, she anticipated an education.

Cpl. Jeff Lovas of Huntington Beach, Calif., was a new arrival. On Sunday, his Humvee was blasted by a roadside bomb in Rawra. Lovas, the driver, was laying in his bed on Thanksgiving, right arm in a sling, when he spotted a familiar silhouette outside his door.

Burns came in a chatted and posed for pictures. Lovas, who was serving his second tour in Iraq when he was wounded, later made his way to the hospital&#8217;s dining facility for Thanksgiving chow. Earlier, Lovas said he wasn&#8217;t necessarily a fan of the cheerleaders. Now he was saving two seats and had pom-poms on his table. A fan was born.

Popper, leader of one of the U.S.&#8217;s most loved jam bands, is a veteran of USO tours. He said he was amazed that all the patients he visited were most concerned about returning to their units downrange. And Popper was humbled, saying his job was &#8220;silly&#8221; compared with the troops.

Dean, whose band played a concert at Ramstein Air Base on Wednesday, showed awe and appreciation on his face after the trip to ICU. When he jams downrange in a few days, he said, maybe the burned soldier would inspire him to pluck his bass with a special feeling.