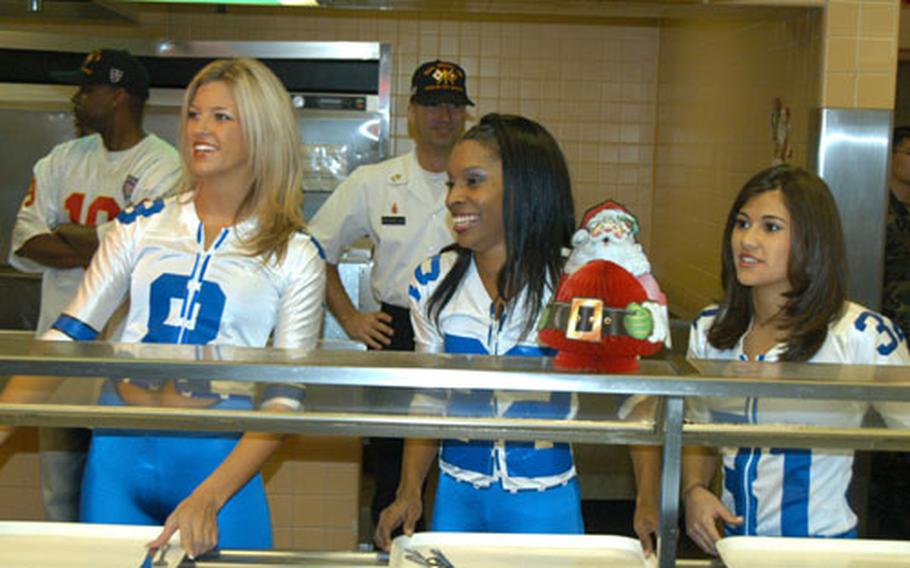 CAMP RED CLOUD, South Korea &#8212; The Dallas Cowboys Cheerleaders did their duty to celebrate the holidays in Area I.

Facility managers had meticulously planned the event, coordinating the movements of the cheerleaders and soldiers to make sure there would be no glitches.

All the planning went out the window when the cheerleaders arrived and joined the chow line dressed in tight-fitting Dallas Cowboys uniforms.

By the time they emerged at the other end there was general chaos as adoring fans surrounded the young women. Soldiers clutched cameras or eagerly offered publicity photographs of the cheerleaders to be autographed.

The cheerleaders chatted with the soldiers as they ate lunch. Cheerleader Emily Kuchar was particularly popular with the KATUSAs &#8212; Korean augmentees to the U.S. Army &#8212; who were keen to be photographed with her.

KATUSA Chun She-wan of Area I Headquarters and Headquarters Company said he had never heard of the cheerleaders before they arrived at the base.

Chun said Kuchar was his favorite cheerleader because of her &#8216;beautiful blue eyes&#8217; and that he would like to date her or one of her friends.

Pfc. Christopher Beck of the 122nd Signal wore a jacket and tie for the occasion.

Beck, who is from Florida but supports the Cowboys, said the visit was a morale boost for soldiers missing their families at Christmas.

The former high school cheerleader said the Cowboys cheerleaders were the best in the world.

More soldiers were waiting when the cheerleaders arrived at LaGuardia where they put on a high energy routine performed to Britney Spears&#8217; latest hit song &#8220;In The Zone.&#8221;

Former Cowboys cheerleader Marnie Pizzitola, who is leading the tour, said she brought the best cheerleaders in the squad. &#8220;It is considered an honor to be chosen for this tour. They have more performance experience and dance ability,&#8221; she said.

One of the most exciting parts of the tour for the cheerleaders is flying to venues on Black Hawk helicopters, she said.

Each night the cheerleaders perform a 1&#189;-hour variety show that includes dancing, cheerleading, a funk routine, a disco medley, and some costume numbers.

Pizzitola said the Christmas Eve and Christmas day shows were the most emotional. &#8220;It is to say: Thank you for serving our country. We appreciate you.&#8221;