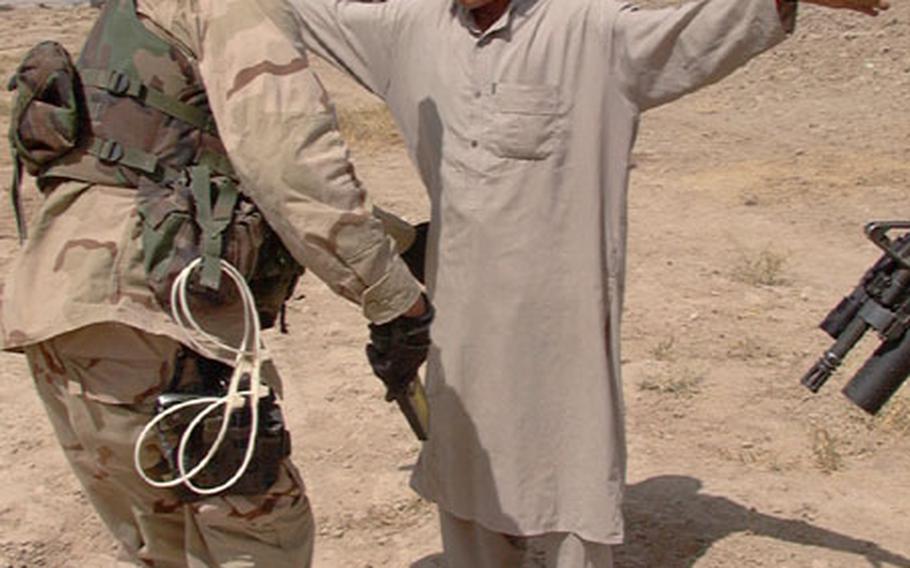 Sgt. Jason Garrison, 10th Military Police Company, checks a young Afghani man at a checkpoint on Friday. In all, the Romanian and American soldiers checked 26 vehicles, each with multiple passengers. (Rick Emert / S&S)

Sgt. Jason Garrison, 10th Military Police Company, checks a young Afghani man at a checkpoint on Friday. In all, the Romanian and American soldiers checked 26 vehicles, each with multiple passengers. (Rick Emert / S&S) 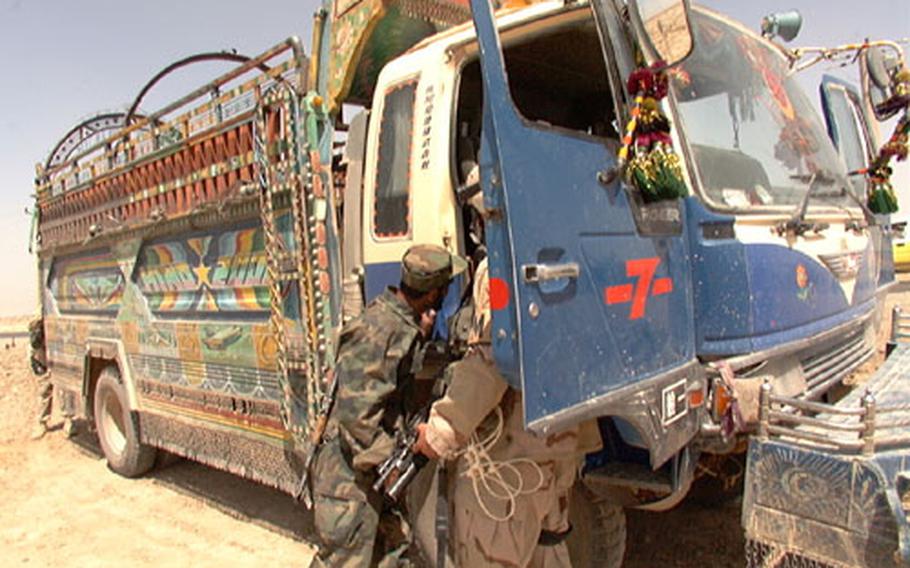 Sgt. Jason Garrison, 10th Military Police Company, and a soldier from the Afghan militia forces inspect the cab of a "jingle truck" at a checkpoint in Kandahar Friday. The trucks have ornate chains dangling from the frame that jingle when they drive, thus the name. Nothing suspicious was found on the truck. (Rick Emert / S&S) 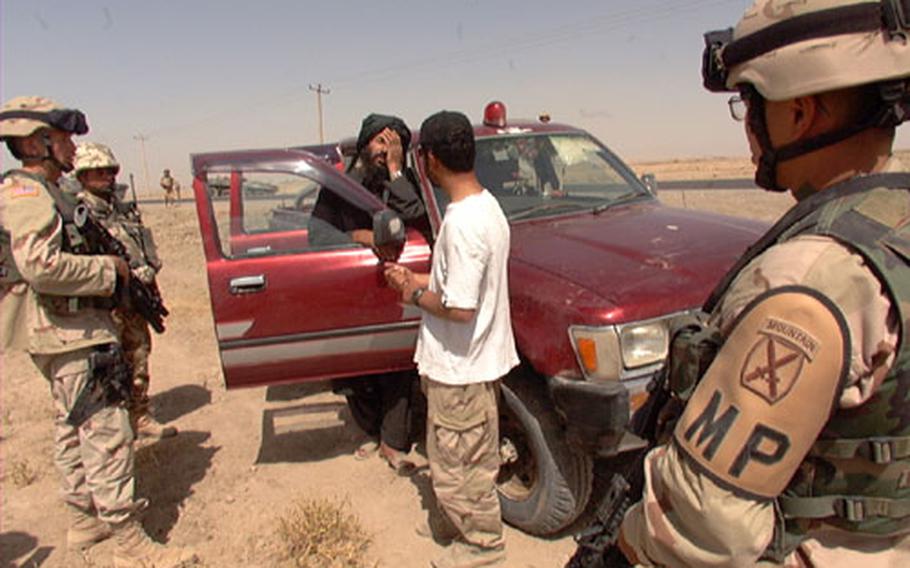 An Afghani tries to explain to military policemen why he was driving a government vehicle and had government papers Friday at a checkpoint manned by Romanian and American soldiers. The soldiers took photos of his identification cards and recorded telephone numbers from his satellite phone. The man’s identification turned out to be legitimate. (Rick Emert / S&S)

KANDAHAR, Afghanistan &#8212; The Afghan civilians appeared overwhelmed by the military presence at a checkpoint in Kandahar on Friday.

Eighteen vehicles and about 50 Romanian and U.S. soldiers were spread across a one-half kilometer stretch of Highway 4. The paved road, a rarity in this dry, dusty region, is a popular thoroughfare for drivers bound for Kandahar city.

In a matter of minutes after selecting the location, the 10th Mountain Division&#8217;s 10th Military Police Company and the Romanian Army&#8217;s 151st Infantry Battalion soldiers were set up and ready to begin.

The three-hour traffic checkpoint was a routine operation, not based on any intelligence or recent incidents, according to 1st Lt. Benjamin Hung, 1st Platoon leader for the 10th MP Company.

&#8220;They are routine, but scheduled randomly,&#8221; Hung said. The randomness prevents potential weapons smugglers from learning the schedule and avoiding the thoroughfare on those days.

Romanian intelligence officers at the site selected the vehicles that would be checked, according to Lt. Filipescu Marian, a ground lieutenant from the 151st.

&#8220;We try to look inside [four-wheel-drive] vehicles that are more likely to make it across mountain terrain.&#8221;

The first vehicle stopped was a pickup truck driven by a man who claimed to work for the governor of Kandahar, although some of his papers listed the previous governor. Hung was in doubt and checked everything from the man&#8217;s identification cards to the phone numbers stored in his satellite phone&#8217;s address book. It turned out the man did in fact work for the government, Hung said.

But as far as Hung was concerned, troops can&#8217;t be too careful.

The MPs and Romanians, along with one Afghan militia forces soldier, thoroughly searched vehicles and the passengers of the vehicles. A female MP searched women in the privacy of a small canvass dressing room that soldiers brought to the site.

The vehicles were searched both for weapons and for improvised explosive devices, Hung said.

Other than a &#8220;jingle truck&#8221; &#8212; so named because the tractor-trailers have ornate chains hanging from their frames that jingle when they drive &#8212; and a few minivans, the soldiers searched mostly taxis and pickup trucks.

Each vehicle, even the smallest of taxi cabs, held anywhere from five to about 15 passengers, from infants to the elderly.

And the MPs searched them all.

The troops didn&#8217;t turn up a single weapon, but that result wasn&#8217;t necessarily discouraging.