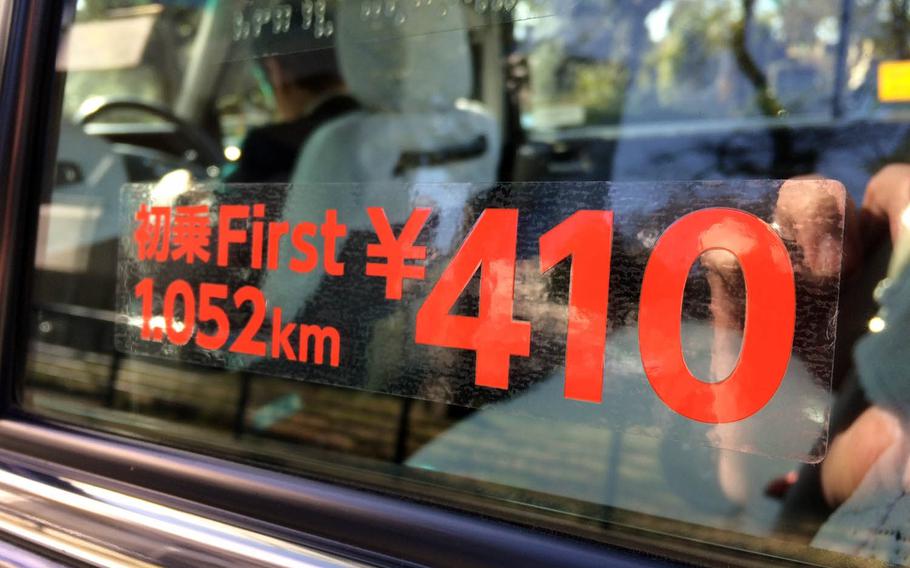 Tokyo's new taxi-fare system lowers the base fare from 730 yen for a 2-kilometer trip to 410 yen for the first 1,052 meters. (Allen Onstott/Stars and Stripes)

Servicemembers in Japan could have a little more yen to spend exploring Tokyo thanks to a new taxi-fare system that took effect recently.

Passengers traveling up to 2 kilometers will pay less than under the previous system, the Ministry of Land, Infrastructure, Transport and Tourism said. However, those traveling farther will see their discount taper off and must pay more for distances of 6.5 kilometers or greater.

“I’ve only taken a taxi on short trips, and I think I’d be more likely to take it now if there’s no train near my destination,” said Timothy Rozier, the dependent of a servicemember at Yokota Air Base in western Tokyo.

However, riders nearby Yokota won’t be affected by the new fare. Areas surrounding the western Tokyo military facility will remain with the old pricing system, as will Kanagawa Prefecture, home to the majority of U.S. bases in the capital region.

“Taxis are very expensive in Tokyo. I’d only take one if it was cold or rainy, just to get to my train station,” said Staff Sgt. Barry Tuck, a crew chief assigned to Yokota’s 730th Air Mobility Squadron. “It’d be 2,000 yen sometimes, plus a 1,280 yen round trip to Fussa Station. It gets pricey fast.”