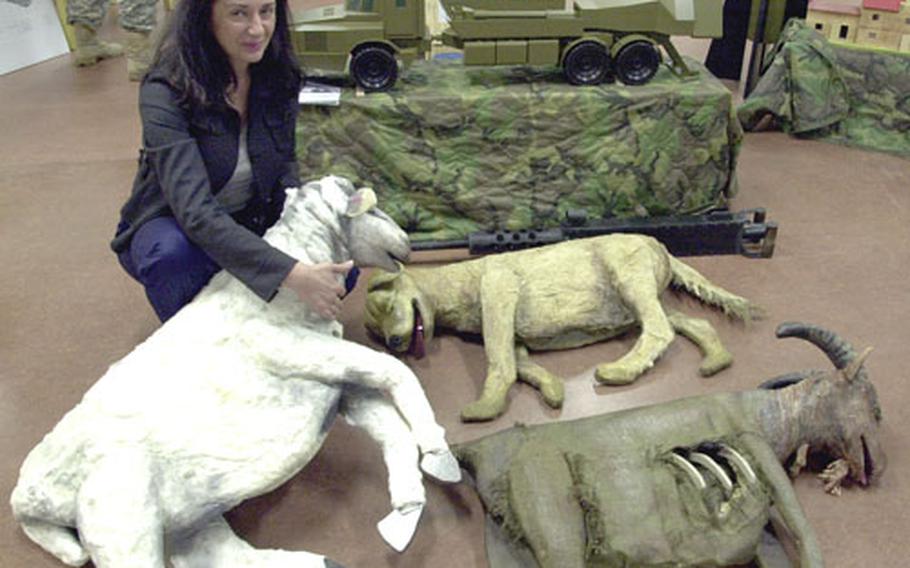 Jasna Vojnovic, a visual information specialist with the General Support Center Rodelheim, shows off models of dead animals that will be used in Germany for training against hidden roadside bombs in Iraq and Afghanistan. (Seth Robson / S&S)

GRAFENW&#214;HR, Germany &#8212; The animals lying on the floor of a building at Camp Aachen on Wednesday were clearly not alive. A dog&#8217;s stomach had been slit open, bones stuck out of the chest of a nearby goat and the lifeless carcass of a sheep lay on the linoleum.

Closer inspection revealed the beasts to be dummies made of painted fabric and foam. They were part of a display of training props made by the General Support Center Roderheim, which was participating in an open house last week at Grafenw&#246;hr&#8217;s Joint Multinational Training Command.

John Krollpfeiffer, chief of the support center, said the animals on display were prototypes, part of a range of objects the center is making to mimic things insurgents use to hide improvised explosive devices in Iraq and Afghanistan.

The dummies will be made of rubber so they will last longer on the range and will cost between 40 and 60 euros (roughly $53 to $79) each, he said.

The center&#8217;s staff also produces a range of models of other objects found on today&#8217;s battlefields, including rubber land mines, plastic handguns and assault rifles.

Their latest creation is a simulated rocket-propelled grenade launcher weighted to feel like the real thing. A metal prototype was on display, but Krollpfeiffer said the center is waiting to see if funding will be available to mass produce it.

The center also makes miniature models of buildings found on training areas in Germany. The office recently built a model of Grafenw&#246;hr&#8217;s new assault building. The roof of the model, which resembles a doll house, comes off so units can look at rooms inside before training on the real thing.

A $39,000 machine operated by the center can &#8220;print&#8221; three-dimensional models using a powder that solidifies, Krollpfeiffer said as he pointed out a range of miniature Army vehicles such as Humvees and tanks made with the 3-D printer. Another machine cuts foam in three dimensions to form terrain models, he added.

Two people checking out what the support center had to offer were 7th Signal Brigade soldiers Capt. John Garceau, 27, of Evergreen, Colo., and Sgt. 1st Class Jason Jewett, 36, of Philadelphia.

The pair were at the open house to find out about the latest training opportunities for their unit, they said.

&#8220;We need to find some new technology that we can use to train our brigade &#8212; what the latest and greatest tools are,&#8221; Garceau said. The 7th Signal Brigade soldiers train at the JMTC at least once a year, he said.

Jewett, an 18-year Army veteran, said today&#8217;s training aids are light years ahead of what was available when he joined.

The pair were particularly interested in getting brigade soldiers access to equipment from Deployable Instrumentation Systems Europe &#8212; or DISE. The gear allows soldiers to shoot one another with nonlethal lasers during training and have their actions recorded by computer simulators, Garceau said.

Soldiers from the 7th Signal Brigade have deployed to Iraq and Afghanistan in recent years. Advances in training will make the unit much better prepared for future deployments, Jewett said.

For example, he said, the Engagement Skills Trainer (a virtual reality combat simulator at Mannheim) has greatly increased the soldiers&#8217; marksmanship.