Chasing the enemy in the Middle of Nowhere 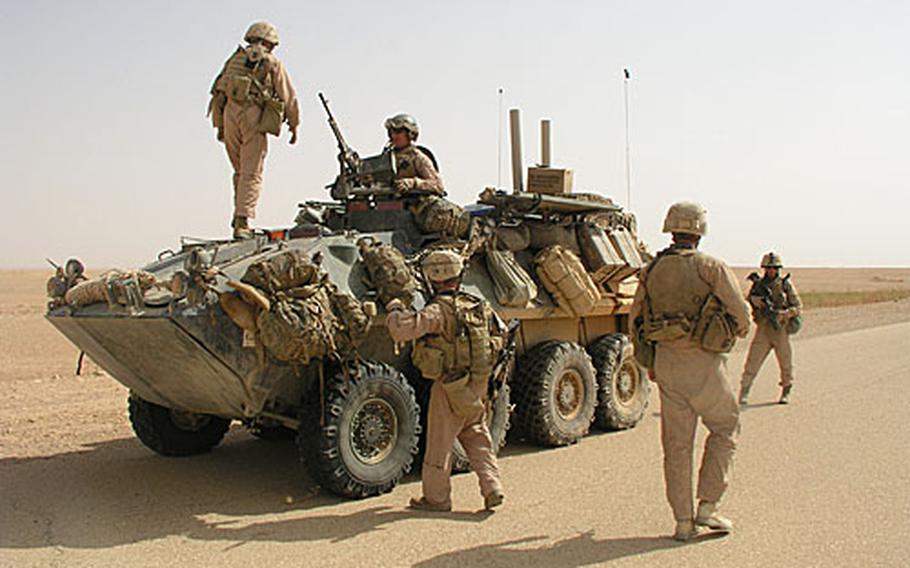 U.S. Marines return to their light armored vehicle after flagging down and searching a white pickup truck during a hunt for insurgents and oil pirates in the desert northeast of Rutbah, Iraq. These Marines are with 3rd Platoon, Company C, 1st Light Armored Reconnaissance Battalion. (Franklin Fisher / S&S)

U.S. Marines return to their light armored vehicle after flagging down and searching a white pickup truck during a hunt for insurgents and oil pirates in the desert northeast of Rutbah, Iraq. These Marines are with 3rd Platoon, Company C, 1st Light Armored Reconnaissance Battalion. (Franklin Fisher / S&S) 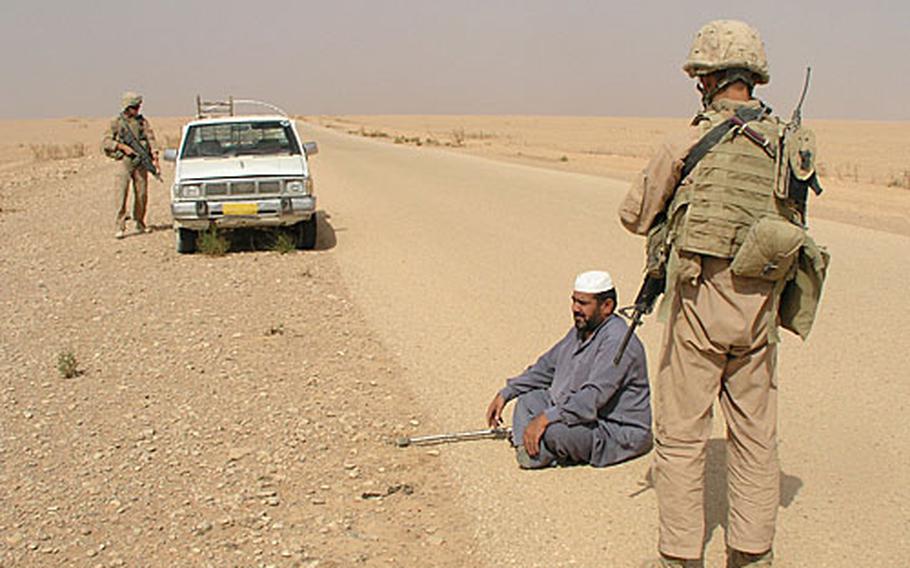 The driver of a white pickup truck sits on the road while U.S. Marines search his vehicle during a hunt for insurgents and oil pirates northeast of Rutbah. (Franklin Fisher / S&S) 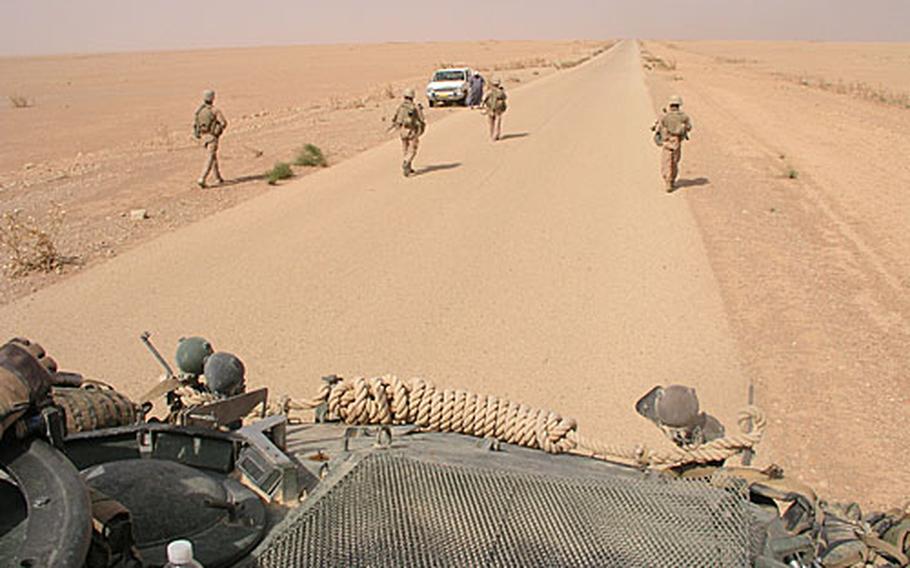 Scouts from a U.S. Marine light armored vehicle approach a white pickup truck they’ve flagged down while taking part in a search for insurgents and oil pirates northeast of Rutbah. (Franklin Fisher / S&S)

Jouncing hell-for-leather through the Iraqi night under the soft glow of a three-quarter moon, Lance Cpl. Nathan Kidd gunned the light armored vehicle relentlessly across the desert of western Anbar province.

The high whine and rumble of its turbo-charged engine heaved and fell and heaved again. The vehicle was filled with Marines from 3rd Platoon, Company C, 1st Light Armored Reconnaissance Battalion.

Many hours later, when the morning sun was high over the desert, the vehicle commander, Sgt. Michael Mills, 29, of Oceanside, Calif., did the math. Mills figured they&#8217;d taken more than 16 hours to go from their Rawah base camp to this stony desert expanse that had all the makings of the Middle of Nowhere.

Now, not unlike state troopers on a roadblock during a manhunt back home, Mills and other LAVs of Company C were set back off a two-lane asphalt road, waiting to stop anyone passing through. They were to search the vehicles to snag insurgents or oil pirates in this remote section of western Anbar province in the vicinity of Hussaniyah.

They set out last Wednesday in a large scouting raid to check intelligence reports that oil pirates might be using the vast, unforgiving terrain as an operating base.

What followed over the next several days highlighted the nature of the Iraq war as it is playing out in western Anbar province: a large ground force trained for set-piece engagements adapting to fighting a shadowy, cat-and-mouse counterinsurgency.

&#8220;Hollis, it&#8217;s time to stare at the desert, buddy,&#8221; one of the Marines called out as he ended his own turn listening to the tactical radio and keeping an eye on the landscape.

Spread wide before them was the desert: flat, stony, only here and there a clump of green scrub brush.

Kidd started the engine and churned toward the highway while Mills waved a red flag slowly a few times to signal the truck. The pickup pulled off the road and stopped.

The scout team dismounted and walked forward, weapons ready, and motioned the driver out. He was a thick-set, swag-bellied man holding a silver crutch and wearing a brimless white cap and a blue, gownlike dishdasha and sandals.

They had him sit on the roadway and some of the scouts guarded him while another searched the vehicle. In the back of the truck were white cases of robust red-orange tomatoes, several pale green watermelons, a ladder and a metal scale.

They asked where he was going to and coming from. He said he was traveling from Rutbah to Ashrah to get water.

Fankhauser photographed the man&#8217;s ID, then walked back to the LAV and told Mills what they had.

Mills radioed for instructions and his platoon commander told him to release the man but to tell him the road ahead was closed.

Throughout the stop, the man gave the Marines an almost friendly compliance. And yet, as he sat on the dust-colored roadway, his face bore a hint of suppressed indignation.

Leaning deep onto his crutch, and saying nothing, he made his way heavily back into the pickup, turned around and drove off.

A new missionThe next day their mission changed and Company C took part in long, hot motorized sweeps. They stopped at a small Bedouin camp, rousing the dogs as their LAVs rolled to a stop. The women and children sat on the ground in one area while the men and boys were questioned in another. The women had the same look as the man in the pickup truck the day before.

The Marines searched the tents, poked through a haystack, and left.

Several vehicles were pulled over. The afternoon was spent in long, dusty explorations of the canyon-like Wadi Haran. Not a soul was seen.