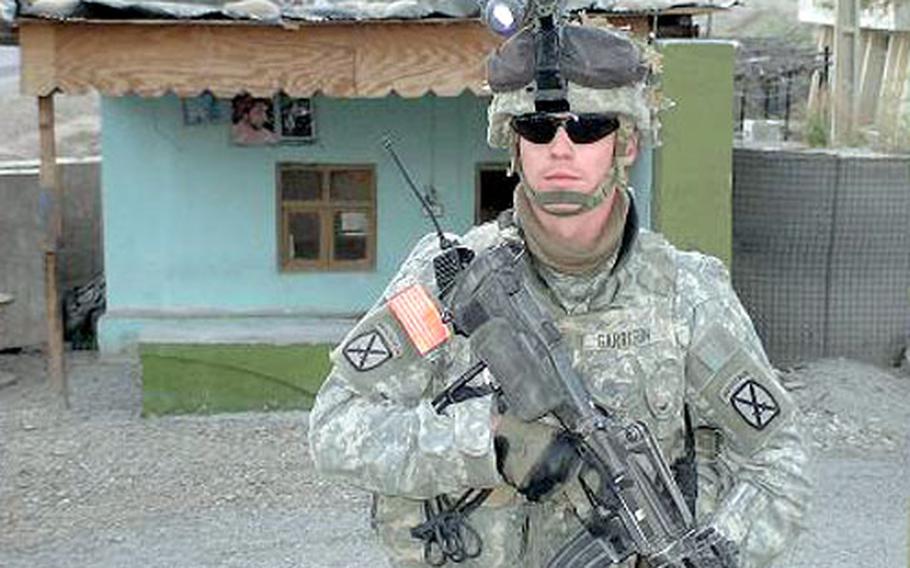 WASHINGTON – A Kansas City military charity has reclaimed a service dog it donated to a veteran after he lied about trying to save a fellow soldier’s life in Afghanistan.

The group Food Industry Serving Heroes took the Boykin Spaniel from Brandon Garrison earlier this month after threatening legal action. A Stars and Stripes investigation in September detailed how Garrison, a former Army specialist hailed as a hero in Kansas, lied for years to Sgt. Christopher Wilson’s mother about being at her son’s side when he died on the battlefield.

“In light of everything we’ve discovered this dog never should have been given to [Garrison],” said Paul Chapa, a founder of the nonprofit group.

In 2007, Wilson was deployed to the Korengal Valley with the 10th Mountain Division and was manning a firebase when he was struck and killed by recoilless rifle fire in a Taliban attack. Garrison, 29, had not held Wilson as he died, despite the story he told the sergeant’s mother, and was instead in the main sleeping tent at the nearby Korengal Outpost, where he spent his deployment inside the wire as a vehicle parts clerk.

Chapa said his group started an effort last fall to reclaim the dog, named Ralfie. Service dogs are costly, and the charity pays about $7,000-$8,000 for each one, he said.

At first, the charity contacted Garrison with a letter stating it wanted to give Ralfie to a more deserving veteran. Then an attorney met with the former soldier earlier this month.

“It took us reaching out to an attorney and the attorney taking the case pro bono … he [Garrison] relented and said, ‘Yeah, come and get the dog,’” Chapa said.

A Marine in California is now in line to become Ralfie’s new owner. He will fly to Kansas City to work with Ralfie before talking him home, Chapa said.

Garrison could not immediately be reached for this story. He told Stars and Stripes in August that the lie about Wilson’s death felt real to him and that the Army should not have sent him to the Korengal Valley because he had emotional issues.

In Kansas, Garrison was known as a combat veteran who walks with a cane and has been diagnosed with post-traumatic stress disorder, traumatic brain injury and other health problems that he claims are related to burn-pit exposure. Along with the service dog, he received a donated home based on his status as an honorably discharged veteran.

He supplied a Department of Veterans Affairs document showing he is rated as 70 percent disabled for anxiety disorder and post-traumatic stress disorder with depression, and he has a 10 percent disability rating for “residuals of traumatic brain injury.”

The Army determined PTSD and a borderline personality disorder made him unfit for duty following his Afghanistan deployment in 2007.

But Garrison’s fellow 10th Mountain Division soldiers, who were outraged by his lie about Wilson, said he was a lackluster soldier who embellished his combat injuries. His supervisor in Korengal Valley called him a “compulsive liar.”