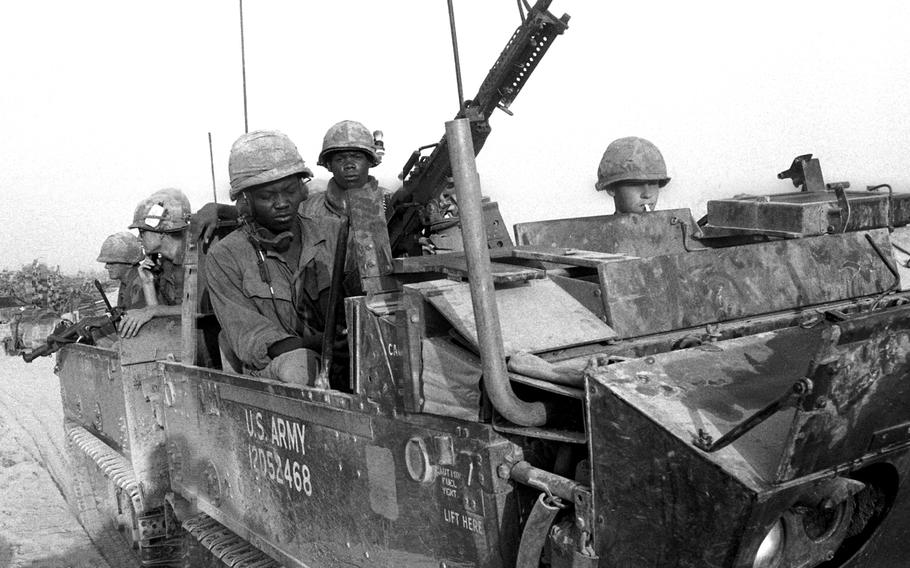 Buy Photo
American troops on the move near the Cambodian border in April, 1969. (David Warsh/Stars and Stripes)

PATROL BASE DIAMOND, Vietnam — The remarkable thing about the battles of Diamond — there have been four of them — is the purity of the brand of war fought on the desolate plain that surrounds the camp.

The battles have been so unrelated to the usual headline-making objectives of the Vietnam war — a city, for instance, or the command of an infiltration route — that they are reminiscent of the days when champions went out to represent whole armies on similar plains. David killed Goliath under similar circumstances, using a primitive sort of artillery. Yet the analogy is difficult to follow.

American commanders have twice since the Communist offensive began Feb. 23 moved a couple hundred soldiers to the edge of the Cambodian border, opposite the area known as the "Angel's Wing." (Because on a map it looks like one.)

According to one high-ranking officer, the reasoning is that the Reds cannot resist a chance to attack their foe on their own doorstep.

For perhaps no better reason than that, the Communists' mouths have watered over the prospect of killing 200 Americans in a single savage charge. At least four, and perhaps six Red battalions have been shattered in the attempts.

The North Vietnamese who have decided to capture the little camp often leave their comfortable bases in Cambodia at dusk and drive through the fragrant dark in trucks to the border.

The American defenders sometimes see the trucks' headlights blinking in the early night. They know then that in a few hours — the time it takes to carefully walk the half-mile or so from the border —- that the quiet, star-lit plain will be lighted by flares instead, made noisy by explosions and populated by shadowy figures of the enemy.

There have been four such attacks on Diamond, or five, if you count a night when artillery killed about 50 Reds before they got off a shot.

Staff officers, more removed from the scene but more familiar with the North Vietnamese way of thinking take a different view. "I don't know," said one, speaking of a similar seemingly pointless attack. "There will be a lot of 'bold emulator' and 'brave destroyer of American' medals out of it. Paradoxically, it may help their morale."

In another respect too, the attacks on Diamond have met with a measure of success. At least 20 GIs have died in the attacks.

Twenty American lives are not many in the context of a war, observers point out, especially in exchange for the more than 500 Communist soldiers who have died around Diamond.

When David defeated Goliath, it was partly because his loins were girded with the truth, according to the Old Testament. If that parallel can be carried forward, the North Vietnamese are no Davids.

A wounded prisoner taken after one of the battles told his American captors the Communist battle plan as he understood it: "We were going to overrun the base, then march to Saigon."