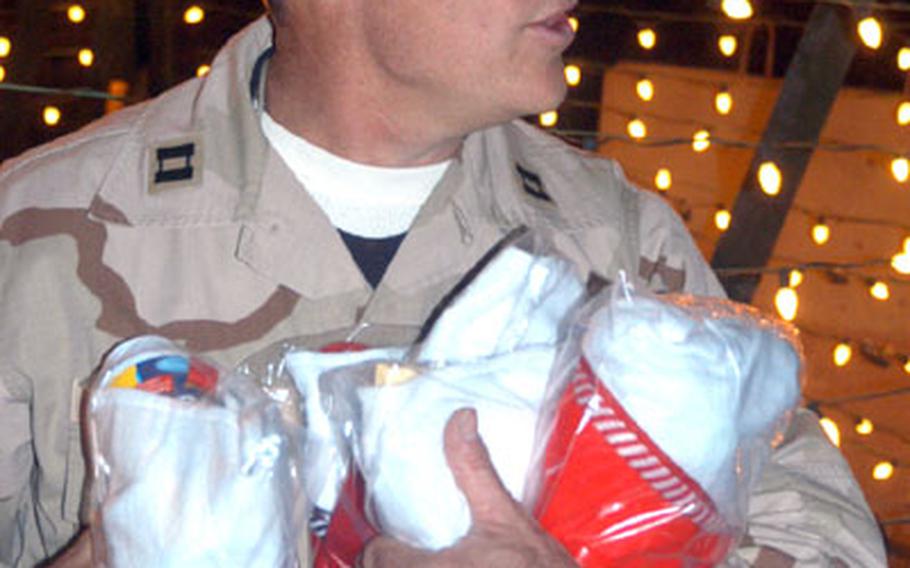 Chaplain (Capt.) Quentin Collins holds Christmas stockings sent to members of the 332nd Air Expeditionary Wing at Balad Air Base, Iraq, during tree-lighting ceremonies recently at the base. Making Christmas special is one of the duties of the Air Force chaplains in Iraq. (Ron Jensen / S&S)

Chaplain (Capt.) Quentin Collins holds Christmas stockings sent to members of the 332nd Air Expeditionary Wing at Balad Air Base, Iraq, during tree-lighting ceremonies recently at the base. Making Christmas special is one of the duties of the Air Force chaplains in Iraq. (Ron Jensen / S&S) BALAD AIR BASE, Iraq &#8212; The 2,500 members of the 332nd Air Expeditionary Wing at Balad Air Base will celebrate Christmas this year.

The chaplains will see to that.

And any airman saddened by thoughts of loved ones far away can find comfort.

The chaplains will take care of that.

Anyone struggling to cope with the dangers of living in a country teeming with death need not do so alone.

He was speaking of ministering to deployed troops, in this case, those in Balad. Five Air Force chaplains are everywhere around the air base &#8212; on the flight line, in the maintenance shops and strolling through the hospital wards.

The ministry is different from the one at home, simpler in some ways and more difficult in others.

&#8220;It&#8217;s more focused because we are only dealing with the troops,&#8221; said Chaplain (Capt.) Efren Adversario. There is no youth ministry to prepare. No family sessions.

But deployed troops have a greater need for a chaplain&#8217;s time.

Chaplain (Maj.) Donnette Boyd, from Eglin Air Force Base, Fla., said airmen at their home base release some of their stress with their families, complaining to a spouse about work or something similar.

Air Force members, with a few exceptions, deploy for four months, not as long as the yearlong stints endured by soldiers, but long enough for fears and worries to set in.

&#8220;They scrutinize their lives with a new set of questions in a place like this,&#8221; said Chaplain (Lt. Col.) Gary Brooks, wing chaplain.

More people may seek one-on-one counseling in a deployed location than back home, the chaplains said.

&#8220;It seems like at first, we dealt more with people&#8217;s fear of death,&#8221; he said, a consequence of moving to Balad. Balad is attached to Logistrics Support Area Anaconda, the base that is attacked more by mortars and rockets than any other in Iraq.

As airmen adjusted to that, they wanted to talk about the stresses of their jobs, he said. Now, they are thinking of back home and missing their families as their deployments near an end.

Because families are absent, the chaplains have more time for the troops.

The visits are informal affairs, simple drop-bys to gauge the morale and the attitude of the wing&#8217;s members. They said it is not uncommon for them to be approached by an airman who has never before talked to a chaplain.

They also make regular visits to forward operating bases where airmen are stationed. When they do this, a chaplain&#8217;s assistant accompanies them.

&#8220;The chaplain&#8217;s assistant carries the weapon and ammunition because a chaplain does not,&#8221; said Brooks, who is stationed at Tinker Air Force Base, Okla.

Brooks said the deployed chaplain&#8217;s assistants have a greater role than back at the home base. There is less administrative work, but more direct support of the chaplain&#8217;s increased efforts.

&#8220;Plus, a chaplain&#8217;s assistant can interact more with the troops at a level a chaplain cannot,&#8221; he said, providing greater insight into the wing.

These chaplains, including Chaplain (Capt.) Martin Adamson, are busy now preparing for Christmas.

Brooks said it was decided early on that they would provide as many familiar holiday touches as possible to ease the holiday separation.

That began two weeks ago with a ceremony to light the &#8220;tallest Christmas tree in Iraq,&#8221; by Brooks&#8217; estimation. Carolers were to stroll around the base. Decorations are everywhere.

Activities will culminate on Christmas Day when the wing will gather and everyone will receive a gift from people back home, many from total strangers. Word of the chaplains&#8217; Operation Christmas Cheer spread throughout the States and gifts have been coming in.

The chaplains haven&#8217;t forgotten others sharing the base with them. Many workers are from places such as the Philippines, India and Nepal.

Operation Useful Surplus will provide them with a Christmas tiding.

Adversario, who is of Filipino heritage, said he saw some of the workers going through trash bins, finding useful items tossed away by Americans heading home.

For weeks now, people have been donating items they don&#8217;t want to pack for the trip home.

Despite the special demands on their time, the chaplains still give sermons, lead Bible studies and hold prayer meetings. Boyd led a class on world religions.

The chaplains spend time with recently wounded troops. When U.S. troops attacked insurgents in Fallujah, the hospital at the base was swamped with wounded.

Adversario, who is the full-time chaplain at the hospital, summoned his colleagues to the wards where they held the hands of wounded soldiers and Marines, prayed with them and reassured them.