Chaplains feeding the flocks at Capodichino 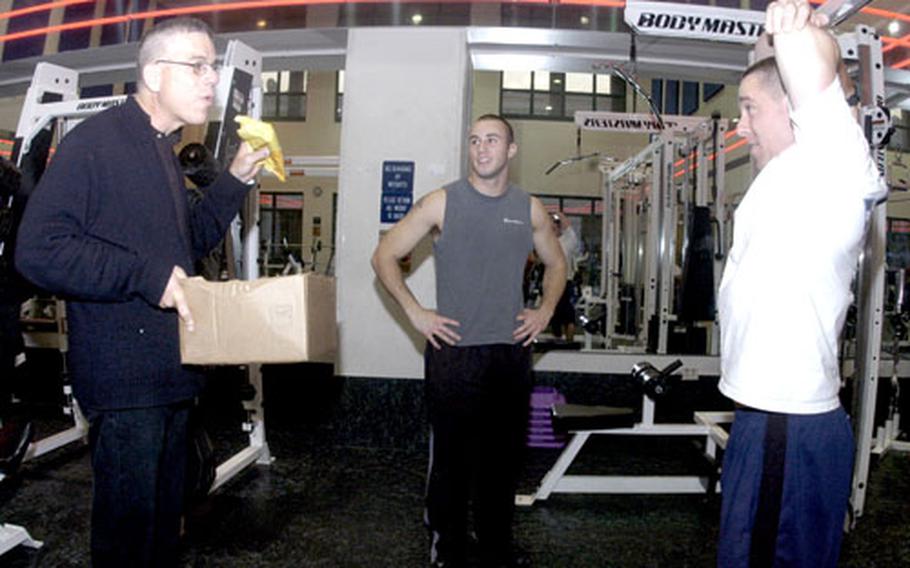 Chaplain (Lt. Cmdr.) Seth Phillips, left, invites a couple of single sailors working out at the base gym to join other single sailors at the Fellowship Hall on Saturday to partake of free fast food and a movie. (Sandra Jontz / S&S)

Like Saturday, when Chaplain (Lt. Cmdr.) Seth Phillips walked around the U.S. Navy base at Capodichino with a cardboard box, using its contents in an attempt to lure sailors to the Fellowship Hall.

Single sailors living in the barracks at Capodichino have limited after-hours entertainment options at the base, especially on weekends, and even fewer if they have no car or choose not to use Naples&#8217; public transportation system to head downtown, Phillips said.

That circumstance, recently coupled with the facts that it&#8217;s the holiday season and new sailors are moving to the base during the Navy&#8217;s second busiest PCS season, prompted the chaplain&#8217;s office to beef up entertainment opportunities for single sailors &#8212; and to give then something they actually wanted, Phillips said.

Like burgers, and tacos, and onion rings, and fries, and pizza, and chips, and soda.

And all for the F-word: Free.

&#8220;We want to have the chaplains be a normal part of sailors&#8217; lives, and not just for crisis or bad news or during worship services,&#8221; Phillips said Saturday afternoon as some 10 to 15 sailors trickled in and out of the Fellowship Hall.

Some wanted only the free food, while others feasted and then stuck around for the free feature presentation, a showing of the comedy movie &#8220;Talladega Nights: The Ballad of Ricky Bobby.&#8221;

Offerings from church services go into the fellowship and outreach program, which in part pays for the single sailors&#8217; free weekend dinners, Phillips said.

On Saturday, after the last shuttle bus that links the two military bases in Naples left, volunteers drove to the food court at the support site base in Gricignano, a roughly 20-minute drive from Capodichino. They bought food from the A&W, Taco Bell and KFC establishments and trucked it back for the single sailors.

With 500 single sailors, Capodichino primarily is the Navy&#8217;s working base in Naples. The base does have a one-screen movie theater that shows free flicks, usually older movies, but very little else.

Gricignano, on the other hand, has the family housing, Navy Exchange, commissary, bowling alley, movie theater, Irish-style pub, and a restaurant.

The Navy provides a limited shuttle service between the bases, but the chaplain&#8217;s office wanted to do more, Phillips said. He said his office will continue its push to offer social events on base for single sailors, though after the new year, occasions will be narrowed to once a month.

For Petty Officer 2nd Class Russ Moldenhauer, there is such a thing as a free, er, dinner.