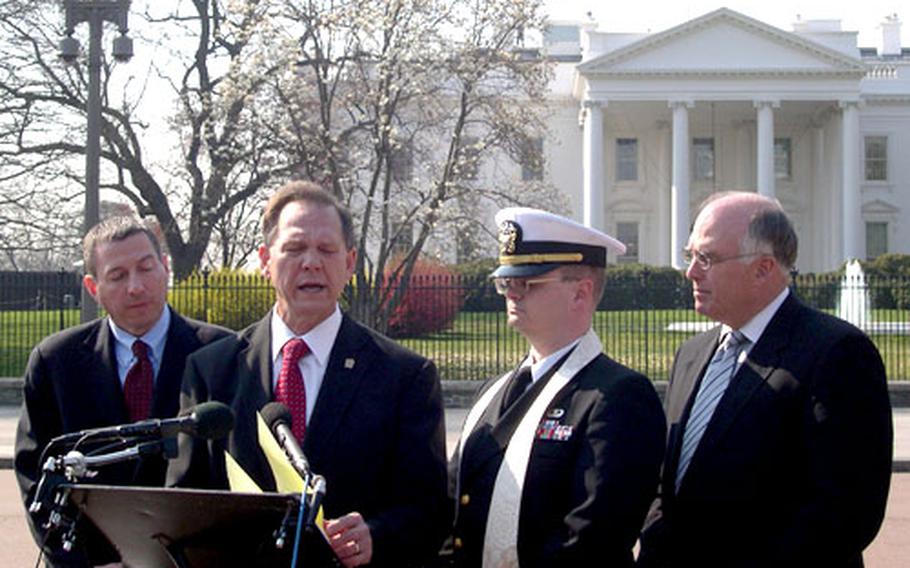 Former Alabama Chief Justice Roy Moore speaks during a protest outside the White House on Thursday morning. With him, from left, are the Rev. Rob Schenck, president of the National Clergy Council; Navy Chaplain Lt. Gordon Klingenschmitt; and Rick Scarborough, president of Vision America. The groups want President Bush to sign an executive order allowing military chaplains to pray “in Jesus’ name” in any military setting. (Leo Shane III / S&S)

WASHINGTON &#8212; The chairman of the largest endorser of military chaplains said he opposes presidential intervention to protect the use of Jesus&#8217; name in public events, despite some Christian chaplains calls for that help.

The Rev. Herman Keizer Jr., a retired Army chaplain and chairman of the National Conference on Ministry to the Armed Forces, said Thursday that the debate over what military chaplains can say in public has been inflated and is misleading. Recent policy statements on the issue offer few real changes to how chaplains conduct themselves.

Navy Chaplain Lt. Gordon Klingenschmitt, who staged an 18-day hunger strike earlier this year over the issue, said the new Navy rules are an illegal action by service officials, because they dictate how he must pray.

He and others gathered to denounce what they call censorship by the services, and to renew their call for presidential intervention.

For months, members of Congress and evangelical Christian religious groups have been petitioning the White House for an executive order allowing chaplains the use of any religious language, particularly prayers specifically naming Jesus, in any military setting.

Earlier this year the Air Force and Navy both updated their religion guidelines to require chaplains to use nonsectarian language when speaking at public events that aren&#8217;t religious in nature, such as change-of-command ceremonies or unit meetings.

Former Alabama Chief Justice Roy Moore, a candidate for governor there and best known for his fight to keep a monument to the Ten Commandments in the state Supreme Court building, joined the protest. He called the rules an &#8220;unlawful order&#8221; and a slap at both the First Amendment and Christianity.

But Keizer, reached by phone, said the new rules don&#8217;t close the door on religion specific language, but instead require chaplains to be considerate of the different faiths and backgrounds of troops present at nonreligious events.

Keizer said the controversy stems from groups of &#8220;aggressive&#8221; Christians and that none of the chaplains his group endorses have expressed problems with the new guidelines. He said the NCMAF represents 5,430 chaplains currently in the services, or more than 70 percent of the existing chaplaincy.

Klingenschmitt said the NCMAF position shows &#8220;a lack of understanding&#8221; about how the new rules are affecting chaplains.

After the event, he said he expects to be reprimanded for appearing at the protest in his uniform, in violation of his commander&#8217;s orders not to wear the service&#8217;s colors while speaking about his personal religious views, and for delivering a prayer that ended &#8220;in Jesus&#8217; name.&#8221;

The Rev. Rob Schenck, president of the National Clergy Council, said he was disappointed to hear about the NCMAF&#8217;s support for the new Navy and Air Force rules.