Chaplain's mission is to restore desecrated British cemetery in Iraq 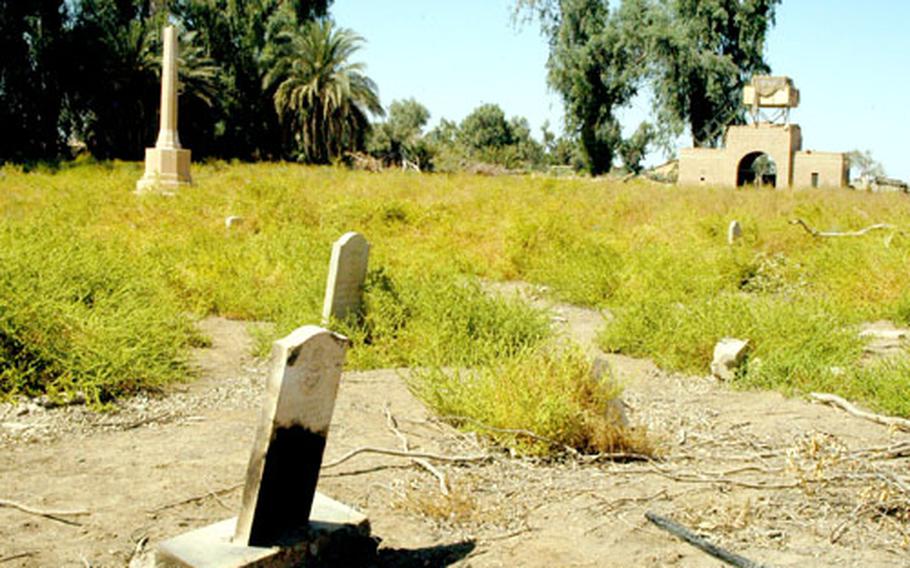 A cemetery for British servicemembers — many who died fighting the Iraqis during World War II — lies in disrepair after having been long abandoned at Camp Habbaniyah, Iraq, a former British base. Old photographs show the large monument to the left of the picture with a cross on top of it and tall trees growing amongst the headstones. (Seth Robson / S&S) The circle on the wall of the church used to be a stained-glass window, which was filled in with bricks. (Seth Robson / S&S) This headstone of a British soldier is one of many that have been ripped up and broken. (Seth Robson / S&S) 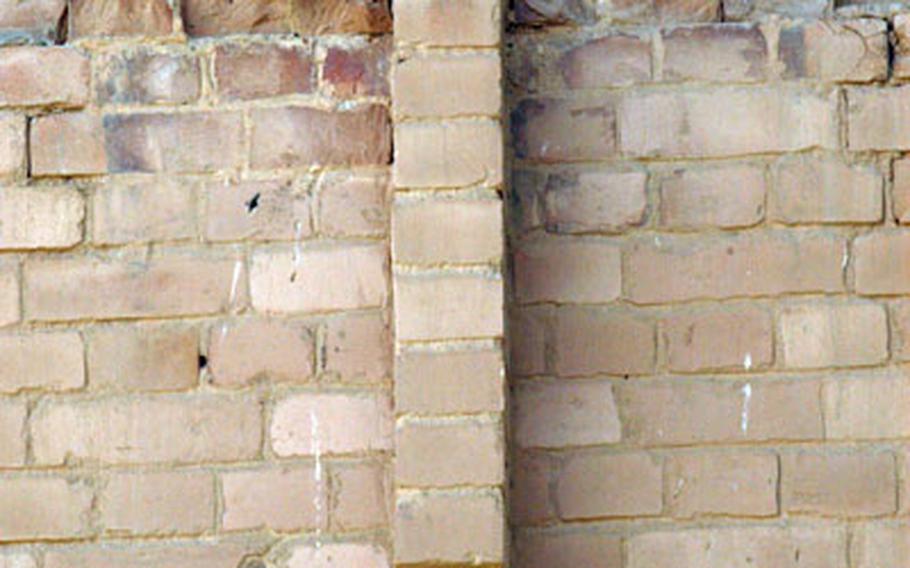 Many of the crosses have been chipped away including this one above an arch at the entrance. (Seth Robson / S&S)

CAMP HABBANIYAH, Iraq &#8212; It&#8217;s unclear when the last Briton visited the cemetery that holds 289 fallen servicemembers and civilians at this former Iraqi air base west of Baghdad. But the state of the graves suggests it was long ago.

It also appears to anyone who visits Camp Habbaniyah &#8212; occupied by the U.S. Army since early last year &#8212; that Iraqis systematically desecrated the graves and defiled a nearby Anglican church.

Now, more than a year after the coalition took control of the base, a soldier from the 1st Battalion, 506th Infantry Regiment are looking to put things right.

Chaplain (Capt.) Randy Robison, 38, of Grand Prairie, Texas, discovered the British graves and their church after arriving at Camp Habbaniyah last month. Robison did some research and quickly found a Web site set up by Britons who had lived at Habbaniyah.

The site says the cemetery holds the bodies of men who died fighting Iraqis who partnered with Germany during World War II. In May 1941, Camp Habbaniyah &#8212; then a Royal Air Force base &#8212; was besieged by Iraqi troops, tanks, artillery and aircraft in an effort to cut off the allies&#8217; flow of oil from the Middle East.

But the outnumbered RAF forces won an unlikely victory at Habbaniyah in what historians have described as the second Battle of Britain. If the British had lost Iraq&#8217;s oil in 1941, at a time when the United States had yet to join the conflict, the course of the war might have changed, according to the Web site.

The Web site says there are 289 graves in the cemetery, with most of those being World War II casualties.

The site even has old pictures showing immaculate grounds full of shady trees and a large monument with a cross standing among the headstones.

The photographs bear scant resemblance to what is there now. The trees have been chopped down and the cross is off the top of the monument.

Crosses on servicemembers&#8217; headstones and on an arch at the cemetery gate have been chipped away, and many other headstones pulled up and broken. A section of the cemetery containing the graves of hundreds more Iraqi Christians who worked with and fought alongside the British has been vandalized even more brutally.

Only a few headstones remain standing and the area has been burned into a blackened wasteland.

It is hard for Robison &#8212; as both a chaplain and a soldier &#8212; to see how the graves have been defaced and not be upset with the people who did it, he said. Seeing the fate of the fallen Britons got him thinking about how the United States treats its own war dead, he said.

Thousands of bodies of U.S. soldiers who died in World War I, World War II and the Korean War are buried on foreign soil. But since the Vietnam War, the U.S. military has tried to bring every one of its fallen heroes home. Operation Full Accounting is charged with recovering the remains of U.S. servicemembers missing in action overseas and has mounted numerous operations to recover remains in Vietnam, Laos and North Korea.

The highest ranking U.S. officer at Camp Habbaniyah, Col. David Clark, commander of 1-506, said he would welcome any British mission to clean up the cemetery.

The damage to the war graves is not the only change attributed to the former Iraqi occupants of Camp Habbaniyah. The street running alongside the cemetery leads directly to what appears to be a large mosque. The building is in the center of a large traffic circle at the junction of two main roads that form a cross where they meet.

Robison said he was amazed to discover photographs of the building that show it was once an Anglican house of worship named St. George&#8217;s Church.

The Southern Baptist minister explored the building and found that the Christian symbols that once adorned it had met the same fate as those at the cemetery.

A large stained-glass window overlooking the chancel &#8212; near the altar of a church, it was where the deacons or sub-deacons stood to assist the officiating priest &#8212; was smashed and the hole filled in with bricks.

A wooden bible stand remains, along with hooks in the vestry where Anglican priests must have hung their robes.

The Muslims added concrete ornamentation to the outside of the church to make it look like a mosque and built a small shed beside it to perform the ablutions demanded by their faith before worship.

In the old photographs, the church is surrounded by a beautiful garden ringed with tall Eucalyptus trees. The trees are still there but the garden died long ago and all that is left is a tangle of weeds and litter.

Robison&#8217;s heart broke when he found the church&#8217;s baptismal font abandoned amongst the weeds.

The lifelong Anglophile has plans to restore the church to its former glory so soldiers can worship there. Most soldiers in Iraq who attend church do so in makeshift chapels, often tents, derelict buildings or plywood shacks. The only facility for worship available for soldiers at Camp Habbaniyah is a large warehouse with a rough concrete floor.

Robison thinks soldiers at Camp Habbaniyah would get a lift if they could worship in the church.