Chaplain reaches out through service in Africa 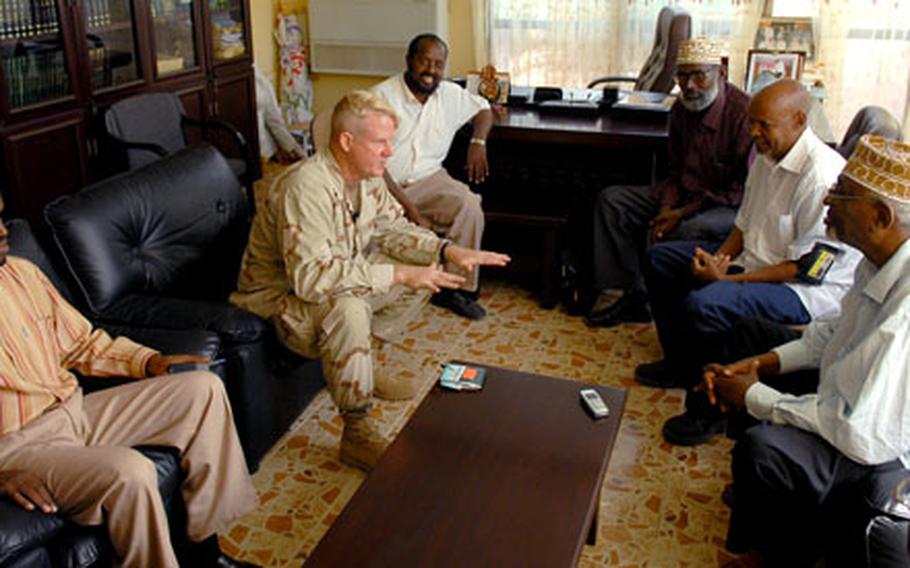 DJIBOUTI CITY, Djibouti &#8212; While studying in Atlanta for his future career as a chaplain, Walter Dinkins found himself in the classroom of civil rights activist Coretta Scott King.

She asked the young serviceman what he intended to do once he graduated.

He told her his plans.

The command chaplain of Combined Joint Task Force&#8211;Horn of Africa has crisscrossed the continent meeting with religious leaders, hoping, as he said, &#8220;to build bridges.&#8221;

&#8220;Religious leaders have the pulse of the communities in Africa,&#8221; Dinkins said.

The task force aims to combat terrorism by use of &#8220;soft power,&#8221; including more diplomacy and economic development.

It has undertaken that by building schools and drilling wells, conducting joint training exercises with local militaries and providing health care and supplies.

Over its 13-nation area of responsibility, CJTF-HOA has conducted several humanitarian missions, including the drilling of 20 wells, flood relief in Ethiopia and recovery efforts in Kenya.

Members of Dinkins&#8217; team attack the mission with equal enthusiasm.

U.S. Air Force Chaplain (Lt. Col.) Lawrence F. Keith said that when they visit leaders of religious communities, including those of faiths other than Christian, they are in the presence of kindred spirits.

Dinkins is the first chaplain of the task force to be based in Africa for a full year, he said.

The 49-year-old native of South Carolina has studied Arabic, helping him to directly communicate with many leaders of the heavily Muslim populations of east Africa.

&#8220;Every Muslim leader wants to make sure we know where they stand, that they are not with the extremists,&#8221; Dinkins said.

Recently, Dinkins met with Djibouti&#8217;s minister of Islamic affairs. The minister, Mogue Dirir Samatar, said he values his time with the chaplain.

The minister said that his country and the United States has begun a friendship and it is people like Dinkins who helped lay the foundation.