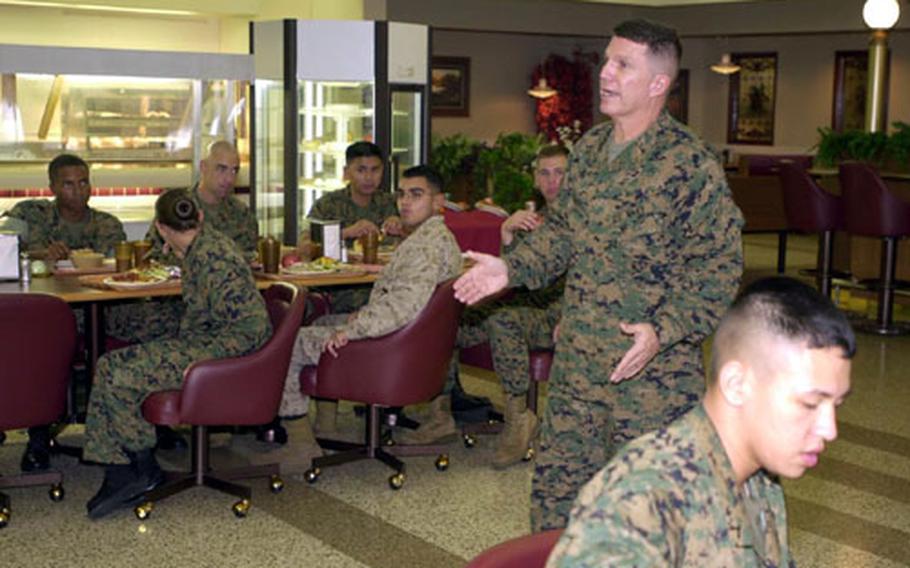 Rear Adm. Robert Burt, the Chaplain of the Marine Corps, talks to Marines during a luncheon at Camp Foster&#39;s Mess Hall Thursday. Burt made his first trip to Okinawa after taking his new post to attend the Chaplain Corps 228th Birthday Ball. (Fred Zimmerman / S&S)

CAMP FOSTER, Okinawa &#8212; Being a chaplain on Okinawa is unlike most chaplain billets in the Marine Corps, the service&#8217;s top chaplain said.

Navy Rear Adm. Robert Burt, chaplain of the Marine Corps, was on Okinawa recently as the keynote speaker at the Chaplain Corps&#8217; 228th birthday ball. He spent time meeting the troops and talking with Marine Corps and Navy leaders.

Burt, who became the Corps&#8217; head chaplain just two months ago, said that during his short stay on Okinawa he was able to hear the concerns from leaders as well as fellow chaplains and religious program specialists.

Burt said a common concern among Okinawa commanders was keeping chaplain billets full. He said the commanders see the chaplains as essential and it&#8217;s important to have them accessible to young Marines and sailors for guidance.

Marine Corps Base Camp Butler chaplain, Navy Capt. William Reed, said Okinawa is one of the best places a chaplain could be.

Reed said Burt&#8217;s visit was a morale booster for Okinawa chaplains and their enlisted support, and appreciated Burt&#8217;s willingness to hear all their concerns.

Burt, a chaplain since 1981, said the Chaplain Corps has changed since he first joined the military in 1970. The role of the chaplain, then, included being a teacher &#8212; including English and spelling. He said they have gotten away from that, but they&#8217;re coming back to it by teaching things such as stress management as well as spirituality.

The Chaplain Corps has come under fire within in recent years, with some chaplains charging that promotions are weighed heavily in favor of those from the major faiths. Several lawsuits have been filed.

Burt said he was aware of the suits, but did not know all of the details.

Burt said that one of the most important roles a chaplain plays is counselor.

Burt said he believes military chaplains are the envy of anyone in a religious profession, and if they aren&#8217;t, they should be.