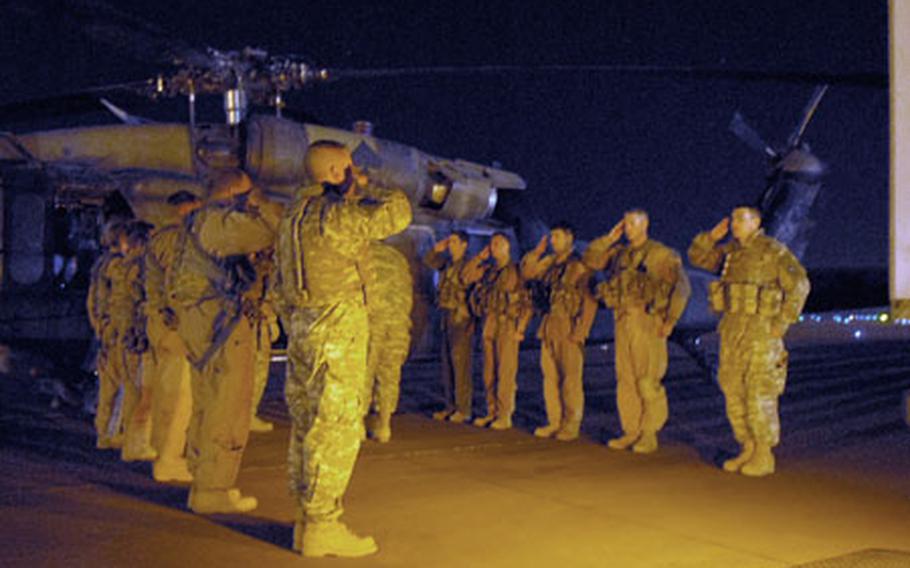 TIKRIT, Iraq &#8212; With a small black cross pinned above the name patch of his uniform, Chaplain (Capt.) Ray Santillano was the only soldier without a weapon on the mission he led last week.

Chaplains are never armed, but Santillano was going to where the fighting was done. His job was dealing with what comes after.

Among the U.S. Army&#8217;s many ceremonies, Santillano performs one of the briefest and simplest, but also among the most powerful. As a chaplain with the 25th Combat Aviation Brigade, he escorts the remains of soldiers killed in northern Iraq on the first leg of their journey home. On landing zones and airstrips he offers a prayer, and then accompanies the body as a reminder to everyone involved that though silent, a soldier is present.

This was the 16th &#8220;hero mission,&#8221; as they are called, that Santillano had embarked on and the details of the various trips have blurred together, he said. Santillano does not count casualties and cannot remember all the names, he said.

It was a cold night when Santillano boarded a Black Hawk helicopter at Camp Speicher, where most of the chaplains of the 25th CAB are based. He was bound for Camp Warhorse, where soldiers had tripped a bomb while searching a house near Baqoubah on Feb. 9.

It was during an earlier trip there that the 38-year-old San Antonio native said he was struck by the meaning of the hero mission. On that occasion, he arrived to escort the remains of three soldiers who had been in a Humvee that had hit a mine. As the bodies were being loaded into a helicopter during a short ceremony, Santillano saw standing in formation a fourth soldier who had also been in the Humvee, but had survived.

The soldier, however, had demanded to be present as his comrades left the base for the final time. Struggling to stay on his feet, the wounded soldier offered a last salute. &#8220;It was the sharpest salute you have ever seen,&#8221; Santillano recalled. &#8220;It&#8217;s humbling to see the kind of sacrifice that these kids make. It&#8217;s humbling to see the loyalty.&#8221;

This most recent night was no different. When Santillano arrived at Warhorse, soldiers had already begun to gather near the landing zone. They lit a path on the gravel with flashlights for the stretchers to be carried to the waiting helicopters.

This time, three members of the Fort Hood, Texas-based 1st Battalion, 12th Cavalry Regiment, 1st Cavalry Division, would be making the trip with Santillano. They were: Staff Sgt. Alan W. Shaw, 31, of Little Rock, Ark.; Staff Sgt. Eric Ross, 26, of Kenduskeag, Maine; and Spc. Leeroy A. Camacho, 28, of Saipan, Mariana Islands. The second door they tried in the building they were searching had been booby-trapped.

Battalion commander Lt. Col. Morris Goins said it was important to have a chaplain there to honor the fallen soldiers, but it also helped those left behind say their farewells.

The ceremony by the helicopters was brief. One by one, the body bags were carried through the salutes of their fellow soldiers. The remains were secured in the Black Hawks. Santillano stood aside as chaplains from Warhorse offered prayers.

It was too dark to see faces, and there was barely any sound. But it was not necessary &#8212; the power of the tribute was evident in the wordless eloquence of a silent airfield, and the perfectly still and unflinching rows of soldiers surrounding their comrades for the last time.

The Black Hawks took off for Balad, where the remains would be transferred to aircraft bound eventually for Dover Air Force base. At Balad, Santillano gathered the crews of the two Black Hawks for a smaller tribute. They offered a salute as the bodies were unloaded from the aircraft.

&#8220;It makes things hit home,&#8221; said Staff Sgt. Joe Zumwalt, 38, of Hawaii, a crew chief on one of the helicopters. &#8220;It makes things really hit home when you are transporting someone&#8217;s remains. It takes away any feeling of invincibility and makes you feel fragile. The soldiers deserve that honor and that care.&#8221;

Back at Camp Speicher, Santillano said that he is often asked about the hero missions. His response is that he cannot control the time and place when they occur, but that he does have control over the respect and dignity with which they are conducted.