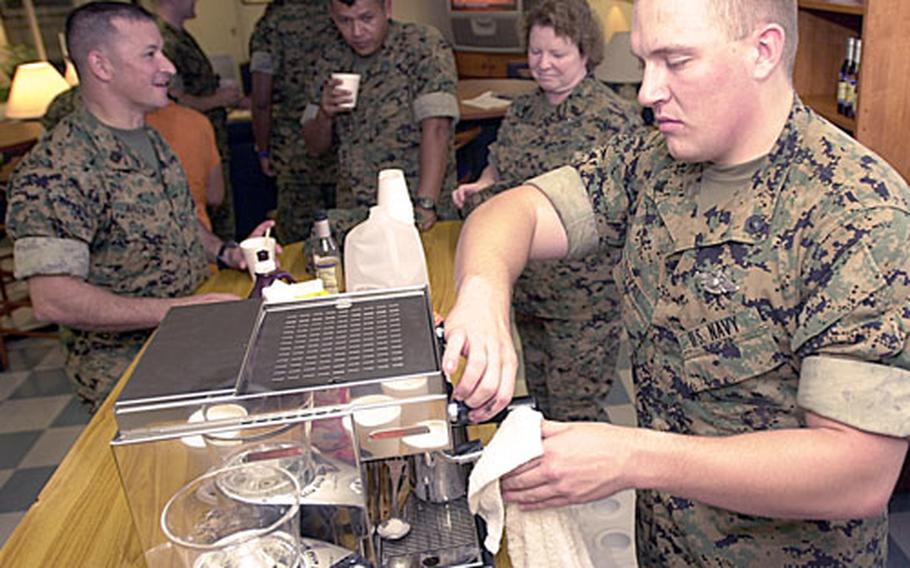 CAMP SCHWAB, Okinawa &#8212; Espresso, cappuccinos and lattes used to be more than an hour&#8217;s drive away for people stationed at Camp Schwab.

But with the opening of Schwabucks coffeehouse Friday, specialty coffee is a lot closer to home.

Previously, the closest place to get specialty coffees was at Camp Courtney, an hour away.

Brig. Gen. Mastin M. Robeson, 3rd Marine Division commanding general, said he sees the coffeehouse as a place for servicemembers to relax in an alcohol-free environment and participate in spirituality and fellowship.

The addition of Schwabucks gives &#8220;servicemembers the option to do something other than go down south and go to the clubs,&#8221; said Col. P.E. Smith, commanding officer for 4th Marine Division and Camp Schwab.

Robeson had seen a similar setup at a camp in Djibouti while visiting operations in the Horn of Africa and wanted to provide the same option here, he said.

So he asked his chaplains to spearhead the project.

But Schwabucks would not have been possible without donations from the American Women&#8217;s Welfare Association and the Marine Corps Thrift Club, said Thames.

Volunteers, including the chaplain and his wife, will staff the coffeehouse.