Changes to Tricare come under fire in Philippines 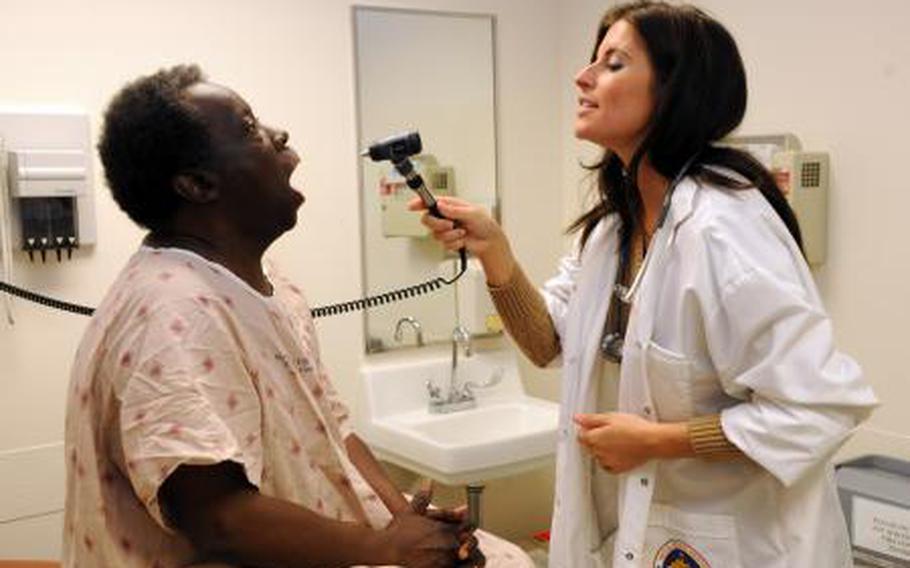 A nurse practitioner conducts a routine physical at a Tricare outpatient clinic in San Diego on March 7, 2011. (Chelsea Blom/DVIDS)

CAMP FOSTER, Okinawa - Military insurer Tricare is getting ready to overhaul its troubled health coverage system for U.S. veterans in the Philippines, but the upcoming changes are already drawing strong criticism from some beneficiaries.

Veterans say a new closed network of Philippine health care providers - set to go online Jan. 1 - is riddled with problems and unanswered questions. They are urging Tricare to quickly pull together a retiree panel to direct improvements.

The agency said Friday it has fully explained the system and denied troubles are looming. It decided in 2011 to try a closed network after struggling for years to reduce fraud and complaints from about 8,000 military beneficiaries in the Philippines who say red tape during claims processing has often blocked them from receiving full reimbursements for covered expenses.

The agency unveiled details of its three-year pilot project during presentations to retirees in Manila, Subic Bay and Angeles City in late October, but the events did little to assuage concerns, said Mike Garcia, director of the Retired Activities Office Manila.

"The people they sent here to present the Tricare project didn't know anything about the Philippines. They think it is just like the U.S.," Garcia said. "I don't think they will be able to put it [the closed network] in place by January because of all the questions and concerns."

The closed network of hospitals and doctors was designed so veterans would no longer have to pay medical bills upfront or file their own reimbursement claims with Tricare, a requirement that has caused confusion over differences between U.S. and Philippine documentation and resentment over rejected or delayed payments. Instead, the providers who have joined the new closed network are supposed to explain benefits to veterans and file claims directly with Tricare so full, upfront payments are no longer necessary.

There are six hospitals and 71 doctors included in the first phase of the pilot project, according to the approved provider list published by Tricare.

The experimental network will be phased in beginning in January to include veterans in Manila, Angeles City, Subic Bay and Orion. The second phase will open in January 2014 in areas of Cavite, while the final phase will include Iloilo City, Tricare has said.

After three years, the agency plans to review the performance and decide whether to adopt it permanently in the Philippines.

"What's going to happen is it's going to fail," said Ken Fournier, a former servicemember who has spent years helping other Philippine retirees with Tricare grievances and pressing the agency for changes to its system. "The issue of travel time is a big one."

Fournier, who has become an unofficial representative of Philippines beneficiaries, said many worry they will be forced to travel long distances to reach participating hospitals and doctors, which could be expensive for those on fixed incomes or those without a vehicle.

For example, the closed network includes just one general hospital in metro Manila, meaning up to four or five hours of travel in some of the world's worst traffic, he said.

Meanwhile, Fournier said many questions remain on issues such as hospital admissions, waivers and the closed-network boundaries. He submitted a list of questions to Tricare management following the Oct. 30 public meeting the agency hosted in Manila.

"If I go to the hospital, who do I go to see to sign in as a Tricare beneficiary?" he said.

Fournier is requesting the agency create a working group made up of representatives from Philippines retired activities offices, veterans groups and online retiree groups that focus on the Tricare issue.

In a written response to Stars and Stripes, Tricare denied veterans will be forced into long commutes or that it has not done enough to educate beneficiaries.

"Travel times have been considered in the recruitment of providers," Tricare spokesman Austin Camacho wrote. "Beneficiaries may choose to drive to see approved providers but because it is locality based, four- to five-hour drive times are not required."

Camacho said the agency sent a letter explaining the closed network to all beneficiaries in the Philippines who have filed a claim in the past two years and also conducted the briefings last month, which were held in areas that used to host large Navy and Air Force bases and still have some of the highest veteran populations. Tricare also has posted online information showing providers, area maps and step-by-step instructions on how to use the network.

The agency will not create an advisory working group of retirees because it already considered veterans' input when developing the network, but the agency's local contractor is planning a new round of meetings with retired activities offices in the coming months to further discuss the pilot project, Camacho said.