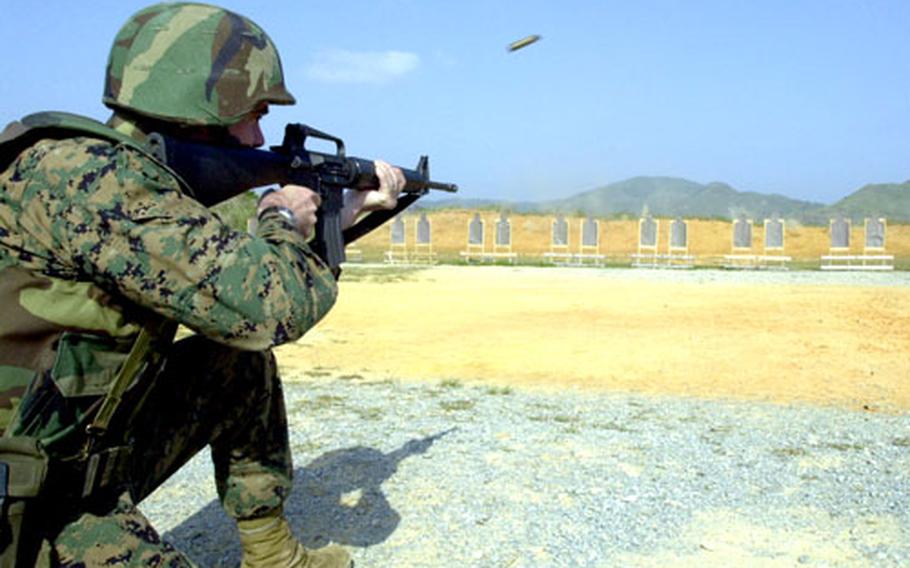 Capt. Ethan Featherly, a KC-130 pilot with Marine Aerial Refueler Transport Squadron 152, fires at multiple targets from 25 yards at one of Camp Hansen’s ranges. This is part of the “Table 2” training of the annual rifle qualification that was implemented in October 2005. If Marines fail the Table 2 portion, their score for the known distance range is dropped and they become marksmen — the lowest qualification the Corps has. (Fred Zimmerman / S&S)

CAMP HANSEN, Okinawa &#8212; It&#8217;s been six months since the Marine Corps implemented new yearly rifle range training standards, and according to a range officer here, the service is right on target.

&#8220;This is the best thing to happen to marksmanship since gunpowder,&#8221; said Chief Warrant Officer Martin Dankanich, the Known Distance Range Officer.

The new standards came about during a 2005 conference of Marine marksmanship experts, including range officers and infantry weapons officers, Dankanich said. The prior way of doing things taught Marines marksmanship fundamentals, but &#8220;we failed to train Marines on rapid response,&#8221; he said. The result of the expert conference: More close quarter combat firing.

Dankanich said around 1993 the scoring went from a possible 250 points using one- through five-point scoring rings to hit-or-miss scoring with 65 points possible. The 1993 change required only a 25 percent score &#8212; down from 76 percent &#8212; to qualify at the lowest category of marksman, he said.

That change didn&#8217;t apply to new recruits and officers in training, who still fired the old course.

Table 2 is what was once referred to as &#8220;field firing&#8221; &#8212; the day after qualification, where Marines would fire at closer range and moving targets. The field firing was required, but no score was kept.

Table 2 now counts, and Marines must hit a certain percentage depending on their distance to keep their Table 1 requalification score, Dankanich said.

The new range also includes Tables 3 and 4, which include more technology. Table 3 soon will be mandatory and includes some portions of the old unknown distance range, low-light firing and firing while wearing a gas mask. Table 4, Dankanich said, is more advanced and is &#8220;infantry specific,&#8221; but will be fired by deploying units.

While the 2005 changes are a great improvement, Dankanich said, training probably will get better after the experts meet again in August.

&#8220;We want to develop an institutional training package that allows the Marines to display the ability while improving,&#8221; he said. &#8220;If we make a couple of changes here and there, we will have a program to last us a century.&#8221;