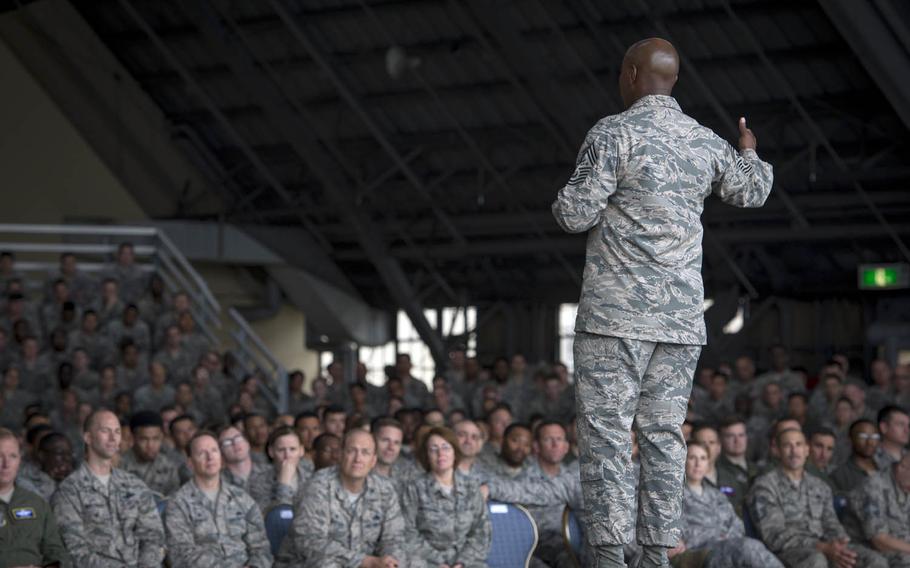 The new “Enlisted Professional Military Education for the 21st Century” policy — announced last week in a servicewide message from Chief Master Sergeant of the Air Force Kaleth Wright — returns emphasis to resident courses that were the focus of PME for decades. It also ends automatic, time-gated enrollment in unpopular online classes that replaced resident courses for most airmen.

“This model [time-gated and automatic enrollment in online classes] was effective for some, but we quickly found it didn’t meet the needs of all airmen, causing many NCOs to lose the opportunity to attend EPME in-residence,” Wright said in the message. “Returning to a rank-based model is a necessary first step to EPME 21, ensuring every airman has the opportunity to attend.”

“It’s a great change. It’s letting airmen put the focus back on the mission and their families instead of spending time worrying about online training,” he said. “The new policy is basically just changing things back to the way they were a few years ago.”

Although an online course will be required as a prerequisite for the Non-Commissioned Officer Academy and Senior NCO Academy courses that airmen take as technical sergeants and senior master sergeants, airmen will no longer be required — or allowed — to take online PME courses too advanced for their grade, Wright explained in his all-Air Force message.

Drabeck, who was automatically enrolled in the Course 15 online class for NCOs while deployed to the United Arab Emirates two years ago, said the website that contained the training didn’t work at the time.

“They enrolled me in a class and told me I had to finish it in a year or I couldn’t reenlist,” he said Monday. “But their own website wouldn’t let me log in, so I couldn’t even start the course.”

The process was so frustrating he decided to worry about it once he got back to his home station two months later, but he said his log-in issues persisted.

“I had to file a trouble ticket and eventually I found a link to PDFs I could study in one of their FAQs,” he said.

The troubles logging in were a problem plaguing many shortly after the program was rolled out, Drabeck said.

Airmen who already completed the NCO or SNCO distance-learning courses but couldn’t attend the academy because of time-in-service gates will receive full EPME credit and don’t have to attend a resident course, Wright’s message said.

Those now enrolled in the NCO or SNCO online courses may finish the class and receive the distance-learning credit, or drop out of the class with no penalty, he said.

As a graduate of the NCO distance-learning class, Drabeck doesn’t have to attend the NCO academy or worry about another course until being selected for master sergeant.

“I’m glad I finished it, but the class could’ve been done a lot better,” he said. “It could’ve been streamlined, and it should’ve worked before they made it mandatory.”