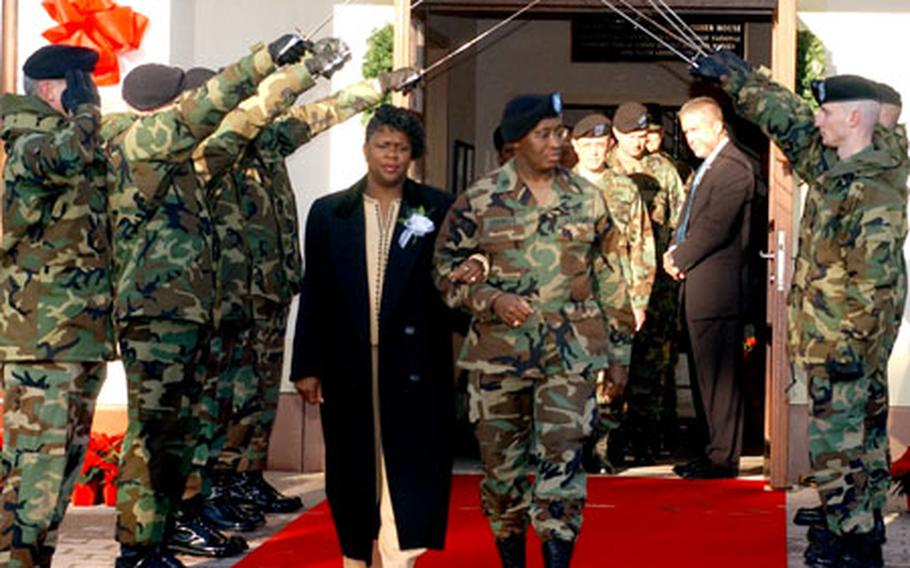 The way they see it, the small high school at this large combat-arms base in west-central Germany has three major challenges:

Units under the umbrella of the Baumholder-based 2nd Brigade may leave for Iraq in early fall, about 15 months after returning from the 1st Armored Division&#8217;s first Iraq deployment.On top of many parents deploying, the high school is facing a $32,000 cut in funds for extracurricular activities including sports.Finally, Department of Defense Dependents Schools officials are transferring longtime principal Dom Calabria under DODDS&#8217; administrators-rotation policy.Calabria&#8217;s departure is a blow coming on the eve of a deployment, say teachers and parents, and questions about Calabria&#8217;s proposed replacement have elevated emotions to crisis level.

DODDS officials announced in January that Brenda Granger would replace Calabria, who is moving to Bamberg High School. Granger was principal at Heidelberg High School until November 2004, when she was reassigned to the Heidelberg district superintendent office staff.

DODDS officials said that Granger was moved because of &#8220;discord between the administration and faculty,&#8221; including allegations of a shoving incident between Granger and unidentified Heidelberg faculty.

Personnel regulations and privacy concerns prohibit DODDS from discussing what happened at Heidelberg, said Frank O&#8217;Gara, spokesman at DODDS headquarters in Wiesbaden. But an internal investigation &#8220;did not substantiate charges of pushing and shoving,&#8221; O&#8217;Gara said.

O&#8217;Gara acknowledged that Granger was reassigned because of &#8220;tensions between the staff and administration ... consternation over managerial styles&#8221; that were distracting from the main focus of education.

Granger did not respond to requests for interviews left at her office, or to e-mails. Calabria declined to comment for this story, saying only that he has a good personal and professional relationship with Granger. Heidelberg teachers who worked with Granger also declined to speak on the record.

In Baumholder, the issues are continuity and transparency, said teachers and parents, with support for Calabria inextricably linked to anxiety about Granger. That anxiety level is increasing because neither DODDS officials nor Granger have met with teachers and parents to discuss her impending arrival or the Heidelberg situation and its aftermath.

&#8220;There needs to be community building here or otherwise we&#8217;re looking at disaster,&#8221; said one teacher, who asked not to be quoted by name, concerned about possible retaliation.

The entire Baumholder faculty signed a petition asking DODDS to allow Calabria to remain through the deployment, but DODDS officials did not acknowledge the petition.

The Baumholder High faculty and Calabria provided an emotional anchor for the community during the 15-month deployment. The first deployment caused &#8220;a state of elevated anxiety every day,&#8221; with so many parents in Iraq, and a number of teachers married to soldiers, said the teacher.

&#8220;We&#8217;re going to be in that situation again, and it&#8217;s critical to have a leader to help the school function as smoothly as possible,&#8221; the source said. &#8220;Experience is critical. Experience with the school population. Experience with teachers who have gone through a deployment.&#8221;

A new principal on the eve of a deployment who has no idea how the community works, or who the kids are, is not a good fit, he said.

Personnel assignments are strictly the prerogative of DODDS officials, O&#8217;Gara said. However, there is still a chance there may be late changes.

However, because Calabria already has exercised his one-year extension after reaching his six-year limit at Baumholder, he will leave, O&#8217;Gara said.