Change will allow airmen to apply for jobs they want, get a quick answer 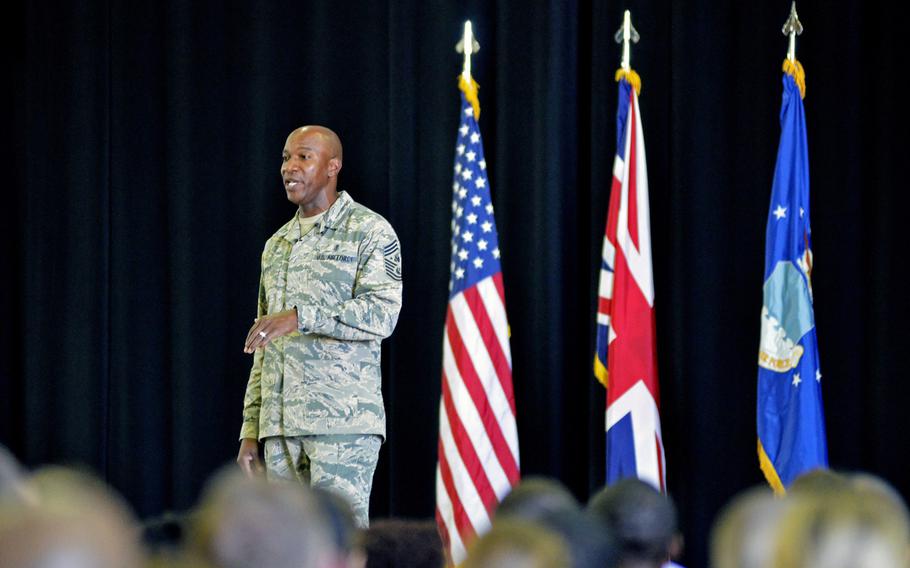 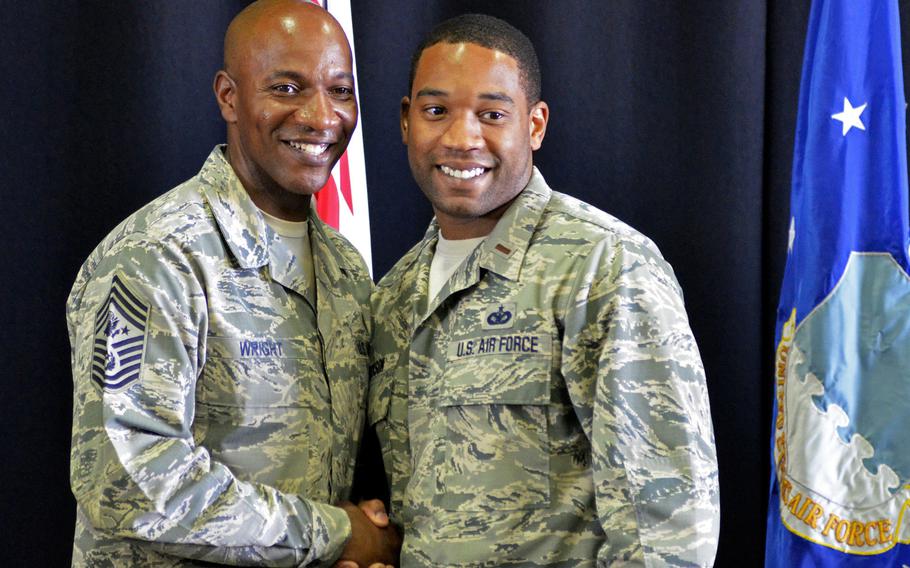 Buy Photo
Chief Master Sergeant of the Air Force Chief Kaleth O. Wright poses for a photograph with an officer after a town hall at RAF Lakenheath, England, Wednesday, Aug. 1, 2018. More than 1000 airmen gathered to hear about coming policy changes to improve their quality of life. (William Howard/Stars and Stripes) 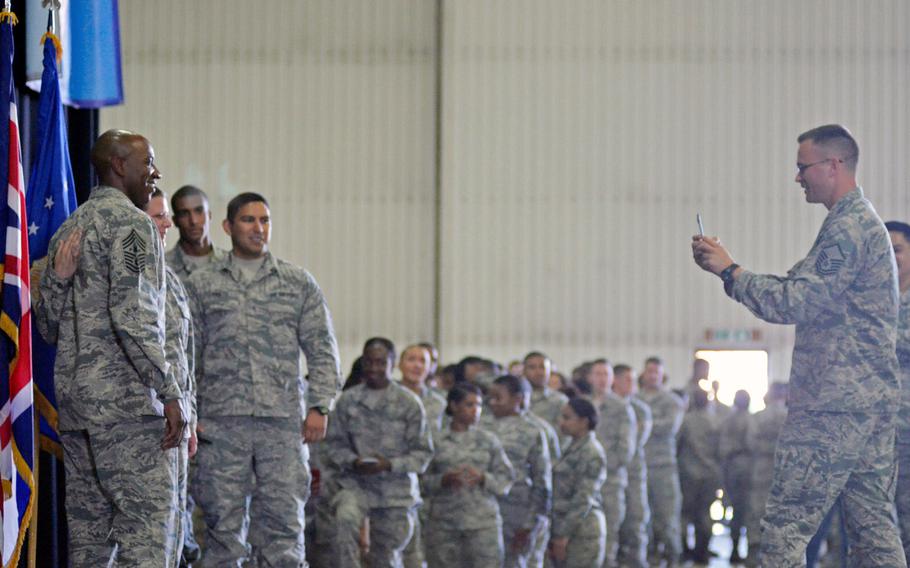 Buy Photo
Airmen line the wall of a hangar for photographs with Chief Master Sergeant of the Air Force Chief Kaleth O. Wright, after a townhall at RAF Lakenheath, England, Wednesday, August 1, 2018. (William Howard/Stars and Stripes)

RAF LAKENHEATH, England — Airmen will soon be able to apply for duty stations based on rank and occupation rather than relying on an assignment wish list, the Air Force’s enlisted chief told airmen at a town hall meeting Wednesday.

The move is just one of several improvements under development, said Chief Master Sergeant of the Air Force Chief Kaleth O. Wright, speaking before 1,000 airmen gathered in a hangar.

Other changes would include assigning support staff directly to units – rather than clustering them elsewhere on base – and encouraging staff sergeants to remain in service longer.

“All of these are things that we’re working towards to just try and make life better for you, to allow you space to take care of yourselves, to take care of each other, be good wingmen and spend time with your families,” Wright, whose popularity has led airmen on social media to nickname him “Enlisted Jesus,” told the crowd.

The change in how duty station assignments are made will simplify career paths for airmen, Wright said.

“You get to apply and within a couple weeks you’ll find out if you got it or you didn’t,” he said. “I think that makes a little bit more sense.”

“They’ll do (physical training) with you and they’ll come out to the line and turn some wrenches with you — all in effort to help our airmen become more resilient,” Wright said.

“We are attempting to increase higher tenure for staff sergeants from 15 to 20 years,” Wright said. “One thing we want to make sure is that as we extend, more staff sergeants stay in the Air Force and it doesn’t create less opportunities for promotions of our senior airmen.”

Wright also mentioned the following actions in the works:

• Joint-custody assignments may be available soon, allowing parents who aren’t married to work at the same base and co-parent.

• A new bereavement leave policy would offer nonchargeable leave for airmen who have suffered the loss of an immediate family member.

Any changes to policy will be subject to review by the Air Force chief of staff and the Pentagon.

Wright managed to mix in fun with the facts. He drew laughter when answering a question from an airman about the why the Air Force’s formal uniform “looks lame.”

He shared an anecdote about a ceremony in Arlington, Va., where he took a picture with his military counterparts in dress uniform.

“I was like, the Coast Guard guy looks more military than me, man,” Wright said.

He said that once the Army’s operational camouflage pattern is adopted in the Air Force, changes to the female uniform are next and then dress blues, based on feedback from airmen.

Wright elicited laughter again when questioned about the possibility of making it easier for airmen to decipher the service’s alphabet soup.

“Has there been a discussion about having one standard acronym or abbreviation list for the entire force?” one airman asked.

Wright took a moment to think and replied, “No,” inspiring more clapping and laughter.

He added: “I do think it’s important for us to be standardized and not wasting people’s time. It’s just something that hasn’t been on my radar, but I promise to look at it.”

Another airman asked about limiting the number of awards listed for boards and promotion packets. The Air Force currently has 750 different awards that Wright said should be further reduced, but he also said he believes an individual’s achievements should be always be documented on a performance report.

After the town hall meeting ended, airmen formed a line stretching the length of the hangar for photos with Wright.