Change is on the air at Misawa's EDGE Radio 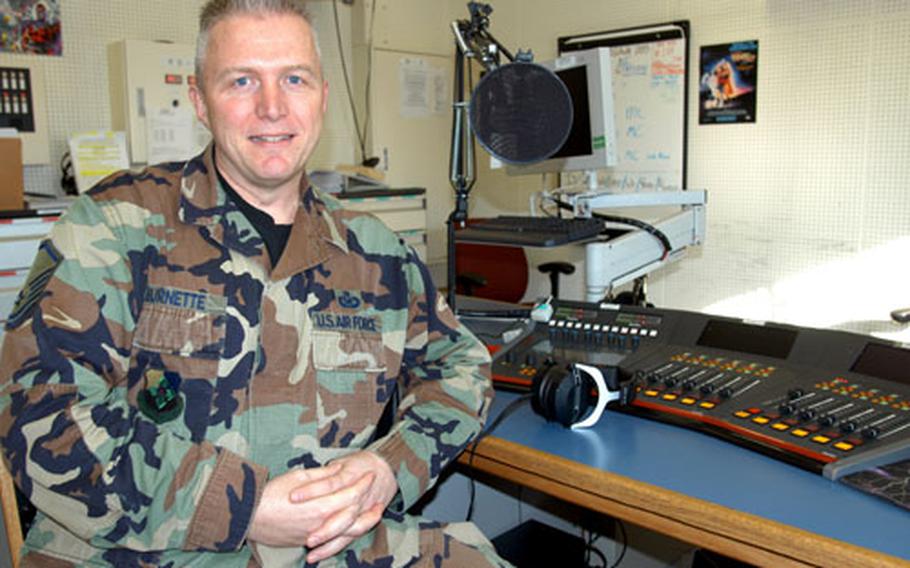 MISAWA AIR BASE, Japan &#8212; It may sound like a radio station without an identity, playing Christina Aguilera, Boston, Kenny Chesney and the Black Crowes.

In the five months that Burnette has been at AFN Misawa, he&#8217;s introduced a new, eclectic music lineup for EDGE Radio 1575 AM.

Gone are the two straight hours of country music, the 120 minutes of hip-hop and rap each day. In fact, no genre gets played for that long continuously anymore. Instead, top tunes from an array of music charts &#8212; including Top 40, classic rock and hot adult contemporary &#8212; are woven together for a variety of popular songs all day, Burnette said.

The new programming is based on the &#8220;Jack FM&#8221; format, an iPod shuffle style that broadcast radio stations in the States are adopting to compete with satellite radio, Internet audio feeds and other new technologies.

Unlike a typical radio station that regularly plays 300 or 400 hits of a particular genre, Jack stations rotate anywhere from 1,000 to 1,500 songs of different genres, Burnette said.

&#8220;AFN worldwide is going to more family-friendly programming,&#8221; he said, while also embracing the Jack format &#8220;because of having one radio station serving multiple life groups overseas.&#8221;

The purpose is &#8220;to pull the audience together, instead of segregating listeners,&#8221; Burnette said.

&#8220;If we get music that we consider to be lyrically offensive to our community standards, meaning it&#8217;s demeaning to a human being, we have to make a call,&#8221; Burnette said. Choosing not to play a certain song isn&#8217;t censorship but smart business, he said. &#8220;If you turn your radio off, we&#8217;re not serving you. We have a mission of entertaining and informing the community. We have one community and one radio station and we don&#8217;t want to divide our formatting or divide our community.&#8221;

And then there are some airmen who rarely tune in, such as Staff Sgt. Jeremy Putnam, 24, who said he listens to mostly techno on his iPod. &#8220;Every time I turn the radio on, something a little bit before my time is playing,&#8221; he said.