Chandler getting a feel for his PACAF command while touring bases 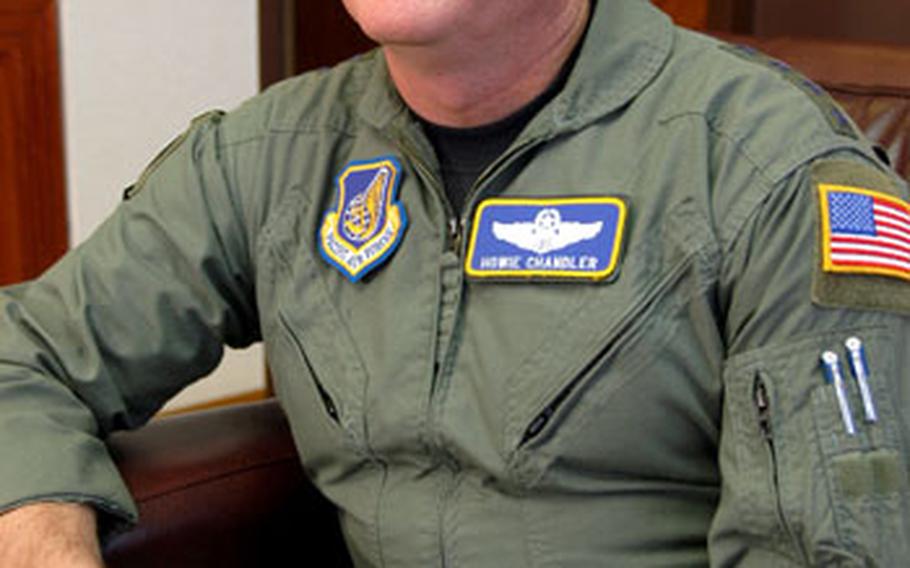 A veteran T-38, F-15 and F-16 fighter pilot and former Pentagon staffer, Chandler toured facilities and met airmen and military leaders as he set out less than two months into his new job getting to know his beat.

On Friday, after wrapping up a visit earlier in the week to Yokota Air Base and before heading to Kadena Air Base on Okinawa, Chandler sat down to his first interview as PACAF commander with Stars and Stripes, touching on a range of issues, from budgets to the future of the F-15 fighter jet.

Q: What are your goals?

A: We&#8217;re in really good shape here in the Pacific, I think, compared to other parts of the world in regards to security and stability, and we need to maintain that while taking care of the folks that are doing the great work for us every day.

Q: What&#8217;s the fiscal 2008 picture looking like compared to last year, and will airmen be asked to continue to pinch pennies and in what way?

A: If you&#8217;re asking if I&#8217;m happy with the 2008 budget, I will tell you not completely. I will tell you we&#8217;re better off in 2008 than we were in 2007, particularly in terms of base operating support and some of those quality-of-life areas that I know are important to families. That&#8217;s why we asked wing commanders to go back, look at what we had to do in 2007 to adjust to the budget realities we were faced with and correct those in 2008. Said in another way, make sure we get back to the standards that we expect as the world&#8217;s greatest air force.

Q: When will the rest of the F-15 fleet in PACAF be cleared for flight?

A: As you know, after the [Missouri National Guard] November accident, we grounded the entire fleet. Very quickly we were able to inspect and release the F-15E models. We have about 440 F-15 A&#8217;s through D&#8217;s in the fleet. Through an extensive inspection period we were able to release 60 percent of those back to flying. We still have about 40 percent of the fleet that&#8217;s grounded. It&#8217;s going to take probably well into February before we know how we will handle the remaining 40 percent.

Q: Does the F-15 face an early retirement?

Q: Is the Air Force going to continue its incentive program that pays airmen extra money each month for extending their tours in South Korea?

A: If asked, I would recommend that we continue that program. Its dividends in terms of stability in some units and stability for personnel and quite honestly, has saved some PCS dollars in moving people around.

Q: What about the training range? Has any progress been made on that issue in South Korea?

A: We&#8217;ve made some progress in Korea. Based on the relationship with our two air forces, I&#8217;m of the opinion that we&#8217;ll eventually be able together to get where we need to be in terms of training ranges.

Q: Is the Air Force still sending its planes from South Korea to Japan for training?

A: That happens, but I would also tell you that we send people to the peninsula for training as well.

Q: The amount of training they&#8217;re getting in South Korea is adequate?

A: I would tell you adequate. We always look for ways to train better. Training is our edge.

Q: About how many airmen is PACAF supplying to the war effort and do you expect that pace to continue?

A: Last year, we had about 1,400 personnel alone from Misawa (deploy). At this point in time we have about 1,000 personnel deployed from PACAF to various parts of the world. Based on what I see today, that pace will continue.