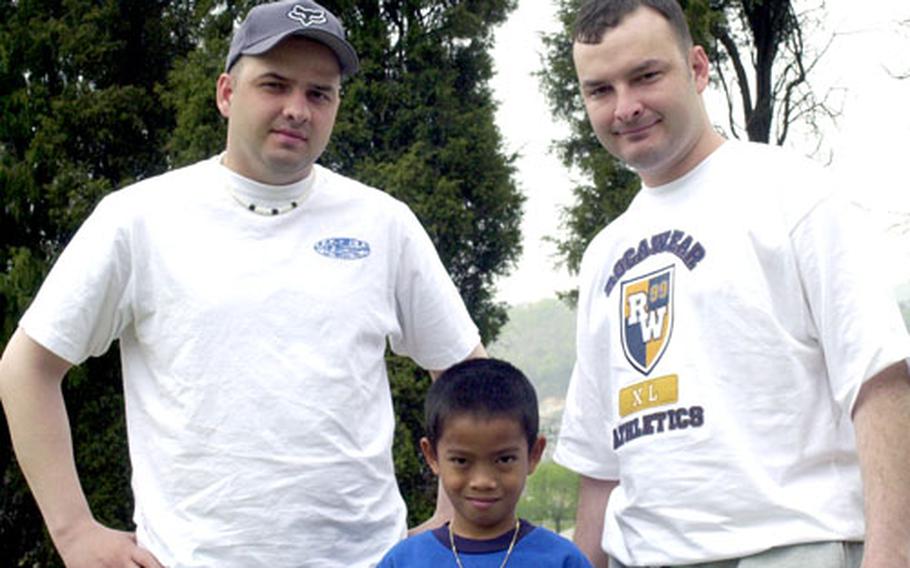 Sgt. Phillip Estep, left, with his 7-year-old son and his brother, Spc. Adam Estep. The Estep brothers talked to each other for the first time March 12 after meeting while Phillip was on guard gate duty at Camp Casey, South Korea. Their parents divorced when they were both young children. (Erik Slavin / S&S)

Separated from him as an infant after his parents divorced, he thought he&#8217;d found his sibling&#8217;s phone number online. Nobody answered.

Phillip never entirely gave up on meeting his brother, Adam, especially after learning through his grandmother that he had also enlisted in the Army

On March 12, Phillip pulled guard duty at Camp Casey&#8217;s main gate when another gate guard checking identification, who knew his story, looked over at him.

They began naming relatives from around Phillip&#8217;s home in Big Stone Gap, Va. It all fit together.

Soldiers prodded them, still in disbelief, to give each other a hug.

He called his father and told him about the meeting.

Adam said he moved around the country while growing up with his father, a Vietnam veteran who earned three purple hearts and a bronze star. Adam wondered about the rest of his family, but never brought it up.

Since meeting at the gate, Adam has spent time with Phillip&#8217;s family, which includes a wife and two children. The timing was fortunate; Adam left earlier in May for an assignment at Fort Hood in Texas.

Before he arrives at his next duty station, Adam plans to meet his family in Virginia.

His brother Phillip wasn&#8217;t the only surprise; it turns out that Adam has three younger brothers and two sisters back home.

Phillip and his other siblings were awarded to their mother when their parents divorced, but he says it was their grandmother, Minia Sturgill, who primarily raised them.

He plans to call his father for the first time, and holds no ill will against him for leaving.

Both brothers say they will keep in touch with each other. They plan to continue their Army careers for the time being, but say they would like to open up an auto shop or something similar together one day.