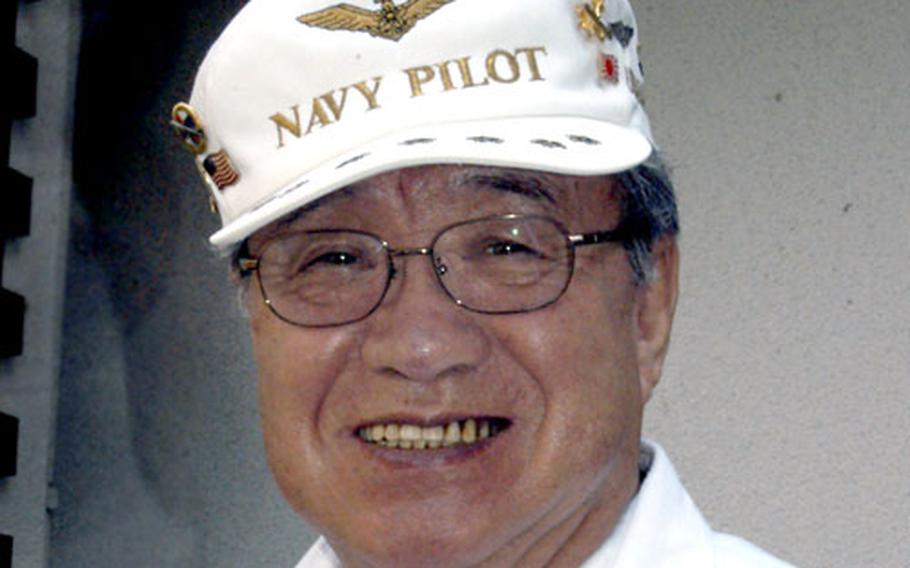 Masayuki Matsumuro, from Shin-Iwakuni, Japan, was scheduled for a kamikaze flight in September 1945, but it was cancelled after the U.S. dropped an atomic bomb on Hiroshima. (Juliana Gittler / S&S)

IWAKUNI, Japan &#8212; Kamikaze pilot Masayuki Matsumuro narrowly escaped death twice near the end of World War II. But it was a chance encounter with a U.S. soldier that changed his life forever.

At 14, Matsumuro signed up to be a pilot for the Japanese Imperial navy. At 15, he earned his flight credentials and volunteered for a suicide squadron planning an attack on U.S.-occupied Okinawa in September 1945.

A month before that mission, he visited his home in Hiroshima one last time, he recalled last week. At dawn on Aug. 6, he boarded a train to return to his base on Kyushu.

Two hours later, a U.S. B-29 Super Fortress named the Enola Gay dropped an atomic bomb on the city, killing Matsumuro&#8217;s family and destroying everything he had ever known.

The kamikaze mission was cancelled, and the war soon ended, giving the teenager something he hadn&#8217;t anticipated: a future.

He had, like thousands of other boys in Japan at the time, planned to die for his country. Nearly all kamikaze pilots were younger than 20, he said.

Boys in Japan at the time began military studies in school as soon as primary school finished. Matsumuro and other boys looked up to those in uniform and admired the uniforms themselves, he said.

When the Japanese navy ran low on aircraft, kamikaze pilots flew nonmotorized missile-like planes dropped from a bomber. They could only steer into a target, propelled by their descent.

After the war, Matsumuro spent months searching for word of his family before moving to Osaka, where he opened a shoeshine stand and noodle shop and stayed away from the occupying American forces. That was until a young GI made a pass at Matsumuro&#8217;s fianc&#233;e.

He fought the soldier and landed in a U.S. military jail.

At the court-martial, Matsumuro told his story to the judge through a Japanese-speaking U.S. soldier serving as his translator &#8212; his first surprise. The judge then asked the GI who Matsumuro had fought what had happened.

The GI concurred with the story. Matsumuro not only was freed, but also was given gifts as an apology.

He began to see Americans differently and befriended his former adversary, even inviting the GI and his commander to his wedding.

The soldier later helped Matsumuro join an exchange program to study in the States for five years.

As an adult, Matsumuro dedicated himself to helping people in poor Asian countries as a means to fostering peace in the region so a war will never be necessary again.

He joined the national veterans group Unabarakai with other former Japanese navy pilots and began interacting with American veterans of the Pacific War, visiting Pearl Harbor and welcoming U.S. vets back to Japan.

Matsumuro, now 77, continues to share his story and build bridges to U.S. forces. He was the guest speaker at the Marine Corps Ball at Marine Corps Air Station Iwakuni in November.

He also strives to educate young Japanese students, who he says are forgetting the past &#8212; something he fears could allow another war to happen. He recalls a conversation a friend of his overheard between two young boys at the Hiroshima peace park who were surprised that Japan and the United States had been at war.

For Matsumuro, death once seemed inevitable. But escaping death has allowed him to help the world and to work to prevent future war.

Former kamikaze pilot Masayuki Matsumuro once pledged to die for his country and his emperor by crashing his plane into an enemy target.

But the suicide pilots of World War II were not like suicide bombers attacking today in Iraq and elsewhere around the world, he said.

Matsumuro volunteered to die for a declared war, one Japanese leaders said was essential to keep Japan alive. And there was one clear enemy, he said &#8212; one wearing a uniform.

Today&#8217;s suicide bombers are indiscriminate and kill innocent people, something a kamikaze wouldn&#8217;t do, Matsumuro said.

He added it is hard for people today to understand why young men wanted to be kamikaze pilots. In the 1940s, military education for schoolboys in Japan started at age 12. Boys looked up to men in uniforms and wanted to follow them, he said.