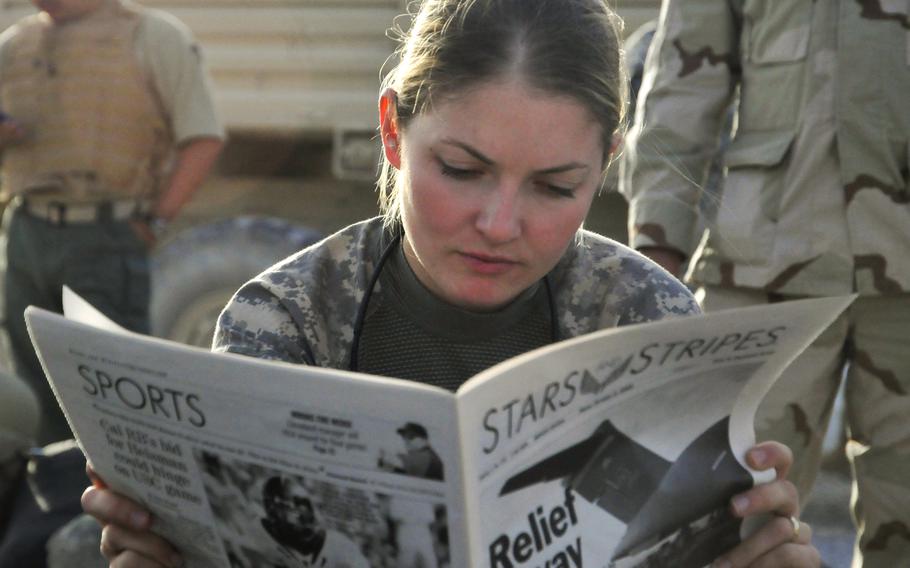 In a 2009 file photo, First Lt. Tracy Tyson from Seattle, Wash., assigned to the 5th Brigade 2nd Infantry Division reads Stars and Stripes in Kandahar Airfield, Afghanistan, while waiting for a flight to Forward Observation Base Wolverine. (U.S. Navy)

WASHINGTON — Not even Pvt. Beetle Bailey is immune to the military’s falling budget.

The iconic military-themed comic strip is one of a number of features disappearing from the daily print edition of Stars and Stripes, which, starting today, drops from an average of 40 pages to 32 pages. The 63-year-old comic strip will soldier on in the weekend edition.

Facing a daunting array of funding challenges that combines familiar military budget woes with problems common to most print newspapers, Stars and Stripes is being forced to trim some print operations even as it tries to accelerate a shift toward digital distribution, newspaper executives said.

Among the money-saving changes that print readers will notice:

• Comics pages in the weekday newspaper will be reduced from three pages to one, while the Sunday comics section will drop to eight pages from 16.

• Several features, including Dear Abby, Click and Clack Talk Cars and the Sudoku game, will be eliminated.

• Columns by opinion writers Clarence Page and Jack Kelly will be dropped, along with jobs and finance columns by Janet Farley and Liz Pulliam. A long-running freelance column about volksmarching in Europe also was cut.

• Newswire stories from Scripps-Howard News Service will no longer be used, although Stars and Stripes will continue to use stories from The Associated Press and others.

The changes are being forced by an expected 20 percent drop in revenue from 2013 to 2014, publisher Max D. Lederer Jr. said.

Stars and Stripes generates well over half its revenue through ads, subscriptions and single newspaper sales, but also receives a portion of its budget from Department of Defense appropriated funds, Lederer said.

That amount is subject to the same 10 percent sequestration cut the rest of the military is enduring.

The newspaper’s operations and maintenance appropriation has been falling for several years, executives said, from about $13 million in 2010 to an expected $7.7 million next year.

The cut is compounded by the fact that other DOD components that advertise in the newspapers have less money to buy ads, Lederer said.

Meanwhile, the newspaper’s print readership has been falling for years, to about 160,000 because of troop withdrawals from Iraq and Afghanistan. Fewer readers means the prices for advertisements must fall.

The impact on Stars and Stripes’ staff will be considerable, with an estimated 40 positions worldwide — 17 percent U.S. civilian employees worldwide — expected to be cut in fiscal 2014, Lederer said.

Stars and Stripes editorial director Terry Leonard said the changes are neither unexpected nor devastating to the paper’s core mission. He pointed out that the paper’s “news hole” — the amount of space allocated to breaking news and feature articles — will not shrink, and may even expand marginally.

“This reorganization happening now is the same one we’ve known would happen and have been working on for five years,” he said. “We’ve planned for when the print circulation [in war zones] would — happily, I think — decline.”

The future of the paper is digital, he said.

Supplying news through free newspapers to troops in war zones will remain a top priority as long as they are there, Leonard said.

The paper will search for new ways of connecting with readers electronically and providing vital content, Lederer said.

“People are less engaged in our print product, but more engaged than ever in our digital product,” Lederer said. “Consequently, we’ll allocate fewer assets to print and more and more to digital.”