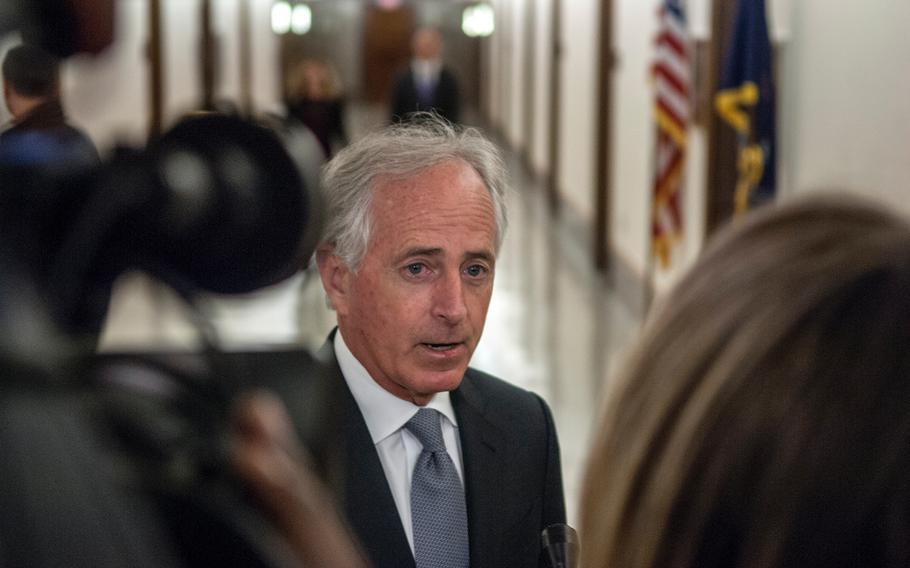 WASHINGTON — A Senate committee chairman, several committee lawmakers and a top Defense Department official on Tuesday said Russia is skirting several critical treaties with the United States to limit its stockpile of missiles and other weapons.

Sen. Bob Corker, R-Tenn., chairman of the Senate Foreign Relations Committee, said it is unlikely that Russia will adhere to its treaty commitments as it wreaks havoc around the world.

“We have significant problems with Russian compliance” with several treaties, Corker said during a committee hearing. “It should come as no surprise to any of us that Russia has been cheating on its treaties. [Russian President] Vladimir Putin’s government has annexed Crimea, ...interfered with elections — including our own — used chemical weapons to poison individuals on British soil and even purportedly hacked U.S. utilities. Given that record, he’s not likely to let treaty commitments get in his way either.”

The Tuesday hearing, which hosted officials from the State and Defense departments, marks the fourth such panel discussion Corker’s committee has held on Russia since July. Earlier this month, the committee examined NATO’s value to the United States, with a consensus that the military alliance remains critical to fending off Russian aggression.

On Tuesday, the Senate Foreign Relations Committee examined four key treaties with the Russians: the new Strategic Arms Reduction Treaty, or START; the Intermediate-Range Nuclear Forces, or INF, Treaty; the Open Skies Treaty, and the Chemical Weapons Convention. All the treaties are aimed at the reduction of weapons, and Russia is not in compliance with most of them, Corker said.

For example, the “Russian federation remains in violation of its obligations under the INF treaty,” David Trachtenberg, deputy undersecretary of defense for policy, told lawmakers. “We have been more than patient and have provided Russia with ample opportunities to come back into compliance but to no avail.”

The INF Treaty, a 1987 agreement, requires the destruction of Russia’s intermediate-range and shorter-range missiles.

The administration of President Donald Trump has determined Russia has violated the treaty, which was first announced in July 2014 under former President Barack Obama, Trachtenberg said. Trump White House officials have reviewed the intelligence and came to the same conclusion as their predecessors, he said.

“The evidence is conclusive, the violation is real and it goes against the core purpose and restrictions of the INF Treaty,” Trachtenberg said.

There are broader implications for the future of arms control due to the lack of trust that has been created by Russia, he said.

“It is difficult to envision a way forward for the United States and Russia to rebuild that trust and achieve a level of transparency that could lead to a brighter future for arms control,” Trachtenberg said. “The onus to create the conditions for this trust falls on both the United States and Russia but Moscow will bear the burden should these efforts fail, as Russia’s actions created the situation that we currently find ourselves in.”

Russia also is not in compliance with the new START agreement, which was a renegotiated under Obama in 2010. The nuclear arms reduction treaty replaced a previous START agreement and is expected to expire in 2021.

“When it was negotiated in 2010, we hoped it would represent a new relationship with the Russian federation and would lead to broader cooperation on a number of fronts,” Trachtenberg said. “Since that time, what we’ve seen is a clear deterioration.”

Now, in quoting comments from Sen. Bob Menendez, D-N.J., during the hearing, Trachtenberg said the Trump administration must remain “clear eyed” about the Russian threats.

Sen. Jim Risch, R-Idaho, a lawmaker who objected to the new START agreement, said the plan didn’t go far enough. Today, trust is lacking, though he agreed the United States should deal with the Russians.