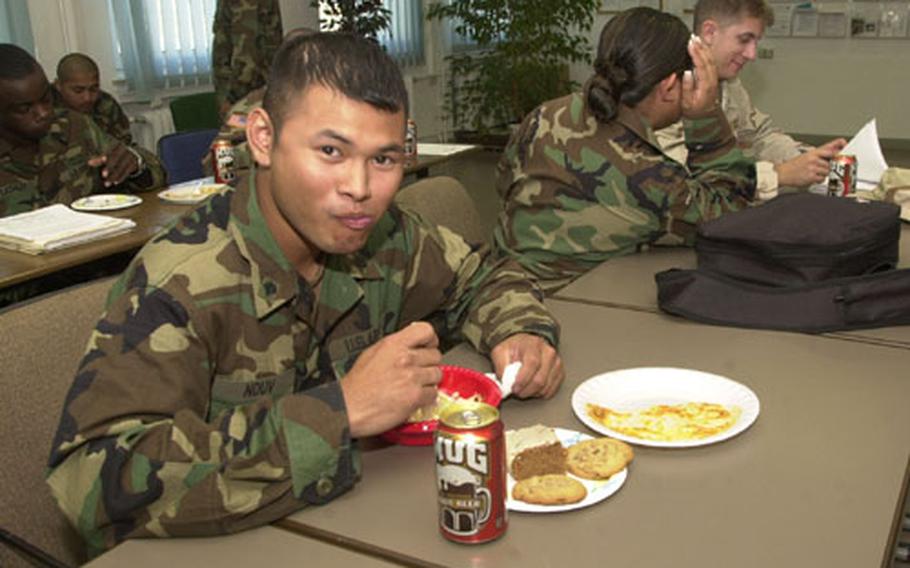 Spc. Rethy Nouv polishes off his salad and a plate of lasagna, and has a dessert to go. The young soldier didn’t go for seconds during the "Baumholder Hero Day" luncheon on Wednesday, saying that he lost his appetite in Iraq, where he survived a bomb attack. The luncheon follows a reintegration class for soldiers returning from Iraq. (Terry Boyd / S&S)

BAUMHOLDER, Germany &#8212; A skinny soldier who looks 20-going-on-12 peeks around a door in the festive Army Community Service lounge that has been turned into an impromptu kitchen.

&#8220;Thanks for the food,&#8221; he says softly, almost unnoticed as volunteers dish out food and conversation to a line of soldiers.

For the past few weeks, Wednesday has been &#8220;Baumholder Hero Day.&#8221; Classes to help soldiers re-enter normal life, followed by an appreciation luncheon is the way this base is thanking its soldiers who are returning early from Iraq, on their way to different units or separating from the military.

Although the Army can be a pretty impersonal place, the Baumholder ACS office, along with the 222nd BOB, is on a mission to make sure no one feels taken for granted. This luncheon is from the heart.

The night before last Wednesday&#8217;s event, Camille Jackson, the ACS employment readiness manager, made four or five huge pans of lasagna. It would be enough for maybe 80 helpings, she said.

Her husband, Sgt. Marcus Jackson, is deployed with the 90th Personnel Support Battalion in Balad, Iraq.

Before each luncheon, Buchs or his Command Sgt. Maj. Ann McDaniels hands out certificates &#8220;in appreciation of heroic duty serving in Operation Iraqi Freedom.&#8221; Spouses get gift candles in recognition of their sacrifices, and Buchs or McDaniels shakes every soldier&#8217;s hand.

On Wednesday, soldiers chose between lasagna and spaghetti. There were salads and soft drinks. And, of course, dessert.

The diners were grateful, if somewhat disoriented, as they enjoyed a moment of &#8220;normalcy&#8221; after having not known anything but anxiety for six months.

Back in Germany for a week, Spc. Rethy Nouv was still getting used to wearing BDUs instead of desert camouflage, to seeing green forests instead of brown sand.

And to still being alive.

About 1 p.m. Oct. 12, an Iraqi teen threw an improvised bomb at Nouv&#8217;s squad from Headquarters, Headquarters Battery, 4th Battalion, 27th Artillery Regiment as it patrolled in central Baghdad. Both of Nouv&#8217;s feet were injured when the Humvee in which he was riding returned to earth after the blast flung it up in the air. Nouv, a squad automatic weapon gunner, and two other soldiers were injured.

After downing a plateful of lasagna, Nouv, 20, talked about his mixed feelings. How he feels guilty about not being with his unit, but satisfied &#8220;that I did my time&#8221; and is now ready to go on to a new assignment with a Fort Lewis, Wash.-based Stryker Brigade.

For some fresh off the transport planes, the luncheon may be the first home-cooked meal in months. One soldier kept coming back &#8220;for more and more and more macaroni and cheese. He hadn&#8217;t had it since he went to Iraq,&#8221; Saunders said.

The whole idea was to get Baumholder Family Readiness Groups involved, and maybe get some donations from Army and Air Force Exchange Services or the Defense Commissary Agency. Though a few outsiders have stepped forward &#8212; Gaines&#8217; Air Force husband brought his comrades from the Allied Air Forces North contingent to serve one week &#8212; after more than 300 meals served, that hasn&#8217;t happened.