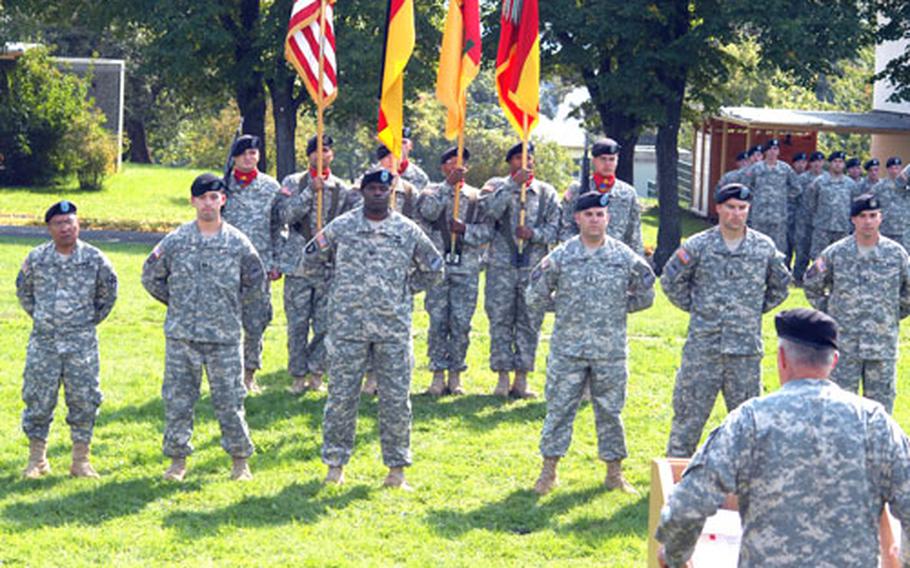 Their duties took them out of their units as individual augmentees, but they still called the 1st Armored Division home. And at a ceremony Thursday at Smith Barracks, six soldiers from the &#8220;Iron Brigade&#8221; were welcomed back from their deployments.

The proceedings were brief, and thousands of other family members still await the rest of 1st AD&#8217;s 2nd Brigade, which is scheduled back from Iraq sometime in November.

Still, on Thursday, the division brought back a handful of its own. Along with Lanuevo, Carlson and Garcia, the Baumholder community also welcomed home Capt. Joel Leflore, 1st Lt. Jason Waters and Sgt. 1st Class Corey Walter.

U.S. Army Europe commander Gen. David McKiernan, who was visiting Baumholder for the day and meeting with spouses of other deployed soldiers, said he was proud to be able to formally thank the six soldiers.

McKiernan said he understood that the soldiers had other reunions on their minds, but that the ceremony gave those in attendance a chance to thank them.

&#8220;This is probably not the most important event of your return to the Baumholder community,&#8221; he said.

The varied experiences of the six soldiers in Iraq and Afghanistan will help them wherever their career may take them, McKiernan said.

He also told the six soldiers to take pride in the job they&#8217;ve done, and the Army they belong to. The Army, he said, is the most respected job out there, even beating out police officers and firefighters.

McKiernan held closed-door meetings with family support groups and rear detachment commanders as part of the visit to the Baumholder military community. Saying they wanted meeting participants to speak candidly, USAREUR barred Stars and Stripes from attending the meeting.

McKiernan said after the welcome home ceremony that the meeting was not about the redeployment status of the 2nd Brigade.