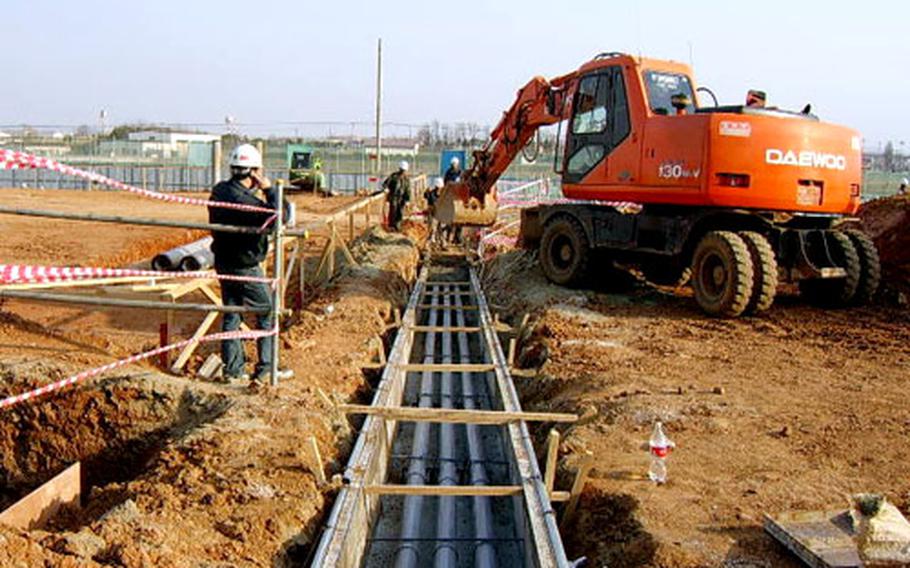 Workers are shown in early stages of construction of barracks and headquarters building at the Army’s Camp Humphreys in South Korea last week. The eight-story barracks is set to become the U.S. military’s tallest barracks in South Korea when it’s completed in August 2007. (Seth Robson / S&S)

Workers are shown in early stages of construction of barracks and headquarters building at the Army’s Camp Humphreys in South Korea last week. The eight-story barracks is set to become the U.S. military’s tallest barracks in South Korea when it’s completed in August 2007. (Seth Robson / S&S) 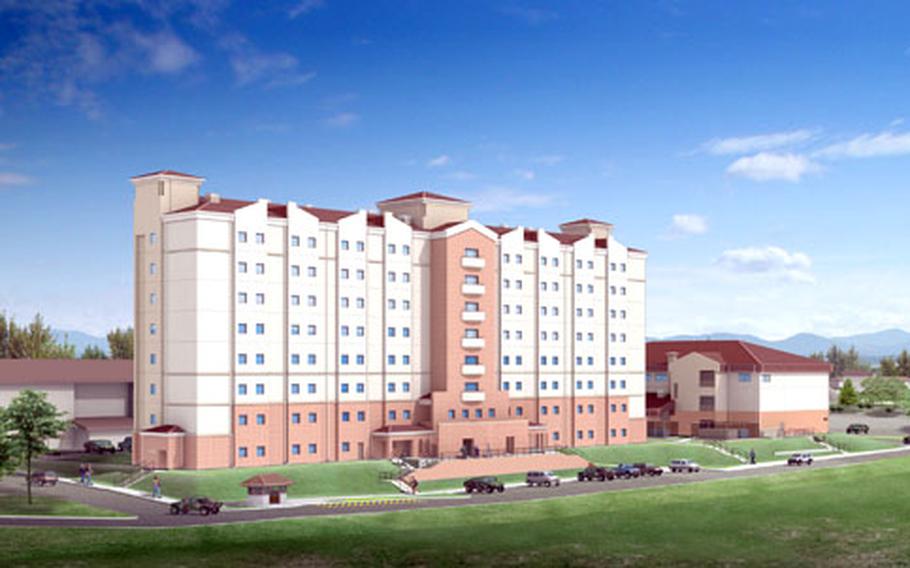 An artist&#39;s rendition of the eight-story barracks, center, and adjacent headquarters building, right, at the Army&#39;s Camp Humphreys in central South Korea. (Courtesy of U.S. Army)

PYONGTAEK, South Korea &#8212; Officials at Camp Humphreys in South Korea were to hold a formal ceremony Monday to mark the start of construction on the eight-story building that is set to be the tallest U.S. military barracks on the Korean peninsula when it opens in August 2007.

An adjacent three-story headquarters also is planned, slated for completion in June 2006.

The ceremony is scheduled for 1:30 p.m. at the construction site on the western side of the post, &#8220;just to specify that this is the beginning&#8221; of the $16.7 million project, said Brandi Dennis-Pe&#241;a of the U.S. Army Corps of Engineers Far East District&#8217;s Pyongtaek Resident Office at Camp Humphreys.

Camp Humphreys is a 1,250-acre helicopter base in Pyongtaek in west-central South Korea. But under an agreement between South Korea and the United States, the base is to be enlarged to eventually become the U.S. military&#8217;s biggest installation in South Korea and headquarters for senior military commands now based in Seoul.

Workers last month tore down buildings on the site and leveled the ground to clear the way for the construction, and some preliminary work already has started on the foundation, said Dennis-Pe&#241;a.

The barracks will house 464 soldiers. Each of its 232 rooms are designed for two occupants, will measure 336 square feet and have a bathroom, shower, sink and storage closets.

In addition to soldiers&#8217; rooms, the first floor will have two large laundry rooms, a kitchenette and storage rooms, two small offices, a large multipurpose room, and two &#8220;mud rooms&#8221; in which soldiers will be able to wash down their gear after getting in from the field.

On the second through eighth floors, plans call for a small lounge, a storage area and a small laundry room as well as soldier&#8217;s rooms.

The Shin Sung Engineering and Construction Co. Ltd. is carrying out the construction under contract with the U.S. Army Corps of Engineers.