Ceremony remembers aircrew shot down by North Koreans in 1969 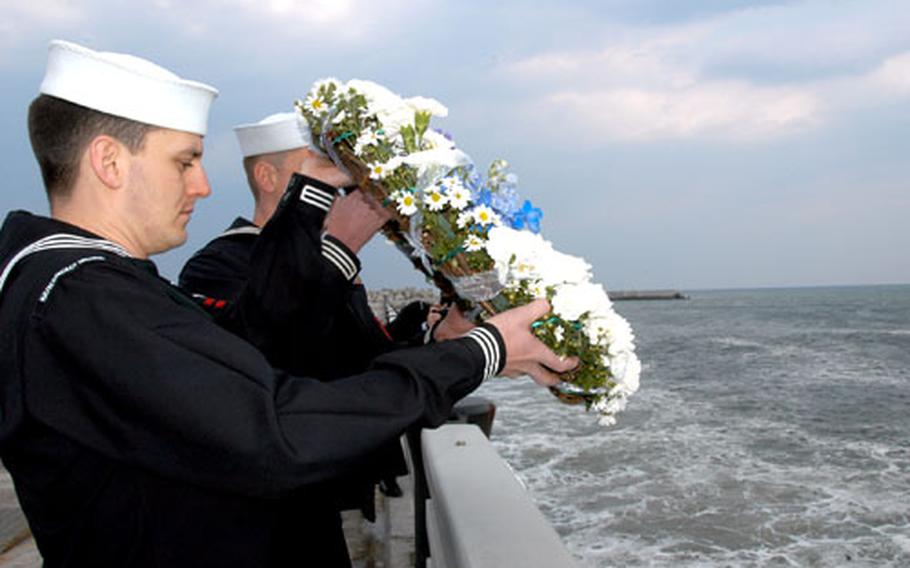 Petty Officer 2nd Class Paul Dinkins, a cryptologic technician with the Naval Security Group Activity at Naval Air Facility Misawa, Japan, gets ready to toss a wreath of flowers into the Pacific Ocean during a ceremony Friday in Misawa to honor the 31 servicemembers killed aboard an EC-121 shot down by North Korean fighter jets 36 years ago. (Jennifer Svan / S&S)

Petty Officer 2nd Class Paul Dinkins, a cryptologic technician with the Naval Security Group Activity at Naval Air Facility Misawa, Japan, gets ready to toss a wreath of flowers into the Pacific Ocean during a ceremony Friday in Misawa to honor the 31 servicemembers killed aboard an EC-121 shot down by North Korean fighter jets 36 years ago. (Jennifer Svan / S&S) A bell tolled every time a name of one of the 31 servicemembers was read aloud during Friday&#39;s ceremony at Misawa Fishing Port. (Jennifer Svan / S&S)

MISAWA, Japan &#8212; Petty Officer 2nd Class Paul Dinkins didn&#8217;t know the 30 Navy personnel and one Marine he and fellow Misawa servicemembers paid homage to Friday afternoon in a somber ceremony by the ocean.

Dinkins was born nearly a decade after North Korean MiG-17 fighters shot down a Navy EC-121 reconnaissance plane on April 15, 1969, over the Sea of Japan, off the North Korean coast, killing everyone on board.

A Marine, an Air Force chaplain and a handful of Navy sailors and airmen, mostly from NSGA, gathered on a blustery pier battered by salty waves at Misawa Fishing Port for the ceremony held every year on the anniversary of the incident.

The names of the 31 who died were read aloud and a wreath of flowers was tossed into the ocean about the same time the EC-121 was shot down.

The EC-121 departed from Naval Air Facility Atsugi near Tokyo. Most on board were part of Fleet Air Reconnaissance Squadron One, or VQ-1, but nine were from NSGA Kamiseya. The aircraft, according to news reports at the time, was on a routine reconnaissance mission over the Sea of Japan with orders to fly no closer than 50 nautical miles (about 57 miles) from North Korea.

An excerpt published in Time magazine&#8217;s April 25, 1969, issue read: &#8220;For nearly seven hours, the aircraft followed a clockwise course around the Sea of Japan. Then, a ground station in South Korea radioed a sudden warning: two North Korean MiG jet fighters had taken off from a base normally used only for training and were headed toward the EC-121. The Navy plane acknowledged that message, and turned seaward from a position well outside the twelve-mile limit claimed by North Korea. It was to end its mission prematurely and return to Atsugi. On monitoring radars in Japan, the blips of a North Korean jet and the U.S. aircraft met and passed; then the EC-121 disappeared from the screen altogether. It was not heard from again.&#8221;

Only two bodies were recovered.

Petty Officer 3rd Class Jared Buttrick, a Navy linguist and NSGA cryptologic technician who organized Friday&#8217;s ceremony, said a lot of his friends are flying similar missions every day. &#8220;I don&#8217;t think it&#8217;s as likely to happen in this day and age, but things go wrong, people get scared,&#8221; he said.

Said Petty Officer Scott Johnson, an NSGA cryptologic technician: &#8220;We do go up a lot and it&#8217;s always on your mind. The aircrew community is like a brotherhood. We feel a close bond with that crew that perished.&#8221;

Cmdr. James Brokaw, NSGA commander, said the ceremony tradition followed NSGA Kamiseya to Misawa when the unit moved there in 1972.