Pat Carey&#39;s late husband, Bernard, survived the disaster of Exercise Tiger in World War II. He died last year and she brought his ashes to leave behind in England on the 60th anniversary of the tragedy. (Ron Jensen / S&S)

Pat Carey&#39;s late husband, Bernard, survived the disaster of Exercise Tiger in World War II. He died last year and she brought his ashes to leave behind in England on the 60th anniversary of the tragedy. (Ron Jensen / S&S) 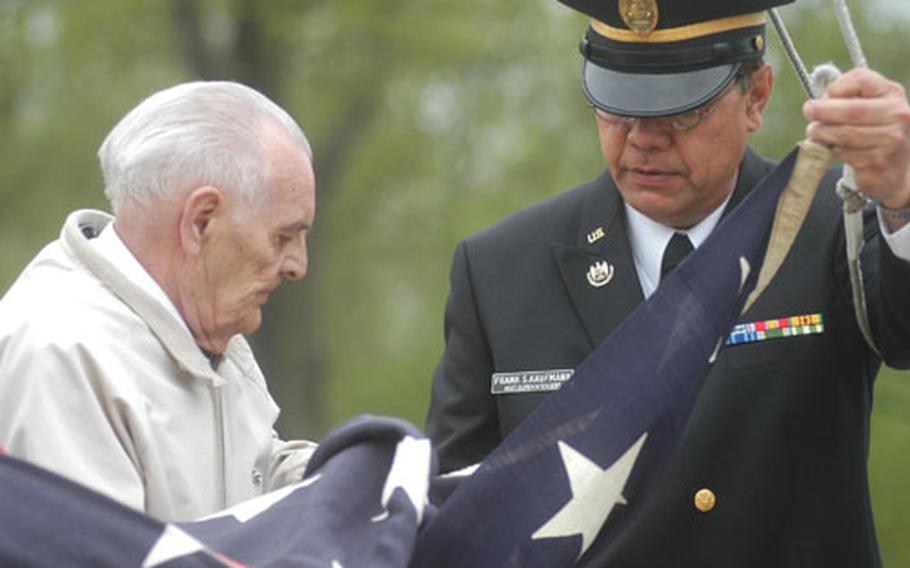 Tom Glynn, left, a survivor of the Exercise Tiger tragedy during World War II, and Frank Kaufmann, acting superintendent of the American Military Cemetery near Cambridge, England, prepare Wednesday to raise a flag that flew on LST 289. (Ron Jensen / S&S)

MADINGLEY, England &#8212; For a few minutes Wednesday, a flag flew above the American Military Cemetery near Cambridge that was a witness 60 years earlier to the greatest training tragedy in World War II.

The flag, which was hoisted by Tom Glynn, 77, of Villas, N.J., flew aboard LST 289 when German patrol boats intercepted a training exercise known as Tiger off the southwest coast of England on April 28, 1944.

Glynn, who was a seaman aboard the ship, raised the flag Wednesday above a cemetery where 401 of the 749 men killed that night are either buried or remembered on the Wall of the Missing.

Glynn said the ship&#8217;s skipper had the flag and flew it every April 28 to honor those who died. When the skipper became too ill, he gave the flag to Glynn, who thought it appropriate to fly it in England on the 60th anniversary of Exercise Tiger.

Glynn&#8217;s son Paul was part of the traveling party, as was Pat Carey, from Pennsylvania, whose husband, Bernard &#8220;Bud&#8221; Carey Jr. was a survivor of Exercise Tiger. He died last year and his widow wanted to spread his ashes on the English Channel where the tragedy claimed the life of Bernard&#8217;s best friend, Jack Gallagher, who is buried at Madingley.

It wasn&#8217;t possible for her to take the ashes to the Devon coast where the tragedy took place, but she managed to find a private piece of English soil in which to bury the ashes, something he would appreciate, she said.

A local British veterans group provided the color guard for the ceremony, which lasted no more than 10 minutes. One of the color guard members was Herbie Ketch, who was a Royal Marine on duty at Dartsmouth on the night of Exercise Tiger.

&#8220;It was my unfortunate job to pick up troops that were drowned and take them into the beach where they were identified by their dog tags,&#8221; he said.

After the flag was raised, a prayer was spoken by Frank Kaufmann, acting superintendent of the cemetery, and a proclamation from the White House was read.