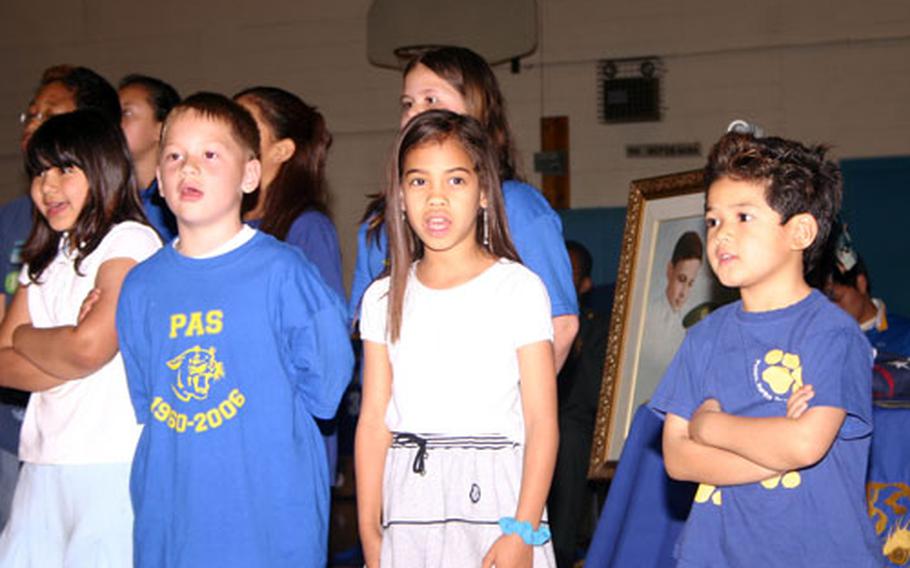 Members of the Pusan American School choir sing during a ceremony marking the school’s closing after 46 years of operation on Camp Hialeah, South Korea. The school is shutting down this month because Camp Hialeah will close later this year. (Kevin Jackson / U.S. Army)

PYEONGTAEK, South Korea &#8212; What officials say is the oldest Defense Department school in South Korea, Pusan American School, is in the final two weeks of its 46-year history.

The school in Busan is closing because Camp Hialeah, which houses it, is slated to close later this year and be turned over to South Korea in 2007.

The Pusan American School will close June 16, after which work crews will haul out the last of the computers, furniture and other equipment for distribution to other Department of Defense Dependents Schools on the peninsula, said Kevin Jackson, chief spokesman for the Army&#8217;s Area IV Support Activity.

Although Pusan American&#8217;s high school graduation ceremony isn&#8217;t until Friday, the school held its formal closing ceremony in the school gym last Friday. The event drew school staff and senior DODDS officials from around the Pacific, and also 19 alumni, eight of them from outside South Korea, Jackson said.

&#8220;I would say it was generally a joyous occasion,&#8221; Jackson said. &#8220;It was an opportunity to reflect and celebrate 46 years of outstanding education and camaraderie among the students and faculty and community at Camp Hialeah.

&#8220;Certainly, there were moments that were sad and a few tears were shed, but overall it was a fabulous ceremony and it should have provided some closure for the community,&#8221; he said.

Eighty-eight students in pre-kindergarten through 12th grade attend the school, which officials said is the smallest in the DODDS system. Before the 2004-05 school year, its student body typically numbered around 200, Jackson said.

The closing of Camp Hialeah is part of a U.S.-South Korean agreement under which the U.S. military is closing some installations and consolidating its forces into two regional hubs, one in Pyeongtaek, the other in the Daegu-Busan area.

The school began operation in 1960 as David N. White Elementary School, named for an Army first lieutenant killed in action in Wonju during the Korean War. DODDS added a high school in 1967.

Jackson said principal Keith Henson drew &#8220;thunderous&#8221; applause when, after praising the contributions of the school&#8217;s faculty and staff, he spoke of the students.

&#8220;What can you say about the Pusan American School students?&#8221; Jackson quoted Henson as saying. &#8220;They do everything. They work to fulfill their academic goals, they participate in journalism and organized events, performing plays and celebrations in recognition of our history and the great diversity of our country that has made our country great.&#8221;

Henson said they also have taken part in &#8220;fundraising for good causes, and supporting our greater community for people who need more than their society often can provide them. And they play sports, all sports, whether they want to or not. Thank you for that.

The school&#8217;s memorabilia, including the first U.S. flag to fly over the elementary school, will be inventoried and shipped for display to the American Overseas School Historical Society in Wichita, Kan., Jackson said.