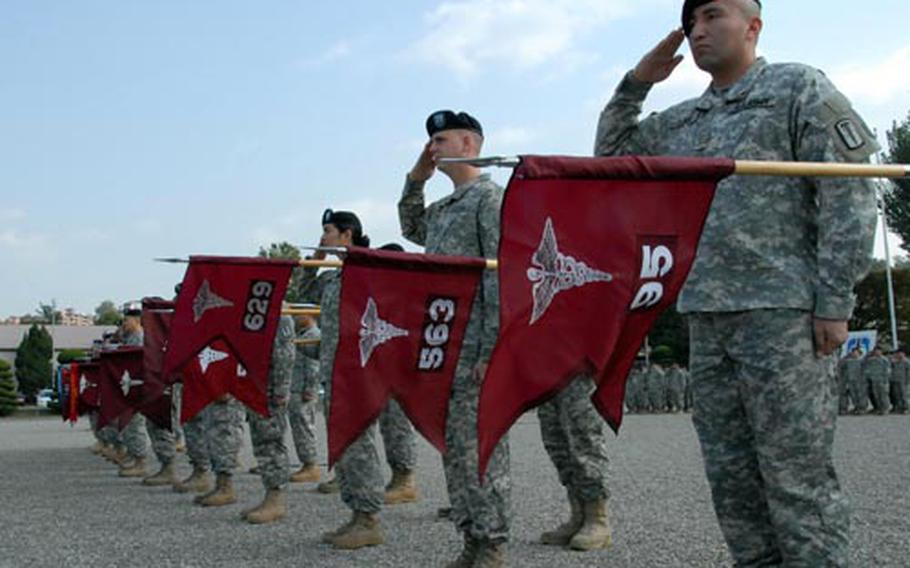 Soldiers salute Thursday during a ceremony at Knight Field, where the 16th Medical Logistics Battalion was deactivated, the 65th Medical Brigade was activated, and the colors of the 18th Medical Command were cased until the command is established in Hawaii next fall. (Ashley Rowland / S&S)

SEOUL &#8212; The 18th Medical Command cased its colors, a brigade was activated and a battalion was deactivated Thursday during a ceremony at Knight Field, marking a transformation of U.S. Forces Korea&#8217;s medical structure.

The changes are mostly administrative and will not affect the number of medical providers at U.S. military bases in South Korea or require them to move.

The 18th MEDCOM will uncase its colors next fall in Hawaii, where its headquarters are relocating as part of a transformation of the 8th Army. Because the unit can&#8217;t have a headquarters in two places, it is being replaced by another unit, the 65th Medical Brigade.

The 65th Medical Brigade is the only unit in the U.S. Army with two missions &#8212; providing medical care during an armistice and being ready to fight if necessary. The 65th includes 1,000 U.S. soldiers, 425 South Korean soldiers and 600 civilian staff.

The 18th MEDCOM has been in South Korea for 24 years.

The 16th Medical Logistics Battalion was deactivated Thursday, and was one of the last medical logistics battalions in the Army. Its personnel will move to a blood detachment and a logistics company within the 168th Multifunctional Medical Battalion, said Master Sgt. Desmond Smith, spokesman for the Brian Allgood Army Community Hospital.