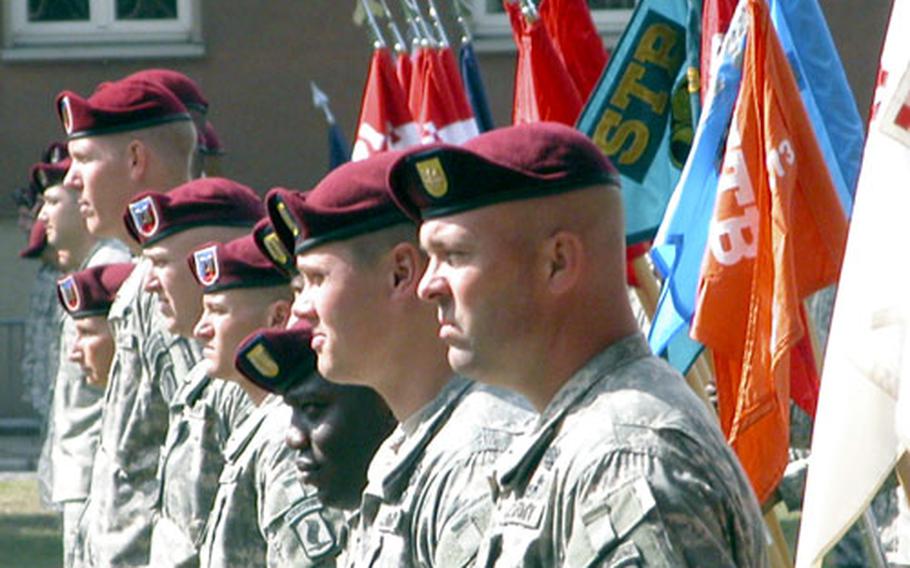 BAMBERG, Germany &#8212; Few units are as emblematic of the Defense Department&#8217;s vision of the transformed Army as the 173rd Airborne Brigade.

The Sky Soldiers, based in Vicenza, Italy, are doubling their battalion-size units and number of soldiers, adding new and enhanced capabilities in the process, all with the goal of being the agile, independent and modular force that the Pentagon has touted as the mainstay of 21st-century warfare. The brigade will have more than 3,000 soldiers, up from about 1,500. About 60 percent of those soldiers are new arrivals.

The 173rd is the only brigade in the Army that does not answer to a division, said Maj. Nick Sternberg, a unit spokesman. Members wear their brigade insignia on their shoulder, instead of the patch of a higher command.

The brigade has added cavalry and artillery battalion-size units, as well as a special troops battalion that will give the 173rd its own engineers and other positions, negating the need to borrow from other units for deployment.

&#8220;The capabilities have dramatically increased,&#8221; Col. Charles Preysler, the 173rd commander, said after the ceremony Friday in Bamberg.

In the past, the 173rd would have had to borrow units or specialized troops from elsewhere to deploy, Preysler said.

But with all the brigade&#8217;s newly acquired oomph come some logistical challenges. Most prominently, only two of the brigade&#8217;s six battalion-size units will be with headquarters at the cramped Caserma Ederle base in Italy. The other four will be based in Bamberg and Schweinfurt, for the foreseeable future, another aspect that, for better or worse, makes the brigade unique in the Army.

It would be ideal to have the whole brigade in one spot, Preysler said, but videoconferencing and e-mail alleviate some of the organizational hurdles that come with the geographic separation.

And eventually, he said, the brigade will be together in Italy. How soon that will happen is another question. Italian and U.S. officials for the past year or so have been negotiating over the use of the Italian-run Dal Molin airfield, which is near Caserme Ederle.

While geographically separated, some units have had to morph when they were reassigned under the Sky Soldiers. The 1st Infantry Division&#8217;s 1st Squadron, 4th Calvary Regiment ditched its M-1 tanks and Bradley fighting vehicles this year for more-mobile Humvees and other vehicles needed for it&#8217;s new mission with the 173rd.

Friday&#8217;s ceremony, which capped a couple of days of visiting by the commander and 173rd&#8217;s Italy-based pieces, was a chance for everyone to get together and be reminded that they&#8217;re all one brigade, Preysler said.

Being separated is nothing new to these troops, he added. That is consistent with its most recent deployment to Afghanistan, which ended earlier this year, he said.

&#8220;This is how the brigade was commanded and controlled over thousands of square miles&#8221; during the last deployment, Preysler said. &#8220;We fight this way, distributed across the battlefield.&#8221;