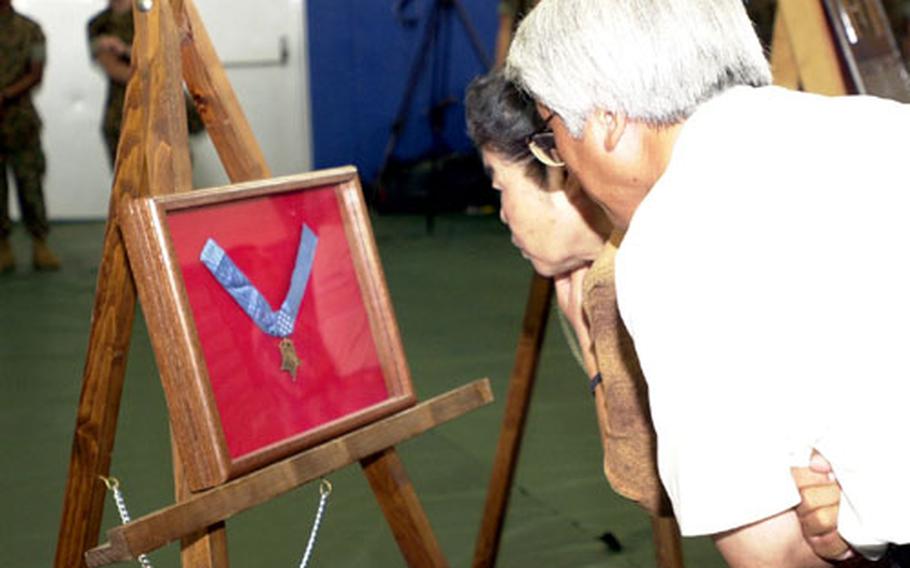 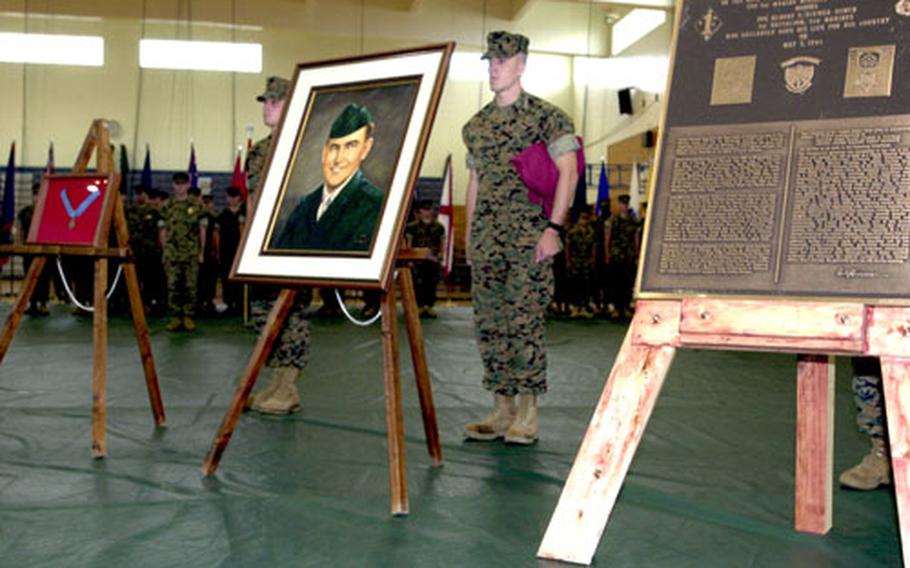 A bronze plaque, painting and framed Medal of Honor are unveiled during a commemoration ceremony Wednesday in honor of Pfc. Albert E. Schwab, for whom Camp Schwab is named. (Fred Zimmerman / S&S)

CAMP SCHWAB, Okinawa &#8212; Marines, sailors and local officials gathered in the gymnasium here Wednesday to pay tribute to the camp&#8217;s namesake: Medal of Honor recipient Marine Pfc. Albert E. Schwab, who was killed on May 7, 1945, during the Battle of Okinawa.

The 60-year commemoration ceremony was not only to honor Schwab but also to &#8220;inspire the Marines,&#8221; said Lt. Col. David Coggins, camp commander.

Schwab&#8217;s family sent a letter, which was read during the ceremony, thanking the Marines for the commemoration. The family said Schwab was an accomplished student, athlete and a friend to many.

&#8220;Moreover, Albert was more than a photo, medal, or a name,&#8221; the letter said. &#8220;We thank you especially today for remembering him as a person in addition to honoring him for his heroic acts. We are proud of him and of his service to the Marine Corps and of the Marine Corps itself. Ever faithful and not forgotten.&#8221;

Schwab was awarded the Medal of Honor after his death for his actions during the battle, when he was a flamethrower operator with 1st Battalion, 5th Marines. Schwab&#8217;s company was pinned down in a valley, taking heavy casualties from a machine-gun nest on a ridge. Unable to flank the nest because of steep cliffs on each side, Schwab charged up the face of the ridge despite heavy incoming fire and destroyed the emplacement with his flamethrower.

As Schwab&#8217;s company took the ridge, a second enemy machine gun fired on the Marines, killing and wounding several. Despite being low on fuel for his weapon, Schwab continued his one-man assault, taking out the second gun position. The final burst from the enemy gun caught Schwab, and he died of his wounds.

Coggins said all three will be hung somewhere on the camp to honor Schwab and inspire Marines in coming years.

The last lines of Schwab&#8217;s Medal of Honor citation read: &#8220;Although severely wounded by a final vicious blast from the enemy weapon, Pfc. Schwab had succeeded in destroying two highly strategic Japanese gun positions during a critical stage of the operation and, by his dauntless, single-handed efforts, had materially furthered the advance of his company. His aggressive initiative, outstanding valor and professional skill throughout the bitter conflict sustain and enhance the highest traditions of the U.S. Naval Service. He gallantly gave his life for his country.&#8221;